Brazil UFO files (disclosure documents) is available from two main sources that contain a large number of documents with a lot of interesting cases and investigations carried out by the Air Force dating back to the 1960s. The documents from CIA and U.S. Department of State is more peripheral and not as breathtaking as the real Brazilian disclosure documents are. 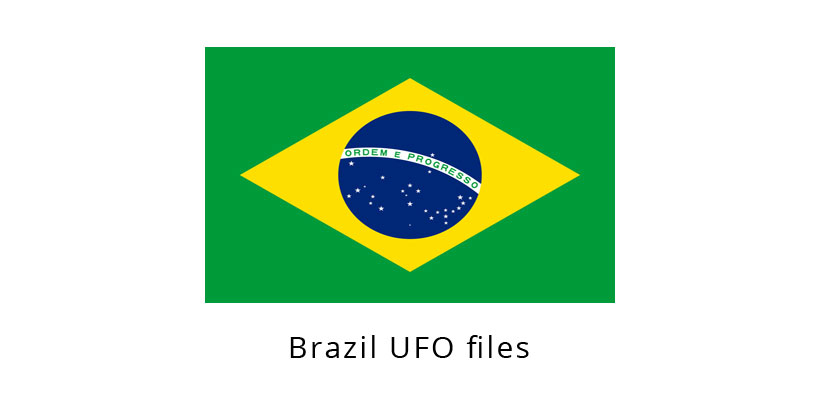 Brazil has a long history with ufology and the country was one of the first in the world to acknowledge the UFO phenomenon. All countries have their sightings and alien encounters, but the Brazilians maybe have a little more than usual. There are some pretty serious cases here which deserves to be known. The ultimate UFO event in the country may be the one that ended up as a military operation known as the Operation Saucer (Operação Prato in Portuguese) in 1977.

Brazil disclosure documents exist on archive.org as a large collection of 231 PDF files dating back to 1968. It consists of a lot of government documents stamped with “confidential” which is about different sightings in Brazil (source 1). The same resource can also be found on a Brazilian blog ufo.com.br (source 2). Language is Portuguese.

CIA documents about UFO´s in Brazil

There is a CIA document about UFO´s in Brazil titled Alleged Activities of USAF and CIA Regarding UFOs. It is sent from the American embassy in Buenos Aires in Brazil to the Defense Intelligence Agency (DIA). It has an attachment with a clipping from a local newspaper La Razon in Buenos Aires in Spanish (source 3).

Another document from CIA contains a lot of very bad copies of UFO photos, among them a flying saucer from Brazil (source 4).

The third CIA document has an attached draft letter from Mrs. Catherine Carter Golden to a Mr. Gordon Scherer dated August 15th, 1960. The letter is about a UFO picture from the Brazilian navy shown on the Garroway show. It was certified as being authentic by the Brazilian navy and released to the press by the Brazilian president himself. Unfortunately, it was labeled as a fraud by the U.S. Air Force (source 5).

The fourth CIA document is related to the correspondence between Mr. Gordon Scherer and Mrs. Catherine Carter Golden (source 6).

U.S. Department Of State has a declassified document from June 1980 about flying saucer sightings in Argentina. Document further deals with a NASA engineer of Argentine that on audio tape speaks about NASA making “Flying Saucers” in the sky as clouds (source 7).

UFO researcher A.J. Gevaerd is the editor of the Brazilian UFO magazine, founder and leader of the Brazilian Center For Flying Saucer Research, the head of the Brazilian department of Mutual UFO Network and he has contributed to many documentary films. He has been involved in over 700 field investigations and has held lectures in 29 countries including Denmark, where we have a video with A.J. Gevaerd about UFOs in Brazil. The video below has a very short introduction in Danish and then A.J. Gevaerd speaks in English. The video probably contains some of the information you are looking for.

Mr. A.J. Gevaerd has a website, the name is ufo.com.br and here you also find some of Brazil´s UFO disclosure documents.

Brazil is special because they are one of the first in the world that acknowledged that UFO´s were real. Already in November 1954, Brazil made it´s first (in the world) survey about the UFO phenomenon at the Brazilian Superior School of War. It concluded that the phenomenon was real and it´s origin not terrestrial.

In March 1969 they created the Unidentified Aerial Objects Investigation System (SIOANI) that had military personnel carrying out field investigations exactly as UFO researchers would do. It was investigations of sightings and landings of extraterrestrial spacecraft and contacts with their occupants.

The whole project was based on a large infrastructure and had both military and civilian researchers working all over Brazil. See some of the documents they produced here

So Brazil has been far in advance in ufology a long time already!

They have Resolution 551/GC3, an official government paper of August 10th, 2010. It was proposed by Brigader Junichi Saito, a Brazilian Air Force Commander. That paper is actually a UFO Sighting Law that says, that all sightings received by the Air Force in its bases and installations, and archived at the Brazilian Aerospatiale Defense Command (COMDABRA), must be sent to the National Archives for public acknowledgement.

The work carried out by the Brazilian UFO investigators is amazing. They created the Brazilian UFO Researchers Committee (CBU) and made a government UFO disclosure campaign known as Campaign UFOs that actually worked very well.

They wanted their government to open up the UFO files but wouldn´t demand all documents released through FOIA requests. Instead, they decided to request three cases where they knew the government/military was involved. This was to be sure they could not claim afterward they were not involved in such cases. And the documents began to be released, first from the ’60s, then from the ’70s, the 80´s, 90´s, etc.

The three cases CBU asked for via FOIA requests was Operation Saucer carried out September to December 1977, The Official Brazilian UFO Night on May 19th 1986 and the Varginha case that happened on January 20th 1996. Unfortunately the Varginha case documents seem not to be available.

According to an old rense.com article written by A.J. Gevaerd himself back in 2005, the other Brazilian UFO researchers involved in CBU and the Campaign UFOs are as follows:

The first original website I found was Portal Vigília. It´s about UFO´s in Brazil and was publicized back in 1996. Owner of the portal describes the site as “the pioneer on the Brazilian Internet since they were the first to bring quality, timely, thoughtful and journalistically treated information to a growing number of curious and increasingly critical internet users”.

And then I found fenomenum.com.br that has a large ufology section with a resource of cases (Portuguise). The blue menu to the top right offers a national UFO archive which seem to hold only Brazilian cases.

If you have knowledge of additional resources to the Brazil UFO files not been addressed in my article, please drop a comment.