UFO fly-by footage reveals strange condensation phenomenon in a video recorded in Denmark on June 28, 2011, at 5.15 PM local time in Odense city (map). My HD video camcorder was on tripod pointing in a westerly direction filming the passing clouds. A dark grey UFO with angular shapes and fog around it flew by and it was captured on video. The very special thing about this piece of footage, is the revelation of some sort of fog/condensation that interacts playfully with the unidentified flying object in flight.

I first discovered the UFO fly-by footage on August 24, 2018, while looking through some old videos of clouds from 2011. In these old cloud videos I encountered a lot of insects and birds flying in front of the camera. But one of the videos also contained a mysterious object that flies by the camera. Unfortunately, I have not yet been successful with the identification of this vessel. 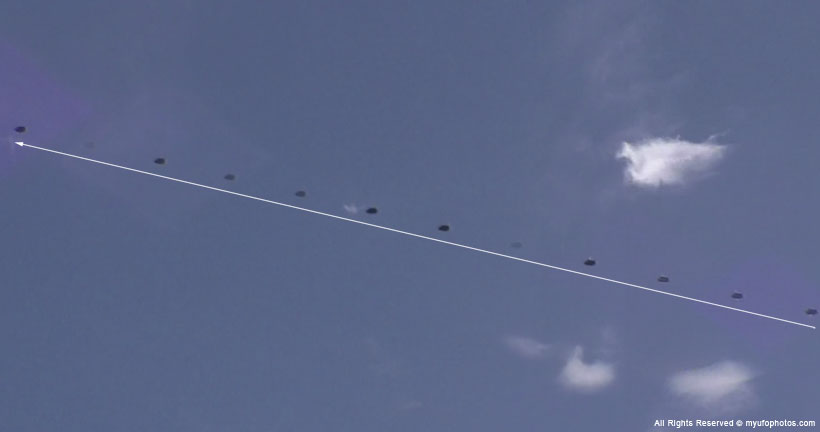 That it follows a precise straight line is not a crucial indication that the object is not an insect. But when I think about it, I have never seen an insect in cruise flight. They tend to fly in chaotic patterns and not follow a straight course over longer distances. Birds are cruising but this object does not really resemble a bird either. Insects and birds does not make vapor trails…

Object with angular shapes and the strange condensation phenomenon

The unknown object seem to have angular shapes which is visible throughout the nine individual frames I managed to get from the UFO fly-by video. But some minor changes are seen when it is flying. What made me convinced that this object is not an insect, or a bird, is the strange condensation phenomenon (fog) that is seen around and on top of this vehicle in flight.

What also made me curious was, that the unidentified flying object seems to have several dark spots on its surface. If these are openings or portholes I don´t know, but they are there and they change from frame to frame. In frame 4 below a big opening behind suddenly appears but only in one frame. One could actually believe it was some kind of transport vessel because of that opening.

In the picture above you also see the supposed condensation phenomenon (fog) on the top of the object. Actually, you can see there is some condensation beneath and around the vessel in below animation that seems to follow the object in all 9 frames.

Below fly-by animation based on 9 frames from the original video shows the condensation phenomenon and the odd object in action. Jet planes produce both natural and artificial condensation trails but not the same way as this vessel does here. There is a static manifestation of condensation (fog) around the vessel most concentrated beneath it and behind to the right. On top of the object some sort of vapor trail is seen “running” from left to right. And most interesting is the bursts of condensation/fog that is seen in frame 1 (see below) – one below, one behind and one on top and it all happens in less than 1 second.

The animation above shows the strange condensation phenomenon clearly. Short bursts of fog or something else that looks like fog is created on top, behind and below this vehicle. The behavior of the unidentified flying object is very strange. Looks like the aliens or someone else not from this realm was in the sky above Denmark that day…

The UFO fly-by was captured on surveillance footage recorded with a JVC Everio HD memory camcorder GZ-HM200 on a tripod. The camcorder was focused on the clouds which is the reason why the object seems a little blurred. Unfortunately, the UAP is not 100% in focus. The video format is *.mts and carries high definition video.

I was filming the clouds passing by in that hope I could use some of this footage as background for other videos I produce. So I made these recordings but did not find any useful material. I did not delete any of it but forgot it. Then the computer crashed and I had no access to the hard drives until August 2018. So seven years after I finally got the opportunity to look through the material and found the fly-by footage.

I had a fly-by sighting one day looking out my terrace door in a westerly direction, the same place from where I recorded this UFO fly-by footage. I saw a small dark grey UAP estimated to be around 100 meters away (or more) then it passed in front of me. It was traveling across the sky from the south towards the north and disappears just above the treetops about 100 meters away to the right of me. I only had a few seconds to see it while it passed in front of me. To me, it did not act like a bird and it was too big to be an insect. There was no sound at all. Just a little grey object that flew in a precise straight line. I wonder if that object could be the same I captured on film here?

Here on site, I have other pictures that show unidentified flying objects that creates condensation/fog. Or at least something that looks like fog? If you look throughout the galleries you will see other examples of condensation in relation to UFOs. Explore the Condensation-TAG to see them all.