Welcome to My UFO Photos. My name is Brian Jørgensen. I am amateur photographer and the author of this site, which is about authentic UFO/UAP photos I have gathered since 2009, the year I got my first DSLR camera.

My plan at the time in 2009 was not to start shooting UFO pictures or start writing about UFO phenomena. Instead, I was bothered by the visual pollution in our skies caused by commercial air traffic. I ended up taking thousands of photos of aviation contrails.

And as the years went by, the UFO pictures began to pile up.

In the first year 2009 alone I got three cases, showing unidentified flying objects in the photos. So in 2010 I decided to create a blog (UFO pictures and photos) which later evolved into this new project under the new name My UFO Photos

I have no doctoral degree, it’s just me as an individual trying to present this phenomenon to the audience with my own personal perspective. I do this in the spirit that real UFO photos should be accessible for everyone. It is not only for a small group but the whole globe. It is important for our collective consciousness and evolution to know what kind of world we live in.

When I refer to my UFO/UAP photos as authentic or real, I do it because it is real and not hoaxed DSLR images. It is something unidentified flying I can not identify. And as long there are unidentified and flying objects in the photos, it is authentic and real UFO photos. If something is identified as terrestrial or as a known phenomenon, I will let you know.

Preparation of the images

For the preparation of the images, I use the basic image processing tools in Adobe Photoshop CS4. Compared to old days manual photo processing, these are advanced tools with a lot more options. But the goal is the same; to clear up the images and make them appear as sharp and clear as possible. 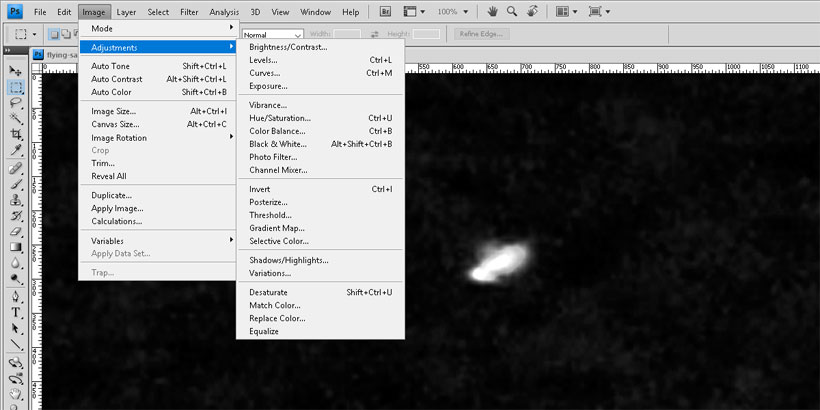 The tools I use most are Auto Tone, Auto Contrast, Negative (Curves), manual Brightness / Contrast, and Calculations. I also show you the unedited versions, typically with the hi-res original photos.

Why is the pixelation so visible in most photos?

Th reason behind the pixelation is simple. The photos have been zoomed/enlarged to better see objects that are there in the distance. The more you enlarge an image, the clearer the pixelation becomes.

I live in Denmark in Odense city. I have been autodidact web designer since 2002 and have 10 years SEO experience. I enjoy blogging and I love studying the Internet of all its possibilities. I have been playing drums for nearly 20 years and played in several amateur rock bands. I love studying Vedic Astrology (Jyotish) and have done that now and then since 1989 and still learning.

My life has been influenced by the paranormal as long as I remember. Then I was 12 years old in 1981, I got a visit from the other side. Also, read the related article about the UFO that visited the old landing site while I was there back in 2013.