Flying saucer with fast orbiting transformer probe was quite a thrilling UFO sighting. A disc-shaped UFO suddenly appeared in front of us only 150-200 meters away. It was a slim version of a classic flying saucer in the same black color as the stealth aircrafts B-2 and F-117. It hovered shortly about 5 seconds and then abruptly, but still softly, sets in motion. Subsequently, a three-minute long observation takes place. This flying disc was recorded on video and shows the craft in the distance in a short clip. 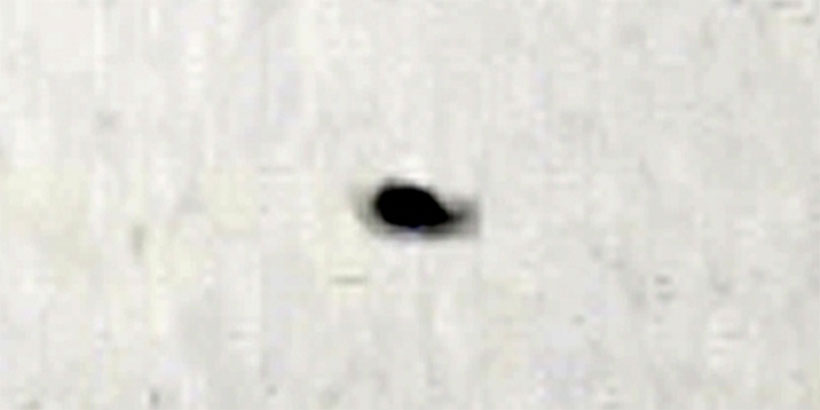 The picture above is a screenshot of one frame (1920×1080 pixels) from the original *.mts video file (see video below) played back in Windows Media Player, magnified and filtered with Auto Tone in Adobe Photoshop.

This event unfolded in Denmark in Odense city on June 19, 2012, at 1.57 pm. I was together with my friend in her allotment garden again. It was here I photographed an alien mothership with flying saucers and scout fleet under a month before this sighting.

So I was prepared with both DSLR camera and HD video camcorder. And we were taking a break and I sat there and scanned the sky like a radar – let, right, left, right…

Black flying saucer appears out of the blue

Even though I already scanned the sky repeatedly, I did not discover the saucer appearing in front of us. I did not see it come into view. Suddenly it just hangs there in the air close to the ground just above some trees. It was the classic flying saucer-shaped craft and the first time in my life (big smiley) I see this type of UFO so close.

The stealth black and quite a slim vessel stood quietly mid-air in front of us. It was without any navigation lights, numbers or type indication. There was no engine sound whatsoever and you could hear the birds sing clearly. I saw no windows or portholes on this very black flying saucer. Because of the black color one could think it was something military but not from this earth.

Strange sound from the UFO

While it hovered on the spot, I heard a sound I assume came from the vessel. The sound can best be described as a cat flap hole that claps when the cat slides through. Though with a short scratch sound just before the clap! The scratch and clap sound gave a hollow sound. Partly a metallic sound, partly a sound of some lighter material. The sound was in a lower middle tone.

Right after the scratch and clap sound, I saw something move across the hull outside the craft. But I did not get any clear visual contact. Something black moved across a black surface and background, so it was impossible to distinguish from one another.

The front of the flying saucer, or the side facing the flight direction, dived a little and it began to move. Helicopters always dive the nose a little bit to gain speed. I remember I thought with my self, that this move could easily be done by an Apache helicopter. But there were no propellers nor engine noise. Only a disc-shaped black vessel that moved silently away.

This is the moment where I try to start the JVC video camcorder. Then I finally got the video camera to record, I learned that it is difficult if not impossible to use a small display as viewfinder outside in daylight. Especially if trying to find a small dot.

At no time I succeeded to see the flying saucer on the video camera display. I was filming in blind, aiming the camera towards the object in that hope I would catch it on film. This was my first video filming experience in the field in relation to the UAP (Unidentified Aerial Phenomena). That day I learned that a viewfinder with a good eyepiece was absolutely necessary.

The video above is temporary. I will make a new video when I have the necessary equipment to do that. The references at the end of the video are outdated and not relevant anymore.

What you can not see in the video above is the secondary probe. It is a transformer probe that changes shape very fast while in orbit around the disc-shaped craft. This transformer device appeared then the saucer got a certain distance to us.

At the moment I discover the transformer probe, my immediate thought is “bird”. Somehow I wonder if this object is a bird attacking the bigger bird? It could look that way. But hey, seconds ago I had a disc-shaped black object in front of me. Now I think its a bird?

Probe transforms between Sphere and “V”-shape

Well, my brain works overtime to figure out what the hell is going on here. After a short mental hurdle with my self, I now clearly see what the transformer probe does. It transforms itself very fast. It goes from a sphere shape to a “V” shape and back again. And it did this while in fast orbit around the bigger craft. This was surely not from this world. 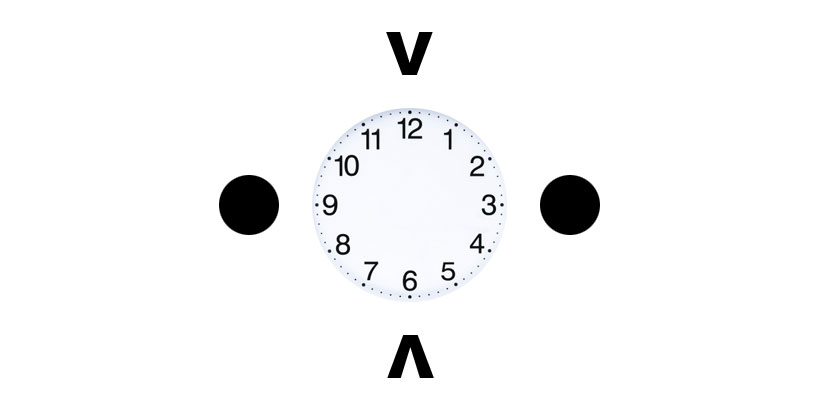 The picture above is a screenshot from the original *.mts video. It is from one of the very few frames that was usable. The probe is positioned south-west of the flying saucer and is very faint in the image, maybe because of the movement.

The picture below is the same as above, but this version is a color negative that is enlarged. The transformer probe looks like it is not complete in shape. The large piece seems to be rounded but something is missing. What you are looking at is simply very very rare pictures of sophisticated extraterrestrial technology from another world in action…

If you look closely, you will also see there are three small spheres positioned around the flying saucer which resembles the white spot in the picture. They are in a near perfect triangle formation. I did not see these under the sighting but assume they are part of the transformer probe orbital process. So, besides the white spot, which is the saucer, there are four devices flying around it.

The speed of this transformer probe and the way it changed itself, made me kind of scared a couple of days after. Then it really dawned on me what I had actually seen, it ran cold down my back and hairs stood upright on my arm.

Only for the Gods

To have things that can change shape so fast, transform itself, is only for the Gods. To do that, you must have complete control over the molecular level and maybe even beyond that. This is so far away from our level, that we can forget everything about having techs like that. We are only children here and we are not responsible enough to manage such things at all.

Rest of the sighting was done by observing the disc-shaped vessel continue in a straight line away from us. It flew with the same relaxed speed through the whole sighting, until it became so small it disappeared in the horizon.

The transformer probe continued to fly around its larger companion with the same orbit and speed. I think I am quite lucky to be in a situation where I am allowed to see such things play out. This was not the transformer movie, this was a real transformer!

While all this was on, my key witness Charlotte sat talking on her phone. Actually, she began her phone call in the second the saucer appeared and her call was finished at the moment the saucer disappeared in the horizon. She could not be unaware of what was happening with all the activity in front of her. Anyway, she claims she saw nothing?

Important to note is, that the appearance of this disc-shaped craft actually happened nearby a previous UFO landing site. It was over the same area where an unknown craft landed back in 1981 in relation to my first sighting and alien contact

Another important note could be, that I two days before this event, joked with my friend, that I could ask my alien relation to come and visit us. It was partly ironic, partly serious because I was in a period with increased alien contact. I was in touch already. And ask them (telepathically) to come and visit us, is what it is – an invitation…

Other flying saucers in my photos

This was my very first closeup sighting with a real flying saucer. But I have other photos with this type of disc-shaped craft. Object C in photo DSC00517 in the F16 UAP gallery also shows that type of craft. And while visiting an old supposed ET landing site from 1981 back in 2013, a real alien disc with portholes appeared high above the site.

The transformer I saw is new to me. I haven´t seen that before. I wish I will see it again at the right time and place…

Go back to category, category or homepage Real UFO pictures