Canada UFO files (disclosure documents) are available from the Canadian government via the National Research Council (NRC), which collected UFO sighting reports from 1968 to 1995. These reports came mostly from the Department of National Defence, the Department of Transport and the Royal Canadian Mounted Police. The documents are available via the Library and Archives Canada website and can be viewed there as images. 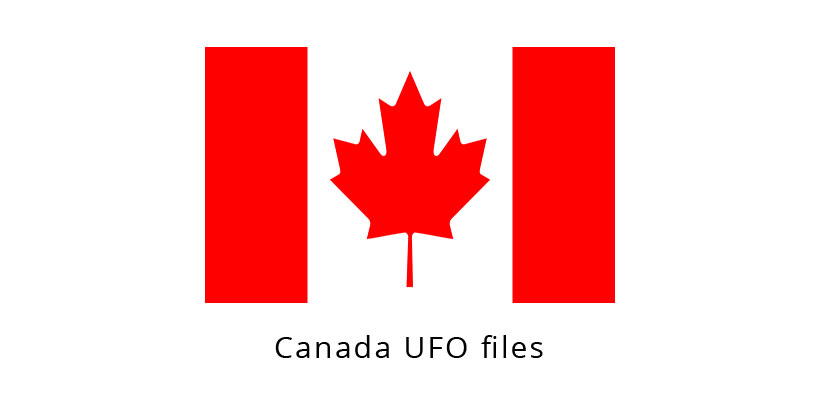 Besides the CIA documents that only mentions Canada-related UFO-stuff, there are also private sources. One individual, Michel M. Deschamps, made some of the documents he bought from the National Archives in Canada available for the public on his website.

Canada has a database that provides access to about 9,500 digitized disclosure documents from a government records collection. The documents include reports, sightings, and investigations of UFOs across Canada since 1968. The records were collected through the National Research Council (NRC), which got the Canada UFO files from different departments in the Canadian government (source 1). They also made a thematic guide, an overview, of the available documents (source 2).

Another resource that contains a large amount of Canadian disclosure documents is the NOUFORS website (Northern Ontario UFO Research and Study). The documents were bought from five 16-mm microfilm reels from the National Archives of Canada in 1996/1997. The documents originate from the now-defunct Canadian Forces Station Falconbridge (source 3).

A CIA document mentions that a Mr. Josen Takano, UFO enthusiast, investigator and director of the Hakui Center for UFO Research, a Japanese UFO museum in the city of Hakui, have bought documents about unidentified flying objects from the Canadian government (source 5). Another CIA document mentions that some unidentified “helicopters” coming out of Canada penetrated the airspace around US Loring Air Force Base in 1977 (source 6).

Other disclosure documents related to UFO´s in Canada

One of the most documented cases in Canada is the Falcon Lake, Manitoba incident in 1967. The witness Stefan Michalak claimed he was burned by one flying saucer out of two with which he reportedly touched on May 19th, 1967. It happened near Falcon Lake in Manitoba. This would be good learning for everyone, do not touch an unknown landed craft, you never know what field you enter in such a situation. His T-shirt was burned with a grid of burn marks that also penetrated his stomach. There´s a picture of him in the hospital where you can see his burned stomach.

Another big event happened in the same year known as the Shag Harbour UFO incident. Several witnesses had seen a large unknown object floating above waters and then crashing into waters near Shag Harbour in the Canadian province of Nova Scotia on October 4th, 1967. Reports were investigated by the Royal Canadian Mounted Police, Canadian Coast Guard, Royal Canadian Navy, and Royal Canadian Air Force agencies of the Government of Canada.

A search and rescue mission two days after the incident with divers did not find any crashed object, despite the fact that many eyewitnesses saw a large object crash into the sea there. Read more about the Shag Harbour UFO incident

Here is a list of UFO sightings and encounters in Canada.

Ufology Research of Manitoba has solicited sightings data from active Canadian researchers since 1989. This data is compiled into the Canadian UFO Survey and consists of several sections of data. There´s a lot of statistical data here. Unfortunately, the sightings data are no longer available since the link became a 404 (broken link) around October 1, 2022.

Stanton T. Friedman (retiring) received his BSc. and MSc. Degrees in physics from the University of Chicago in 1955 and 1956. Mr. Friedman has over 35 years of professional experience including 15 in the industry on the design, development, and testing of high-performance systems including nuclear aircraft, fission and fusion rockets, and nuclear reactors and radioisotope systems for space and mobile applications. He has worked on Pioneer spacecraft 10 & 11 which are now out past Pluto.

In addition, he has 20 years of experience as a freelance consultant, lecturer, author and broadcaster with numerous media appearances. He became interested in UFOs in 1958 and has since 1967 lectured about unidentified flying objects.

Mr. Friedman was highly involved in the documentary UFOs are Real from 1979 and the Flying Saucers Are Real documentary videos from 1993 and 1996. Mr. Friedman presentation and lecture Flying Saucers and Science is a summarization of his 50 years of UFO investigations that boils it all well together. Also see his website stantonfriedman.com

Grant Cameron is best known for his interest in the actions of the President of the United States in relation to the ET challenge. He started researching the UFO phenomenon after experiencing a wave of sightings known as the 1975 Carman flap, which occurred in Carman, Manitoba near the Canada-US border between 1975 and 1976.

Since then Mr. Cameron has been a frequent visitor to the National Archives and several other archives, among others AFU in Sweden, in his hunt for disclosure documents related to the UFO phenomena. He is the author and co-author of several books and he has a website check out presidentialufo.com (now beyondpresidentialufo.com/)

Chris A. Rutkowski studied astronomy in the 1970s and it was in this connection he became involved in UFO investigations. Calls came in about sightings and his colleagues in astronomy were not interested, so he took the calls. And since then he has been writing about his investigations and research on UFOs, for which he is best known today. Mr. Rutkowski also delves into historical UFO sightings and has been digging into government, police and military documents from the last half-century.

Mr. Rutkowski has appeared on radio programs, podcasts and documentary TV series, including Unsolved Mysteries, UFO Hunters, Sightings, Eye2thesky, The Paracast, Discovery’s Close Encounters and A&E’s The Unexplained. You can check out his blog on uforum.blogspot.com

The Canadians have a lot of websites/blogs dealing with the UFO phenomenon and here are some of them.

Michel M. Deschamps made a very good job with the Northern Ontario UFO Research and Study (NOUFORS) website. It´s a great resource that among many other things also includes government disclosure documents.

The UFO British Columbia (UFO*BC) website is rich on sighting reports going back to before 1995 to present. But in another section on the same site, in the Yukon UFO Sightings Archive, they have a timeline index of sighting reports on the right side on the web page that goes from 1930´s to 2012.

The HBCCUFO Research website is where the general public can confidentially submit UAP (Unidentified Aerial Phenomenon) sighting reports. Alberta UFO Research Group (AUFORG) is focused on the study and investigation of UFO and extraterrestrial encounters in the province of Alberta.

The ParaResearchers website has a section with UFO artciles and a massive sighting archive from Ontario. There is the webpage titled UFO ROUNDUP ARTICLES with a lot of articles about UFO sightings and more.

Canada TV News has a section about UFO sightings mostly from Canada but also from the rest of the world.

A Canadian-French site Ovni Expert in French has a map top right you can click on and see recent sightings (with descriptions) in Canada. Another site in French is the Association Québécoise d’Ufologie AQU — Organisme Ovni au Québec.

Another Canadian-French site is using the abbreviation GARPAN but what it stands for is a mystery. There is no About-page that explains what it is. But they have an interesting section with investigations of UFO´s in Canada.

If you have knowledge of additional resources to the Canada UFO files not been addressed in my article, please drop a comment.