Strange flying creature / UFO sighting on DSLR photography, is the story about a creature sighting one day that initiated new photo-sightings the next day. It started with a butterfly that stopped me in my track three times. That was the actual forerunner for the sighting I had seconds later. Next day I went to the site again with my Canon EOS 60D DSLR camera. And that produced 173 photos that caught over 30 unidentified flying objects (UFOs) including the strange flying creature here. 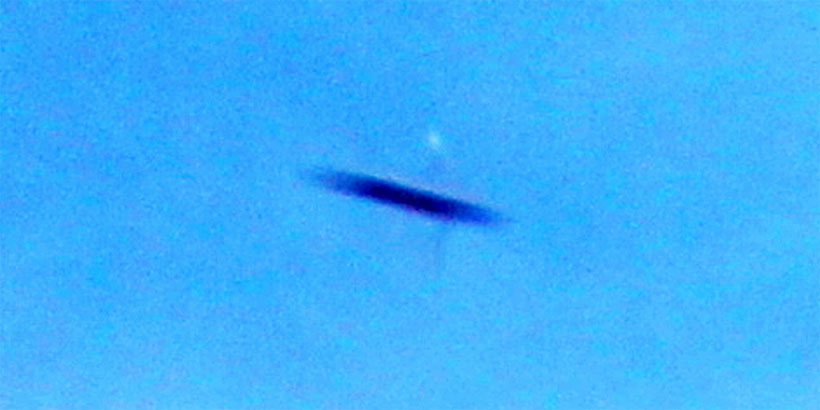 On May 24th 2017 in Denmark, Odense city, I had a UFO sighting with a strange flying creature. The day after on May 25, 2017, I was lucky to catch the same strange “alien” being on the photo (above). It looks like a flying fish with fins (or wings) just behind its head. The creature sighting and field investigation resulted in maybe worlds largest UFO fleet photo-sighting archive for just a single event.

On May 24, 2017, I was out walking with my mother´s dog. As always, we are entering a secluded pasture with trees all around where the dog can run freely. Usually, I go from the entrance near one end and up to the other end of the field, following a very narrow path approximately 15 cm in width. I never experienced strange things here, but this time was different.

The butterfly came in from the right, landed and sat there in front of me a half meter away for the third time. It was perfectly positioned in the middle of the path. This butterfly´s ability to position itself with that precision could simply not be ignored!

I became aware, that there might be something trying to prevent me from continuing further into the pasture. It may sound silly, but I really believed the butterfly in front of me was a sign and I chose to respect it.

I stood still and observed the field in front of me, trying to find the answer why I should stop here? The dog was running around in the other end and everything seemed normal. But then I saw something very very strange, I had a creature UFO sighting.

A transparent fish-like creature about a half meter long (above) flew up near the dog 35 meters in front of me. It actually flew slowly compared to ordinary birds, typically partridges, flying somewhat faster and are pretty noisy when the dog scare them up. This one flew upward slowly without noise in a straight 35-40 degree angle. It was flapping with its wings, but the movement of these wings seemed not to match its actual flying. Somehow it looked like it was moving underwater (like) in mid-air. 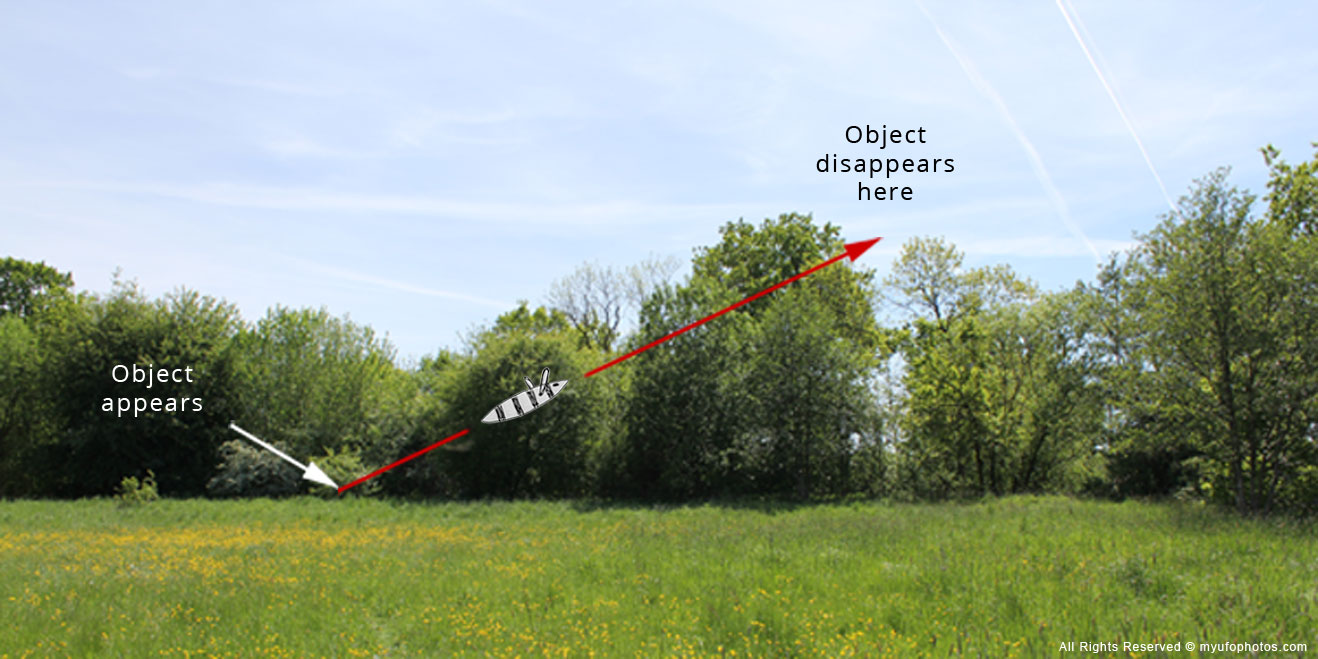 This strange creature flew in a precise straight line upwards. Its body seemed not to be under influence from the movement of the wings. No inertia seemed to move the body up and down as you normally see with birds.

I could see it with the trees as background on its path upwards. When it reached over the trees and got the sky as background, it disappeared. The strange thing was, that it seemed transparent and dark areas on its body was flickering weakly but fast. And because of the low light flashing, it looked as if the dark areas moved both forth and back across its body. The closest I can come to describe the flickering alone, is the self illuminating deep sea creature Rainbow Jellyfish

It was flying and looked like a fish with small fins close to its head (see creature UFO sighting drawing above). But those fins do not seem to be able to carry the relatively large body. There must be a problem with the balancing unless the rear part of the body weighs nothing. The way it flew was like out of sync with our laws of physics.

Down the rabbit hole…

You know, first the weird thing with the butterfly and now a transparent flickering flying fish? Gates to the paranormal world seemed wide open. Felt a bit like Alice in Wonderland, all the way down the rabbit hole.

Unknown forces seem to have entered the grass-field and prevented me from getting too close apparently. Or was there another reason why I should not enter the field that day? Was it to prepare me to observe at a distance?

Because of the butterfly, I was ready to observe then the sighting happened. If it had not been for the butterfly, I would maybe not have seen anything that day. This thing was transparent and in broad daylight, you could easily miss this thing. But I was looking in the right direction when it happened.

The dog was pretty close to the odd flying creature then it flew up, but seemed unaware of the situation. The dog was not hurt or anything and is with us in writing. Nothing more happened at the site that day and I went home.

The strange flying creature UFO sighting is a new facet of the extraterrestrial paranormal presence in my life. It is much different compared to all the other UFO sightings I have had. This was an unknown animal of some kind, not a machine and probably not terrestrial.

In 1981, then I was 12 years old, I had my first UFO sighting and alien contact. It started my journey into the alien paranormal world. In 1987, I saw a low-flying Boeing 747 that passed right above me. High above me and the plane, there were three luminous objects flying in a triangle formation. In 1994 I had a sighting on a warship in the North Sea while I scouted after enemy submarines in a military exercise. Then in 2012 a black flying saucer appeared in front of me and a friend. In 2013 I visited the old UFO landing site related to my very first sighting back in 1981. While I was there, a flying saucer appeared high above me.

And now this alien creature that was not from this world. The weird thing is, that I think I saw the same strange creature in a Youtube video with the space shuttle. A surveillance camera captured the same creature in the area just behind the main engines under a launch. It was sniffing around and moved rapidly like a hummingbird. I was convinced that I had seen it on youtube, but a search after this particular video gives no results? It was one of the very last shuttle launches, if not the very last one. But now I am in doubt.!? I must have dreamed it, had a vision or the video clip has been taken down.

Strange flying creature is an insect?

What I saw on May 24th, was a ½ meter long (or more) fish-like creature that flew up from a grass field. The thing in my photo from the day after on May 25th (that some says are an insect), is very very close to what I saw live under my UFO sighting. I do not believe this is an insect. I am pretty sure this is the actual creature I saw with my own eyes! The creature UFO sighting was real.

I thought it was a good idea to ask someone who knows something about insects. It could be interesting to hear some expert opinions about this. Maybe they could tell what is in my photo? I found the Bugwood Image Database, which is a place where you can upload your insect images and get them identified by experts. So I did that on August 12, 2017.

Bugwood Image Database is a project coordinated by the Center for Invasive Species and Ecosystem Health at the University of Georgia. They rejected all my image uploads. I tried several times but the images did not meet their criteria.

But I was lucky to get through to ask Professor Jim Hardie, Director of Science, Royal Entomological Society, about the thing in my photo. I send him an email asking about the strange flying creature and promptly I got a response the day after.

I thank professor Jim Hardie for his fast response. Unfortunately, it seems that the identification of this odd flying creature is impossible…

If you study the pictures below, you will see that the body seems transparent in both ends. That could possibly be the effect of the movement. But when you look at the wing with the white spot at the end, it does not seem to be so much underlying the effects of movement. There seems to be no correlation between the body’s alleged movement and the possible movement of the wing. The wing should, in my opinion, be as veiled as the body is at both ends. But the wing is not blurred to the same extent. 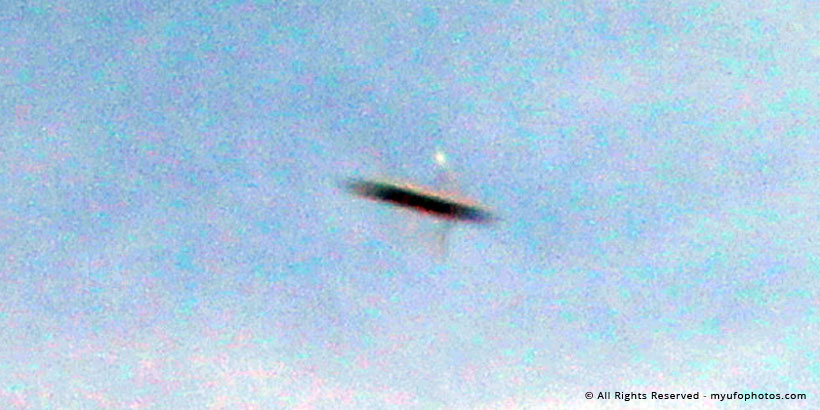 Below you see exactly the same strange flying creature as above. Below picture shows a calculation in Photoshop and the image is inverted. You can see the tip of the wing has the same mass as the middle body and is not transparent at all.

The object IS moving in the photo. But is the transparency really caused by movement alone? Based on my UFO sighting the day before, this strange flying creature is moving towards the right. And it was transparent with dark flashing stripes.

The cool thing about DSLR photography is the high resolution. My Canon EOS 60D produces 5184 x 3456 pixels / 18 megapixels images. Even very small objects in the image that hides in the clouds can be found and magnified several times.

The pictures above with the strange alien fish-like creature comes from a photo that also contains four other unidentified flying objects. And that one photo comes together with 172 others from the field photo investigation on site May 25, 2017.

The field investigation was to see if I could catch something with DSLR photography. I did not have any visual contact while I was there. But I did catch unidentified aerial phenomena in abundance including the strange flying creature here.

Around 50 of the 173 photos contain clear unexplained phenomena including the strange creature above. All these hi-res photos and related pictures are shown in a massive photo and picture gallery. Click the link below to see!