Large sphere UFO stationary in the sunset is the very first pictures of unidentified aerial phenomena (UAP) I shot with my first and new DSLR camera. The large sphere in below images could be in the size of a large building. This may not be ET space aliens from another planet, because there is a possibility that this is a meteorological phenomenon. This photo-sighting happened on September 13, 2009 at 7.36 pm local time in Denmark above Odense city (map). 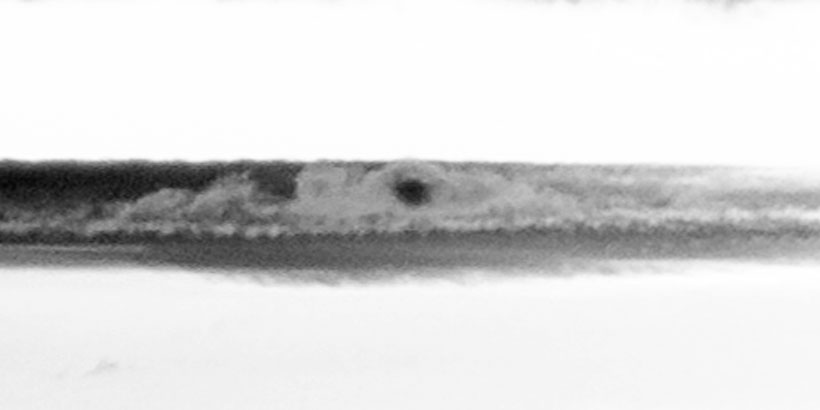 I was on my way home on bicycle from a visit with my mom. I had my new Sony Alpha 100 reflex camera with me. Not with the intention to shoot UFO pictures, but merely just to photograph and learn to use my new camera.

I stopped near Niels Bohrs avenue in Odense and took several pictures of a beautiful sunset. But without discovering a spherical object that sat stationary on a cloud-stripe in the western horizon some kilometers away. I went home.

Some days after I looked through the sunset photos. I deleted some of them because of bad photo quality and ended up with four images. While studying these images, I noticed a dark spherical object sitting the same place on the same cloud-stripe in all four photos. I could not believe it. There was a large sphere UFO sitting on a cloud in the sunset… 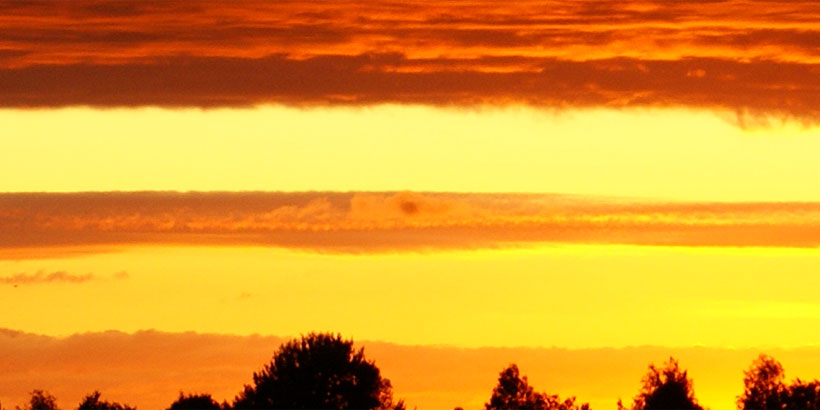 When I magnified the sphere I realized that, if not a meteorological phenomenon (or a shadow), I might have found a large spherical object in the sunset photos. It definitely looks like a large sphere that seems stationary. It is hovering on the cloud-stripe with something that looks like it´s own cloud system around it, made up by some lighter colored clouds/fog.

I would like to see how the sphere behaved from the time when I shot the first picture to the time I shot the last and fourth picture. The 4 best photos were taken in a series with few seconds between, a perfect setup for a short cloud animation. The images are played back by 0.8 sec. intervals. The animation shows a dark spherical shape hovering in a stationary position, while the surrounding clouds drift past both in front and behind from left to right.

Also, notice the fog around the sphere. It seems to move very little in the animation, while clouds ahead and behind moves much faster. The fog seems to be in an area without wind. It looks a bit ghost-like to me. Maybe just a meteorological phenomenon created by a shadow from darker clouds behind? See same animation with colors here

To find out if the large sphere UFO is a meteorological phenomenon or a physical object is impossible. I know with my experience and the more than 7000 sky pictures I have taken, that clouds can display anything. Actually, you can see the sky as a large holographic screen, where all kinds of shapes can be formed and manifested by clouds.

What makes me believe there can be a physical object here, is because it is stationary and clouds are drifting by both ahead and behind. It seems not to be affected by the passing clouds but is solidly planted on its position. There is no clear visible indication, that this sphere supposed to be a cloud system or a shadow, is going through a process of being dissolved.

It is not so convenient for me with a large spherical UFO partly hiding in a cloud since it is hard to distinguish. In another example with some unknown activity in front of a contrail, it is much easier to decide if there is an object or not. Judge for your self, whether the stationary sphere here is a local thickening in meteorological sense or a real physical object?

Dark spot is dust on the lens?

Photos were not taken with the same angle. I had the camera in hand, not on a tripod, and changed the angle a bit while shooting the pictures. That´s the single reason why I think dust on the lens as an explanation cannot be relevant.

Dust would reveal itself when it is fixed in the same position on the lens / in the image frame, as a second layer. The dust particle would probably stay in that same place while everything else that is photographed will move around slightly in that same frame. Dust is easy to spot, you don´t need a science degree to figure that out.

Sphere UFO the size of a large building?

The spherical object in the photos are not 100% in focus, but very close. My actual target was the red-orange colored clouds right above the sphere, which seem to be closer to the camera than the stationary sphere UFO located only a few degrees above the horizon.

I do not know the distance to the cloud stripe which the unidentified aerial phenomenon (UAP) is sitting on. I guess it is at least 4-5 km away from my position, and it tells something about the size of this sphere. How big this thing really is can be a difficult question. It is not car-sized, more in the size of a large building I guess.!?

Other spherical UFOs in my pictures

Besides the spherical phenomenon in my pictures there are also some weather-related cases. Among them the strange cloud manifestation inside another cloud. And a very odd sky phenomenon where a small cloud ended up as a very weird structure.

This photo sighting was reported

This large sphere UFO photo sighting was reported to MUFON and SUFOI, and in connection with reporting to SUFOI, were 2 of a total of 4 images evaluated by John Cappelen on DMI (Danish meteorological Institute). Case in SUFOI’s newsmail No. 112

SUFOI’s Photo Department turned naturally to the Danish Meteorological Institute, DMI, who are experts in this type of phenomena in the sky.

The pictures do not tell me much beyond the purely meteorological. One can always find weird stuff on sky pictures – then by analyzing them … and things that are seen also depends on the eye of the beholder.

In meteorological terms, clouds in the picture were attached to a front that separated cool air with rain over southeast Denmark from warmer air to the northwest. There was no altocumulus or altostratus, some places with a little structure and localized in two layers. With a little effort, you can also see a single short fall-stripe.

The dark stain that has not changed between the two images, is in my opinion due to a local thickening, eventually the shadow by a cloud behind.

So there is after DMI’s expert opinion no doubt, that the dark pattern is a local meteorological phenomenon that only in this case has come to look very strange in the photographs.

I am glad that climatologist John Cappelen from DMI has seen some of the pictures. From what I understand from his statement, he concludes nothing but just feels that it may be a local thickening, perhaps the shadow of a cloud behind. My own personal experience with photography in general, in light of the over 4800 images I have taken so far of clouds and cloud formations, tells me, that John Cappelen’s presumption may well be correct.

But you should also just remember, that his opinion is an opinion and not a solid scientific conclusion on anything, but merely a presumption and the door is therefore still open to more possible explanations. So I am not satisfied with SUFOI then they, on John’s Cappelen´s behalf, draws the conclusion, that there is no doubt, that it is merely a local meteorological phenomenon..!

I used a standard lens (3.5-5.6/18-70) and the focal length of all four photos was 70,00(mm). If you study the photos in the list below, which is the non-cropped full-size originals, it might give you an idea of the distance to the UAP.