Chile UFO files (disclosure documents) are only available in the format of two photos and a military video. There are no paper documents about ufos from the Chilean government. The only documents that are available come from the U.S. Defense Intelligence Agency. But Chile has its own government office dealing with unidentified aerial phenomena. 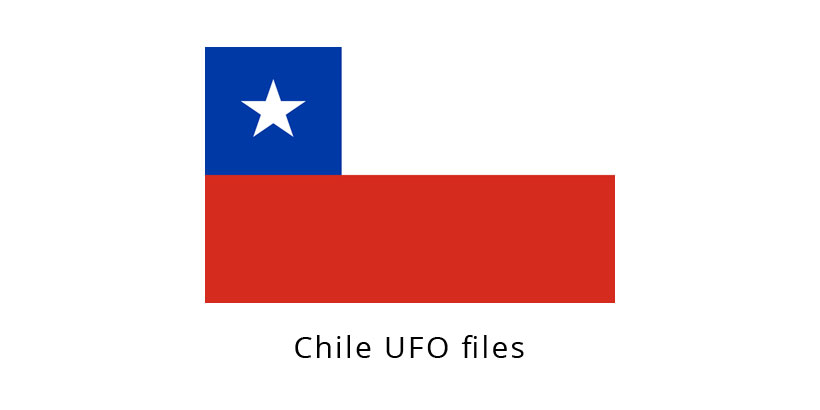 The Chilean government passed Law 20.285 known as the Transparency Law on August 11th 2008. It works similarly to the Freedom of Information Act (FOIA). Except for matters affecting national security and foreign relations, the Transparency Law was created so government agencies can act in an open and transparent manner, even in cases with no queries from the public. But despite all the fine words, there are no paper disclosure documents released so far.

Committee for the Studies of Anomalous Aerial Phenomena

The government office investigating UFOs in Chile is the Committee for the Studies of Anomalous Aerial Phenomena with the Spanish acronym CEFAA. CEFAA is located within the Department of Civil Aeronautics with the Spanish acronym DGAC and that is under the jurisdiction of the Chilean Air Force (FACh). CEFAA is responsible for analysis of reports of unexplained aerial phenomena in Chilean airspace, which in most cases comes from pilots and aviation personnel.

CEFAA seems to be the only place where you can report a UFO sighting. Three days with research on Google in Spanish gave no other results than CEFAA. Reports on anomalous aerial phenomena can be reported here.

Since CEFAA is the only reporting site available, they may sit on a large amount of Chilean UFO files still not released to the public. Among those cases is the Paihuano UFO crash incident. Some of the cases< are available on site but it is actually a small archive. See the cases in English here.

The first official study on UFO photos in Chile came from CEFAA and is known as the Collahuasi Case. It was released on their website on July 31th 2015 and deals with two photos with a luminous disc-shaped object hovering on a clear blue sky over the Andean plateau in Northern Chile. The photos were taken at a copper mine 14.000 feet above sea level back in April 2014 and later sent to CEFAA for analysis (source 1 & 2).

A Chilean Navy helicopter was on a routine patrol on November 11th 2014. The helicopter followed the coastline to the South Pacific Ocean in a northern direction. On board were a Navy Captain and a Navy technician which both observed the unidentified flying object, both visually and through the attached FLIR high-definition camera.

The FLIR (Forward-looking infrared) system is used for thermal imaging, night vision, infrared (IR) and ordinary HD camera. It gives an operator a fine spectrum of optical filters for image analysis on the go and in a lab. As you will notice in the video below, the unknown object is almost invisible when seen with the HD camera. First, when viewed with IR (infrared) the object stands out clear in the footage. For some unknown reason, the UFO could not be tracked on radar.

The special thing about this footage is, that the unknown flying object rejects an unknown substance that leaves a trail behind the object. The substance was ejected over the south pacific ocean. Everything was recorded on FLIR video and it was investigated by CEFAA. But after two years of investigation, they were still unable to find a logical explanation. Chile declassified the military video and made it public on January 6th 2017.

The helicopter crew could not identify the strange object despite the incident lasted for over 9 minutes. The unknown intruder was classified as Unidentified Aerial Phenomena (UAP) by CEFAA. Read Leslie Keen´s in-depth article about the incident.

Two PDF files from the U.S. Defense Intelligence Agency (DIA) contains 288 pages. Some of the pages are unreadable, but the section with 6 pages (page 36-41) dealing with UFO´s in Chile is easy to read (source 3).

Chile has it´s own UFO crash incident that happened near the Paihuano town. On October 7th 1998 several locals, including peasants, teachers, housewives and city officials witnessed an unidentified flying object, silvery in color, hovering near one of the hillsides of Cerro Las Mollacas mountain (article).

According to witnesses, it made a sudden turn and split into two parts, which both crashed on the mountain. Half an hour later the entire area was under military control. The public liaison officer of the municipality of Paihuano wanted to comment on the crash incident at a press conference. But he received a call from a presumed NASA official who begged him to cancel the conference and keep quiet. The mayor of the town agreed to the request while waiting for more information, but as expected, it never came. What really crashed on that mountain is still a mystery.

General Ricardo Bermúdez was the director of CEFAA until December 31th 2016. The Chilean Air Force General, now retired, was also Director of the Technical School of Aeronautics, the School of Engineers and the sub-Director of Chile’s Air Force Academy. General Bermúdez is a former fighter pilot and he commanded the Third Air Brigade in southern Chile. That´s the reality in Chile, an air force general working with UFO research in military auspices.

Mr. Bermúdez actually created CEFAA in 1997 which became unique in the world with its combination of top scientists from different universities, senior officials from all branches of the armed forces and police, and technical personnel of the DGAC.

Center of Studies and Research of Anomalous Phenomena of Chile

Center of Studies and Research of Anomalous Phenomena of Chile (CEIFAC) is an independent non-profit group that has operated since 2006 in the city of Concepción. It has 3 main offices respectively in Antofagasta, Concepción and Temuco. The CEIFAC group is composed of self-taught researchers and amateurs of anomalous phenomena. They aim to study, investigate and disseminate topics considered anomalous such as UFO phenomena and paranormal phenomena, see their archives

There is a research network in Chile but they are only on Facebook, not via a Page but a personal profile. And there is no information about all the supposed members visible in the profile image. Who they are is the big question. I can only confirm that their presence on the internet seems to be equal to zero.

The Ovnivisión Chile group is dedicated to the investigation of the UFO phenomenon. They also organized the Ufology Symposium and World UFO Day that took place in the cities of La Serena and Paihuano in the Coquimbo Region in Chile 2017. The ovnisrancagua.blogspot.com blog is mainly destined to inform about the UFO casuistry and associated phenomena that occur in the O’Higgins Region, Chile. The aion.cl website has some cases from Chile to offer, among them is an in-depth analysis of the Collahuasi case. The acanopus.wordpress.com blog deals with ufology and investigations based on rational procedures. The donmaor.blogspot.com blog is dedicated to the UFO-related literary review and commentary on the extraterrestrial hypothesis within the ufology. All these websites and blogs are in Spanish.

If you have knowledge of additional resources to the Chile UFO files not been addressed in my article, please drop a comment.