Vertical UFO cause displacement of sunlight is about an unidentified flying object above Denmark I photographed on December 19th, 2009 just after noon. One photo reveals a foggy object hovering in the middle of a contrail. Another photo shot 14 minutes later shows the same object probably much clearer with the blue sky as background. This is not just a light in the sky, this phenomenon is highly unusual. It does not reflect the Sun as expected and it leads me to believe this object somehow causes the displacement of sunlight.

In this case, Sun shines from the left. That means that all surfaces pointing towards left will be hit by sunlight and reflect it more or less. The above picture shows the object with the blue sky as background. It seems non-reflective on the surface pointing towards the Sun (left) and the surface that points away from the Sun (right) lights up?

I did not have a live UFO sighting here. I shot the photos and found this strange light phenomenon later. Now let’s take it from the beginning…

The weather was perfect for a meteorological photo shoot. A blue sky as background always makes white clouds and aviation contrails appear clear and beautiful in the photos. And that was the actual reason for the photoshoot. The first photo I shot at 01:08:10 pm shows a contrail that has spread out in the sky. There is no unusual object to be seen, see below image.

18 seconds later at 01:08:28 PM I take another photo of the same contrail. Now an unidentified flying object in the form of a foggy but bright sphere has appeared in the middle of that contrail, see below (click image to enlarge).

You can clearly see there is an object but where did it come from? Just suddenly there is a light in the sky?

Below picture is a cropped and magnified version of the aerial phenomenon from the above image. The phenomenon is behind or inside fog from the contrail and displays foggy in the image as a vertical structure. As you might see, this unusual object´s left side seems to be in shadow and the right side is bright? 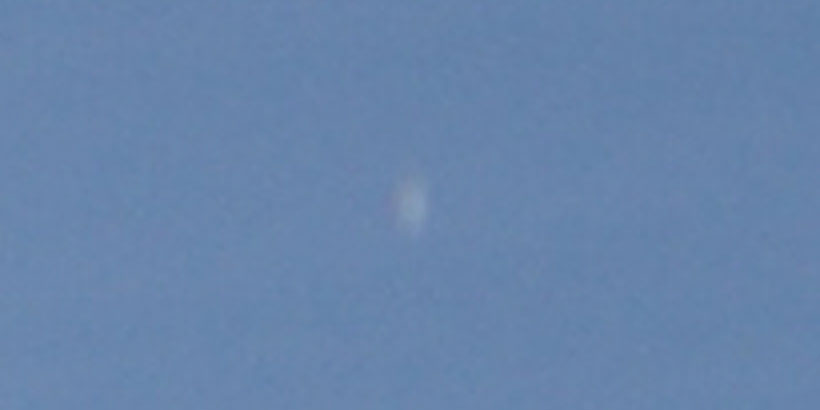 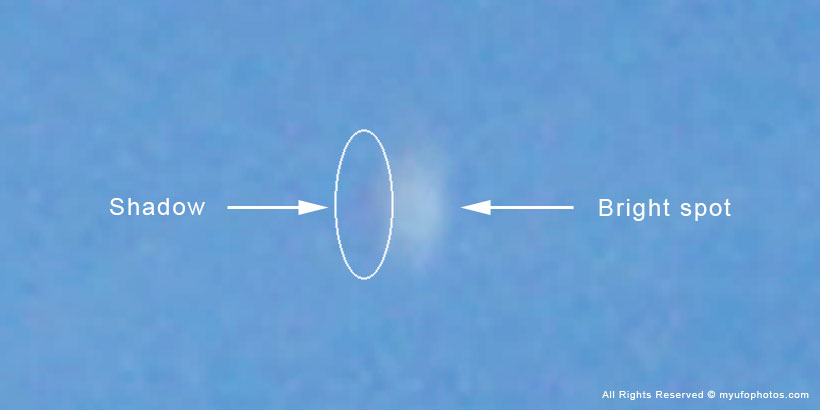 If this UFO causes the displacement of sunlight or if it has an independent source of light I can not know. What could be the most logical answer here? If it emits it´s own light, it must be pretty strong since it is visible in broad daylight while bathed in sunlight. And if it has it´s own source, where does the energy come from? This is not a tiny flash from air traffic lights. This is a large glare compared to airplane´s flashing navigational lights, which you only tend to see when it is dark or at dusk.

Since I did not have a live sighting, I took a short break from the photography. Then 14 minutes later at 01:22:38 PM I shot another photo. And that photo reveals this unusual vertical UFO is still up there, now with the deep blue sky as background. Still shows up like if it displaces sunlight. And it has moved a relatively short distance across the sky (see below illustration). 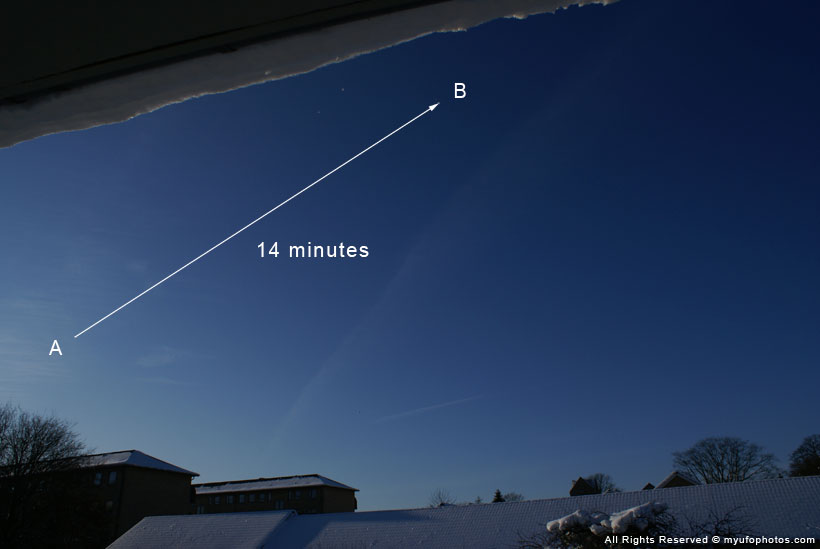 The illustration above shows the path of the phenomenon starting from point A traveling to point B in a 14 minutes period. We are looking southwest in the above photo from this position and the visitor moves in a northern direction.

I am convinced it is the same object since the special displaced light feature seems to repeat both at point A and B. Sun shines from left and this phenomenon is dark on the left side and bright on the right side? So it must be the same object.!? 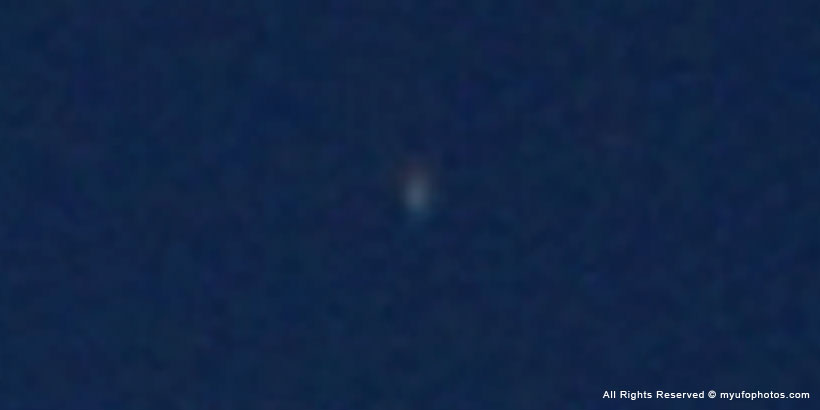 The unedited picture above shows the aerial phenomenon at point B with the deep blue sky as background. It is very small in the photo only saved on the finish line by the relatively high resolution. It seems to be very high up. 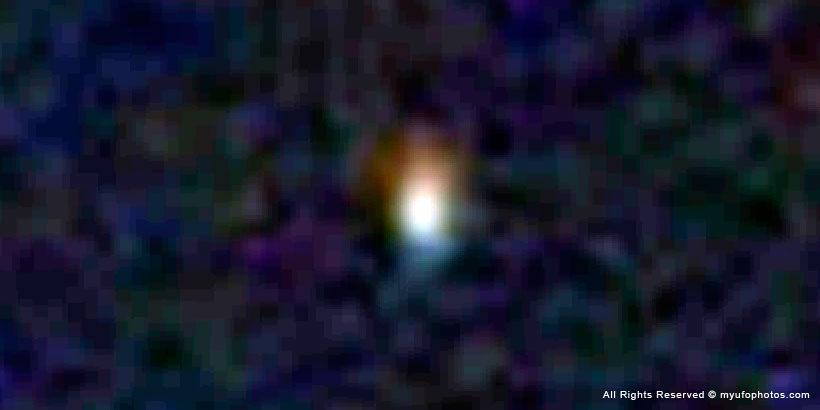 Above picture has been processed in Adobe Photoshop with Auto Tone and magnified to the limit. If you magnify further the whole thing gets blurred. As you might see, there is a reddish-orange top and a bluish-green bottom with the bright spot in between. To me, it looks like a vertical structure with a bright spot in the middle and a triangular shaped top and bottom.

To be sure the suspicious reflection on the right side really is on the right side, I made a so-called “calculation” in Photoshop. This was to increase the intensity of the light. As you can see below, the arrows are pointing to the middle of this vessel. And the light is really positioned slightly to the right of the center away from the sunlight. So it can not be a reflection of the Sun!

The weird light-shadow relation confuses me to think this thing really displaces sunlight. But I think the most “logical” explanation must be that it emits light by itself. There is no active second Sun radiating sunshine from the right even though it looks like this.

But it is also impossible to explain how this phenomenon can have a glare strong enough to be visible in the sunlight just after noon? The glare has to be as strong as sunlight or maybe stronger I think. I am no expert in the physics of light but this is highly unusual. It is so unusual that even the displacement of sunlight seems reasonable. 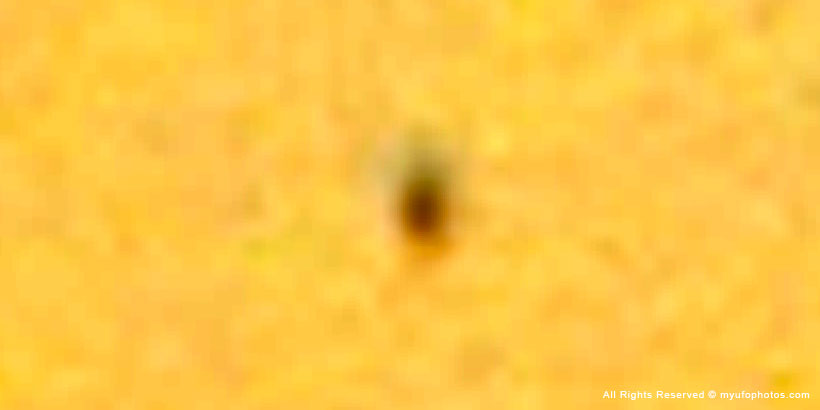 The above picture has been processed with Auto Tone in Adobe Photoshop and changed to a negative. Light is dark and vice versa…

Just the fact that there is a light in the sky visible in broad daylight is a mystery. This is not a tiny flash from an aircraft. This light fills a bigger portion of the vessel, exactly as if it was a reflection of sunlight.

The two contrail photos higher up in the article reveal nothing about if the bright spot was pulsating or rotating. The displacement feature seems stationary on the right side in both photos.

The object in the contrail and the object with the blue sky as background was photographed with 14 minutes interval. The first photo was shot at 01:08:28 pm, the second at 01:22:38 pm just before it went over our house. It seems that it slowly traveled this non-ecliptic path from a southwestern direction towards a northeastern direction. And that is a much different path than the ecliptic, which the Sun, Moon, planets, and Zodiac tends to follow.

The international space station sometimes comes in from the south-west flying towards north-east when it reaches Europa. But the vertical UFO here made a more northern fly-by coming more strictly from the south. Yes, there are terrestrial satellites with south-north orbits but are they visible in daylight like this one?

The altitude of this thing is unknown. In the first photo, it seems to be behind or inside the contrail, since it displays foggy there. It must be very close to the contrail. But on the next photo 14 minutes later the phenomenon seems to be very high up. It is very small in the photography and only visible because of the relatively high resolution of the image.

There were no celestial bodies visible in the southwestern sky at that time just after noon (Stellarium).

It does not look like an airplane or helicopter to me. I have never seen such a large reflection from a known aircraft ever. Reflections from planes seem to be volatile. If there was a helicopter positioned so that it reflected the light towards me both at points A and B, would also be pretty strange. And I do not know either any type of terrestrial vessel that displaces electromagnetic radiation (light) in the visible spectrum.

My first thought actually was the international space station (I.S.S.). But a check on I.S.S. Historical Lookup, reveals the space station was over the U.S. west coast at that time. That is thousands of miles away from Denmark where the actual sighting happened. What else could it be if we think terrestrial objects in orbit around earth? It cannot be Mir spacestation, because it re-entered Earth’s atmosphere on March 23th 2001, and this sighting happened in 2009.

Mr. Bigelow, the billionaire with his company Bigelow Aerospace, has been talking about building his own private space station. If he already build one and launched it in secret I don´t know. But he has just announced that he will launch a company that operates space stations. They will be used to sell hotel reservations in space. But since this business recently started on February 20th, 2018, the vertical UFO may have another origin?

Other individuals and companies are building spacecraft today, just look to Space X and Virgin Galactic. And there are more rich people out there who plan to make space travel possible. But none of them had anything ready for launch in 2009.

I think this vessel is extraterrestrial. I can not think of anything terrestrial that comes near the special light feature? It is a phenomenon we should not see in our skies. Vehicles and devices that play God with our sunlight are not terrestrial but has to be extraterrestrial if you ask me. A vessel that displaces light is impossible to explain. A vessel that shines by itself like this one is also impossible to explain. It is obvious that this is not just an ordinary light in the sky…

Sunlight is said to be electromagnetic radiation that maybe could be displaced, or bent, with the right technology? It happens in space already when you look deep into space. Starlight is bent and curved by galaxies, black holes, stars, and other space phenomena before it reaches us here on earth.

And who knows, the vehicle I showed you here is probably extraterrestrial of origin and radiates a field that disturbs light, displaces it, so it looks strange to us? The down to earth terrestrial explanation, wherever it is, is to me, pretty far away here.

This article Vertical UFO cause displacement of sunlight has been re-written on JAN 21 2019.