Show me a picture of a UFO was a high-value search term on Google some time ago. I think its the perfect heading for an article about authentic UFO pictures. And not to sound too arrogant, but I think I have some justification to respond with an article…

I am amateur photographer with an archive of over 7000 photos of clouds, aviation contrails, and other weather-related phenomena. It is DSLR photography I have gathered since 2009 and still collecting. In some of my photos, unidentified flying objects (UFOs) or the so-called unidentified aerial phenomenon (UAP) reveals itself nicely. 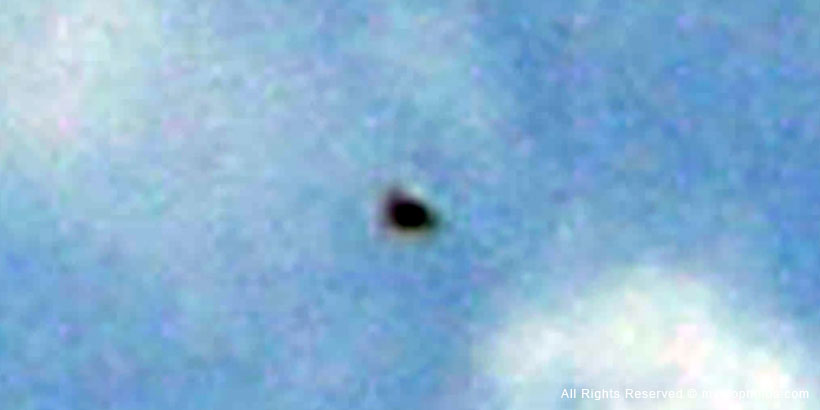 The picture above was taken in relation to an apparent F16 dogfight with unknown counterpart over my city on July 6th 2010. I had the camera with me when I heard the roar of a jet fighter above me. I began shooting pictures and up to 15+ different objects including something that looks like an F16 Viper posed in the photos. See the related F16 jet fighter UFO/UAP gallery

I show you my best photos

The sky photos I have taken since 2009 has to date produced 16+ cases. On most occasions, I did not see the objects during the photography. It was only afterward I discovered them in my photos. And I cannot identify the unknown vessels as terrestrial. So when you ask the question “Show me a picture of a UFO”, I feel I rightfully can respond and show some of my best UFO photos.

The pictures in this article have not really been taken in an intentional hunt after alien ET vehicles in the sky. In the beginning, the pictures were taken primarily because I was bothered by the visual pollution in our skies caused by air traffic. My concern later evolved into a general admiration of clouds and other weather phenomena and the UFO pictures began to pile up.

Show me a picture of a UFO (cigar shaped object)

My camera was usually pointed to the sky, also on October 9, 2009, where I spotted a Sun halo. I took 8 photos right after each other, and in one picture an elongated UAP appeared inside the solar halo. It is amazing photography with the cigar-shaped UFO and a commercial airliner together with the Sun halo as background. It´s a magnificent sight. 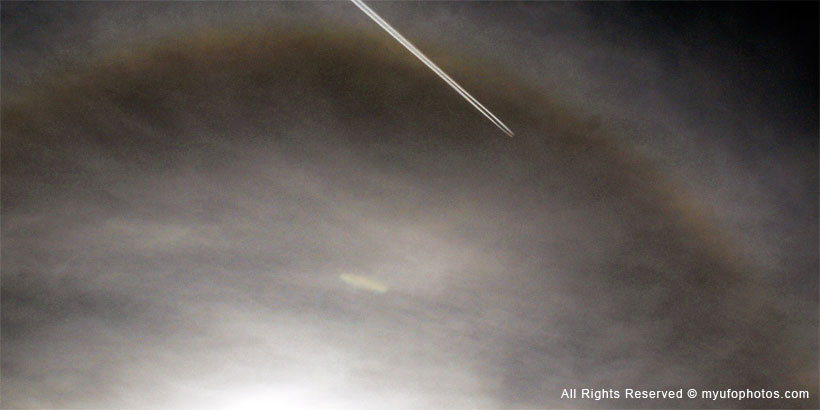 It was only visible in one picture and had 2 seconds to pass the sky! So it´s not a balloon. I checked if it was a solar lens flare but it seems not to be just a reflection of light. It is not transparent. It seems to be a fuzzy metallic object. At first glance, it looks cigar shaped, but when you look closer it is more in the shape of a pressure tank. Read more here

Show me a picture of a UFO (flying saucer)

In relation to my very first sighting back in 1981, which involved the landing of an unknown craft and face to face alien contact. I took off to visit the suspected UFO landing site on August 9, 2013, with all my camera equipment. My intent was to document the area and take pictures of everything that seemed strange. A flying saucer appeared in the sky high above me. 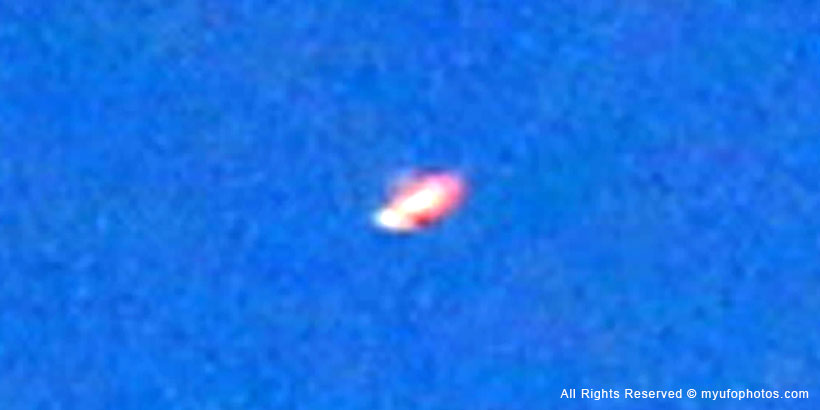 This event with a flying saucer above was really strange. I was there to photograph strange things and then this orange glowing object appeared above me, I immediately assumed it to be a plane. I took some “archive” photos of the object without zooming in, unfortunately. Then the object made a turn no airliner can do in flight, I was still inattentive for some unknown reason? Maybe I was under thought control of some sort? But I got the pictures! Read more here

Show me a picture of a UFO (shape shifting object)

On April 12, 2010, I was hanging out my window taking photos of some contrails and there was something flying in the camera direction. I assumed it to be a small Cessna type airplane. Later I found it in my pictures, magnified it and saw a shape-shifting UFO that behaved very strange over 5 pictures. On each picture, the object has e new shape? It consists of a white fuzzy “body” surrounded by two dark objects that seem to move around the white body in the middle. 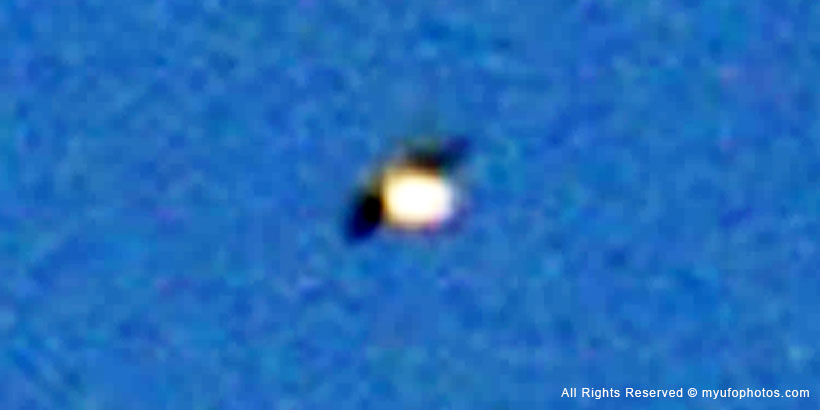 I am not always seeing them when I take the photos. This time I saw it live but assumed it to be a plane. It is out in the distance and I could not see it clearly from my position. But I saw some light-shadow relations on the object while it flew in the distance. This is one of the strange ones in my collection that is difficult to describe. Its shape is undefined. Read more here

The next one is amazing. I did not see the UAP while taking the 173 photos in relation to a live sighting the day before. Then I came home and looked through the pictures I found these two unidentified flying objects in the sky. There is a sphere UFO with a black band across followed by a strange vertical companion. I suspect the black band on this sphere to be darkened windows protecting the crew against sunlight in space. The vertical structure looks more like some kind of machinery. 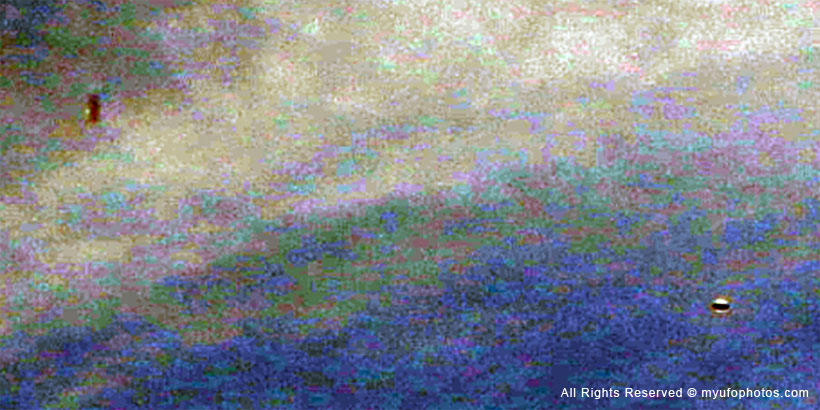 They were not alone in the sky and several other UAP objects was caught on photo that day. The creature sighting I had the day before had caused me to take 173 photos with the UAP in some of them. You can see more in the UAP photo sighting gallery here

The sky photography archive I started building in 2009 mainly consists of photos with cloud systems and aviation contrails. Some of the clouds are here and some of the contrails are here

I still take photos of the sky, DSLR photography, when the weather becomes interesting. I use my Sony A-100 reflex camera with a standard 18-75mm zoom lens for the weather photos. If I see something strange up in the sky I use my Canon EOS 60D with 300mm zoom lens to investigate. As a precaution, I shoot a series of pictures even if I do not see anything.

All my UFO photos originate from this work. The show me a picture of a ufo article here is solely based on that.