Homer Simpson UFO face with eyes ejected was an unidentified aerial phenomenon (UAP) flying above Denmark on August 19, 2012. It was captured on photo from my flat in Odense city in the evening around ‏‎20:23 pm. This thing is not easy to find in the photo since it is hiding partly in the mist of an aviation contrail in the distance. After magnification and some image processing, an actual but unknown flying vessel appears. And somehow this UAP looks like Homer Simpson´s face with eyes popping out. 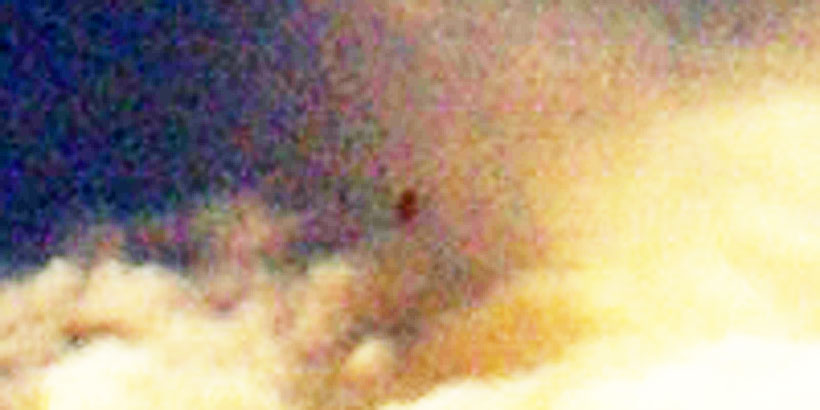 We can always discuss if this looks like Homer Simpson´s face or something else. When I saw this object I immediately associated it with the face of the crazy father in the cartoon series The Simpsons. That is the reason behind the choice of heading. But this is not a cartoon character or something fictional but a real unidentified flying object. The picture below is unedited. 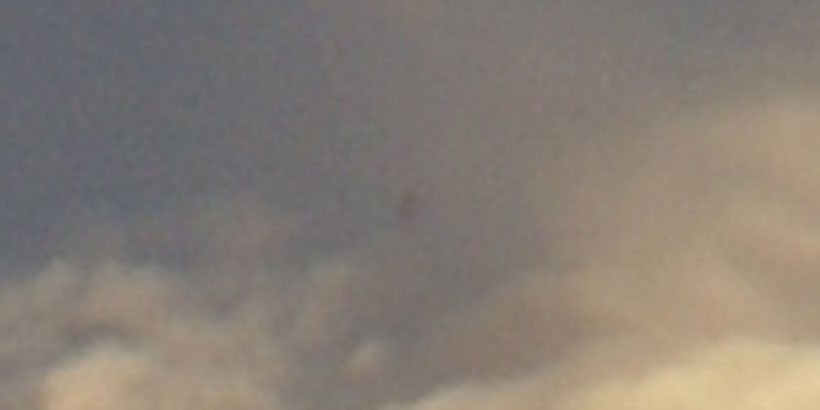 The vessel seems to stand still in the sky with no indications of movement. It has a slight slope to the right. The contrail cloud where it resides may indicate this thing is at a high altitude around 27-40.000 feet. Since the vessel is far away from the camera near the horizon, it must be around 15 km away. It is a very large unidentified flying object much larger than an airliner.

When I magnify the object in the image (below) a few times more, a very odd object appears. I find it difficult to define this flying thing. It’s like a flying Homer Simpson with eyes ejected. I can´t relate this thing to any known and real vessel. Can you? 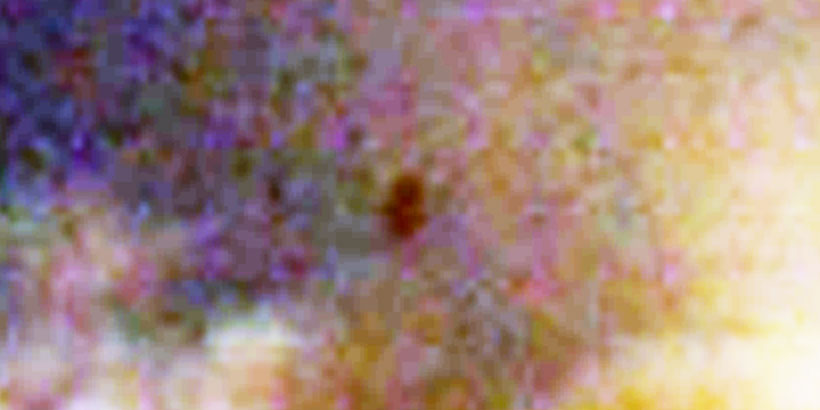 The picture above is the closest we can get before it gets too blurred in the pixels. It has been processed in Adobe Photoshop with Auto Contrast. The direction of this craft is unknown and I did not see it while taking photos of the aviation contrail.

A logical explanation could be that the Homer Simpson UFO was a weather balloon? The vessel has to be high up since it seems to hover close to, or above an aviation contrail. Commercial air traffic leaves contrails at 27.000 to 40.000 feet. If an object is at that altitude, it would risk colliding with an airplane. A weather balloon here would be very odd because it is an area with a high frequency of air traffic. Who would authorize the launch of a weather balloon in an area with a lot of airliners cruising by? Homer Simpson?

UAP much larger than commercial aircraft

Furthermore, the UAP also has a certain size since it is located far away in the image and high up. And if the object is really at an altitude of about 27-40.000 feet, I would say it’s something much larger than a commercial aircraft. An airliner would probably only be a very small dot in the image at that distance, or maybe not visible at all.

A UAP in this area, an air corridor for commercial air traffic, should have alerted some radar stations in the area. If F16 aircraft was scrambled I do not know. But the Homer Simpson UFO was also gone shortly after the first photo was taken.

In the subsequent photo taken 10 seconds later, this UAP is not found anywhere in the image. It could possibly hide behind a cloud or the remains of the contrail seen in the middle of the image. Or the Homer Simpson face may have zoomed away and left the area.!?