Algeria UFO files are hard to find. Searching on Google specifically after .dz domains about UFO´s in Algerian airspace does not reveal anything that comes near disclosure documents. But other sources like CIA, NSA, and Wikileaks have documents that refer to unidentified flying objects or strange flying machines over Algeria. 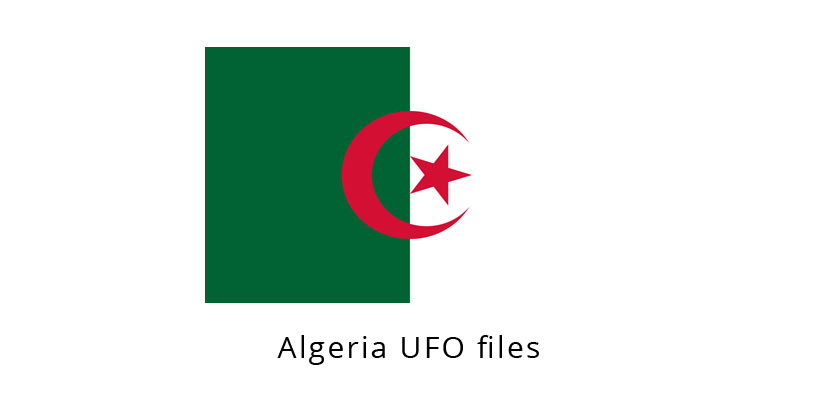 CIA documents about UFO´s in Algeria

First document from Central Intelligence Agency (CIA) outlines the sightings that happened in Algerian airspace starting on July 11th 1952 above Lamoriciere, where the witness Thomas Martinez saw a sudden illumination above. He thought it was a falling star and then describes it as a meteor followed by two other objects. They were all trailing with a yellow cloud of smoke. Shortly after the three meteor-like objects disappeared, an elongated oval ball of fire appeared out of nowhere. It was flying at low altitude clearly visible while rapidly following a rectilinear course. Could this be the description of a ghost rocket ??

The CIA document further describes that UFO sightings with strange machines continued throughout Algeria until July 31th 1952. The last sighting described in the document tells about a couple from Oran who witnessed a spindle-shaped object with tapered ends 1000 meters up. It differed from ordinary aircraft since it showed no exhaust smoke, made no noise and had great speed. This event unfolded on July 31th 1952 (source 1).

NSA documents about UFO´s in Algeria

A search on “Algerian ufo” on the NSA website gave three results, two available and one unavailable. The two available documents link to the same document that is actually an article titled “Is the CIA Stonewalling?”. It is written by Richard Hall, director of NICAP, the leading UFO organization during the 1950s and 1960s. The article describes how CIA, even though they claimed the opposite, continued with periodic studies and reviews of UFO incidents both foreign and domestic.

The article refers mainly to an 892 pages report of UFO-related documents released to a lawyer with the name Peter Gersten. The report describes several observations with unidentified flying objects or unidentified aerial phenomena around the world. A State Department message on March 7th, 1975 from the American Embassy in Algiers tells about strange machines seen near Algerian military installations. Some of the sightings were confirmed by radar (source 3).

Wikileaks documents about UFO´s in Algeria

The Wikileaks cable, a telegram type of message from the American embassy in Algiers, Algeria, with a call to Secretary of State Henry Kissinger to shed some light on the strange “machines” seen maneuvering over Algeria. The telegram reveals a strange story about three American journalists coming to Bechar to cover the arrival of Malcom Forbes hot air balloon.

But the balloon flight was canceled. Instead, the arrival of the journalists became related to strange events with unidentified flying objects (UFOs). Unknown objects were seen five times, twice near Oran, once in the center of the country and then near Bechar. The last sighting happened off the coast on March 6th, 1975.

Objects had a very bright light, like if you look into the headlights of a car which obscures its shape. The object was seen maneuvering, land and take off again. They were seen on radar and by multiple witnesses (source 4).

The last document from Wikileaks describes two objects greenish in color seen March 1975. They became luminous before rising. Some think this was just the planets Jupiter and Venus (source 5).

A search on “ufos algeria” and “unidentified flying objects algeria” in Google gives no good results. Actually, I found no information at all about sightings in Algeria with a .dz domain, which is the internet domain extension for Algeria. One website, unfortunately not Algerian, thinkaboutitdocs.com, goes through some of the major sightings in Algeria dating from 1914 to 1998.

If you have knowledge of additional resources to the Algeria UFO files not been addressed in my article, please drop a comment.