Flying saucer appears above old UFO landing site is a continuation of UFO sighting, landing and alien contact. It is about my visit to the related and supposed 1981 landing area. It was there I saw a strange craft go down in 1981. In 2013, 32 years later, I finally made a visit to the area. While I was there, a flying saucer appears and almost confirms the authenticity of the old landing site. 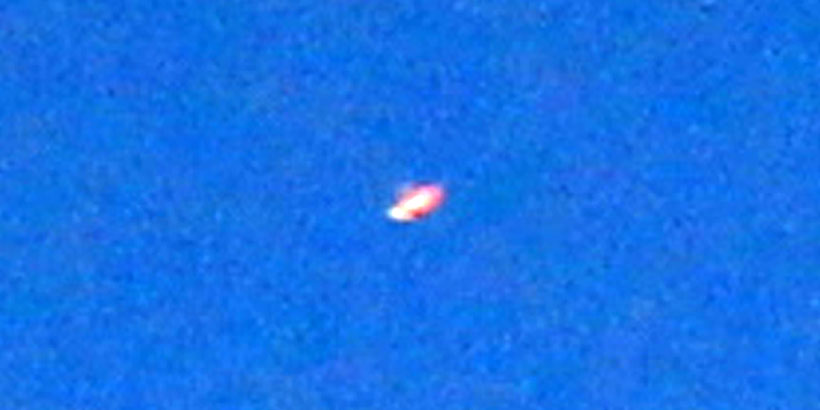 The UFO picture above was taken in Denmark in Odense city on August 9, 2013. It has been processed with Auto Tone and manual Brightness in Adobe Photoshop. It shows the flying disc that visited the site while I was there.

So, I’ve been to the old supposed UFO landing site where a “sparkling light” probably landed back in 1981. It is an area designated from where it would be possible (and still is) to go down and land partially unnoticed.

I found the area using Google Earth. When I draw a straight line from the 1981 observation point through the landscape to where I saw the craft go down, the line passes the area you see below.

It is a flat cornfield hidden behind trees and some industry. The farmer’s old house is still inhabited, but based on the cadastral map, it’s a commercial property. All buildings with a view to the cornfield are commercial or state property. At the time of the supposed landing, this cornfield was in production. To the left and to the right there´s an opaque line of trees.

32 years after a sparkling light landed in the area, I finally made a visit to the UFO landing site. It was in the evening on August 9, 2013. I had my Canon EOS 60D DSLR camera with me and took a series of pictures of the area and the sky.

I walked into this old cornfield that has been left behind for years. It apparently grows itself and the grain still standing. I reached the corner of the treeline from where the above photo was taken. At 8.39 pm I notice a glowing orange-red object high up in the blue sky. I assumed it to be a commercial plane reflecting the light from the descending Sun and ignores it. But I take some pictures of the sky and the “aircraft” is on nine of the images.

Prepared for a little strangeness

I admit I had a little hope, that the place was the actual landing site. And when it comes to a landing area where alien spaceships lands (!), one should think that strange things could happen.!? At least I was prepared for a little strangeness and had planned to photograph everything that seemed odd.

That´s why I think its a bit weird that I am not more aware of this orange-red object. Why did I not take some pictures of this thing alone, zooming in and try to get a good picture? For some reason, I did not? There I stood passively with all my camera equipment and with a potential spaceship over my head. The strangeness I had hoped for actually happened in its own strange way…

Was I subjected to thought manipulation? I do not know? But it seems that something unexpected happened since I did not do what I had planned to do! I even remember the object made a sudden turn and I know a commercial airliner won´t make such maneuvres in normal flight. So why did I not respond to this strangeness?

Airplane turns out to be a flying saucer

Since the UFO landing site was heavily plagued by mosquitoes, I did not stay out there for so long. I packed my camera equipment and drove home. When I got home, I transferred the images to my computer and thought no more about what had happened?

So in the summer of 2017, 4 years later, I dug the case up again. And to my big surprise, I discovered, that what I thought was a commercial plane, actually was a flying saucer.

I got nine images with the saucer-shaped disc. Some were out of focus, some showed the disc pretty clear. As I wrote earlier, I noticed at one point the disc made a turn. I made the animation above with the UFO while it’s turning based on three of the original photos. It was this particular detail that gave me a hint that something was not as it should be…

Please notice, that the time indicator on the first two slides in the animation above is correctly read. Why my camera shows the same time for two different images I don´t know. It does that sometimes when photos are taken at very short intervals.

As you can see in the picture below, its a disc-shaped object with an elevation in the middle. My observation from 2012 with a black flying saucer also showed a disc with an elevation. But this time it is a flying saucer with details. The elevation reveals two round dark areas that look like side scuttles or port holes. Beneath the disc, there is an orange-red glowing area. 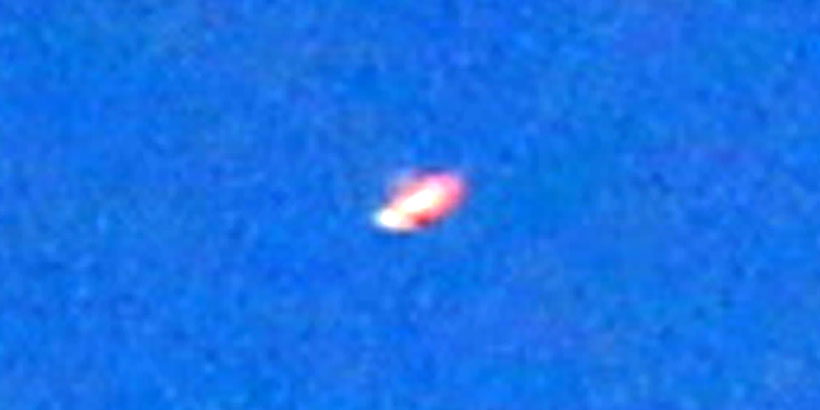 And what I thought was a reflection of sunlight turns out to be a discharge of light at the bottom of this disc. There are no visible earthly characteristics, neither type of declaration or navigational lights. It is not a commercial plane, not a military aircraft, not a cigar-shaped UFO or a sphere. We are looking at a disc-shaped object with an elevation on top, a classic flying saucer!

The first picture above from left is a calculation (Color Burn / Exclusion on both channels). The second is a color negative, the third a grayscale and the last is a negative.

As you might have noticed, there´s a dark spot on the edge of the disc at the very bottom. In the negative above you see it as a white spot. I wonder if this could be a secondary object, a probe maybe? The 2012 UFO sighting I had with a black flying saucer, also had a secondary probe flying around it. Could this be the same saucer as I saw back in 2012?

I have chosen to keep the landing site secret. Something could indicate that it is still being used and I do not want to be the one who destroys it. I will keep it secret in respect for our alien brothers and sisters…

These are the sky photos with the flying saucer above me…