The UFO cloud creator photo that seems to indicate controlled condensation by a mysterious object, was captured in Denmark on May 25, 2017 above Odense city at 03.06 pm local time. It shows what looks like a controlled condensation by a partially hidden object. If it were not for the strange object behind the short elongated white cloud clearly visible in the photo, it would have been categorized as just a cloud. But the mysterious object behind, the UFO, seem to be the source of this cloud manifestation. 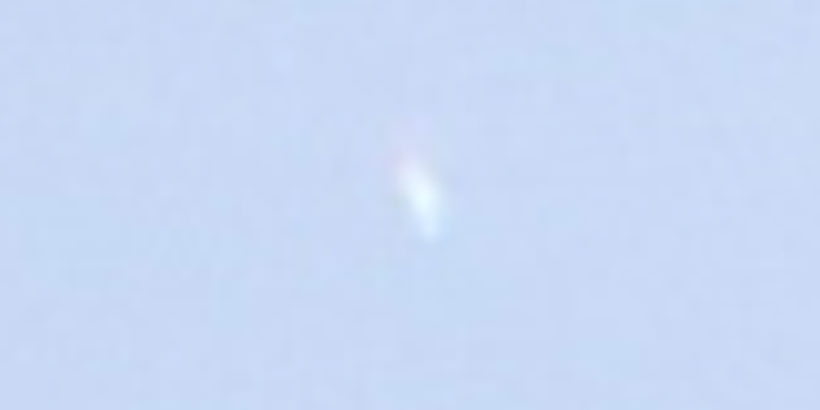 In the unedited original photo above, there is no clear sign of a mysterious object behind the little cloud in the sky. Besides the weird shape of the cloud it could be just a normal cloud manifestation or so-called condensation where invisible water vapor in the air transforms into water droplets in the form of for example low altitude Cumulus clouds.

But the supposed UFO cloud creator appears when we put the photo into Adobe Photoshop and use the Auto Tone filter. This Auto Tone feature in Photoshop is great when you want to dig a nearly invisible object out of the mist. It re-draws the entire picture and make even very small differences in the pixel colors more clear see below. 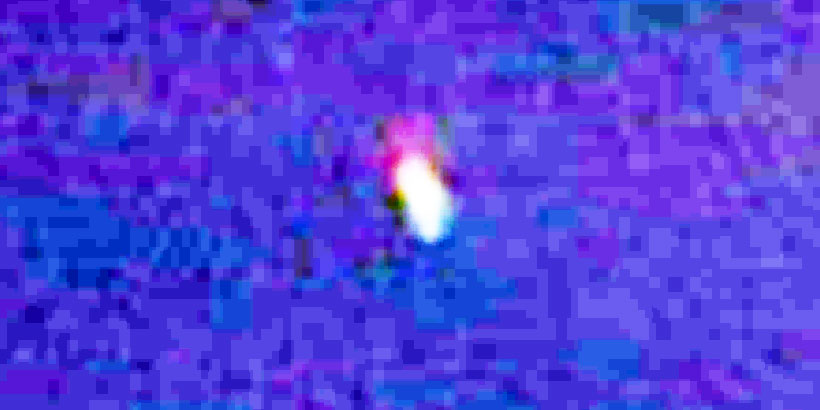 Due to the Auto Tone filter, you cannot expect the colors to be displayed correctly. The pink area behind the cloud manifestation, the UFO cloud creator, is in reality colored differently and is perhaps greyish with a faint reddish tinge instead.

And the photo is, unfortunately, close to be rendered too blurred because of the large grainy pixels. So the actual shape of the UFO is not possible to discern furthermore. Perhaps we only see a part of the mysterious object behind and the rest of it could lay hidden. But even with a photo in bad quality, you have what you need – the sky as background, a cloud manifestation and a UFO.

Is the mysterious object capable of performing controlled condensation? The Auto Tone filter caught something and it is different in relation to the cloud manifestation and the sky background. A mysterious object is there and it seem to be rectangular in shape with something protruding both left and right. And the cloud manifestation is somehow attached to that object, or it simply comes out of a hole in the object. The photo speaks nicely for it self, hence the name UFO cloud creator.

The picture seem to indicate intelligent controlled condensation, but what is the purpose? Is it to be able to hide their vessel in the sky so it does not attract attention? I do not think they do it for fun, on the contrary, it must be because they need it somehow.

There is probably a protocol they follow which says they must not affect life on earth directly. And that’s why they use controlled condensation to hide in the sky. And precisely this protocol is probably also to blame for them never landing and physically making contact to us. But still, just that they are seen in the sky and caught on photography has a profound impact on us.

Other examples of UFOs and cloud creation

Based on other examples with UFOs in relation to cloud creation (condensation), you can check out the triangle formation where one of the objects seems to produce some sort of condensation. And I have fly-by footage that shows an unknown flying vessel passing by my camcorder while it produces something that looks like a vapor trail. Explore the “Condensation”-TAG to see the other unidentified flying objects related to the supposed controlled condensation and possible cloud creation.

The UFO cloud creator photo above originates from a photo investigation inside a secluded pasture where I had a creature sighting on May 24. And because of that UFO sighting, I decided to visit the site again on May 25. I had my Canon EOS 60D DSLR camera with me and it produced 173 images and this UFO gallery with 43 hi-res UFO photos.