Alien mothership with flying saucers and UFO scout fleet was coincidentally captured on photo while shooting a sudden cloud manifestation. The sudden cloud appearance happened in Denmark above Odense city on May 23, 2012, 01.18 pm local time.

I saw no objects during the photography but later I discovered a large elongated cloudy UFO in two of four hi-res photos. And this vessel seems to act as a mothership with something that looks like flying saucers attached outside. And there is a large fleet of smaller objects partly hiding in the sunshine in one of the photos. That´s the so-called UFO scout fleet. 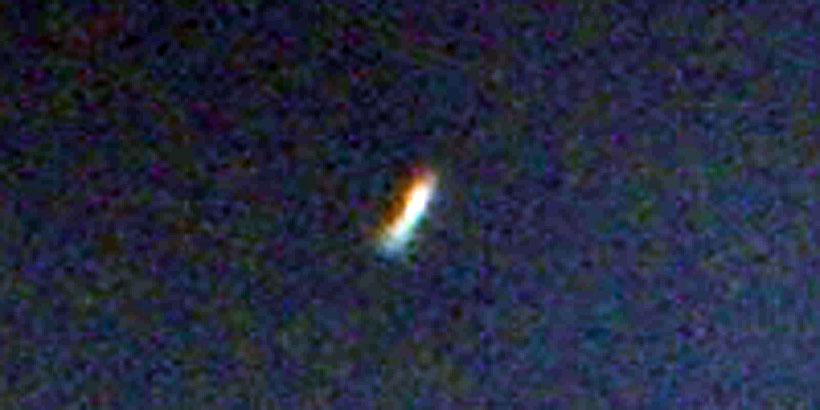 I went to my friend’s colony garden again to help her with the weeds. The weather was beautiful and the Sun shone from an almost cloudless sky. As always, I had my camera ready to shoot pictures if a cool cloud appeared or something strange should occur. The colony garden is, by the way, the same place where I had a sighting with a black flying saucer

Sudden manifestation of a beautiful cloud

Afternoon at 1.18 pm we sat down and enjoyed the weather. Right above us, I see a sudden manifestation of a beautiful cloud I did not notice a few minutes before. I hurry to photograph, four snaps of the cloud, four more photos for the meteorology archive. 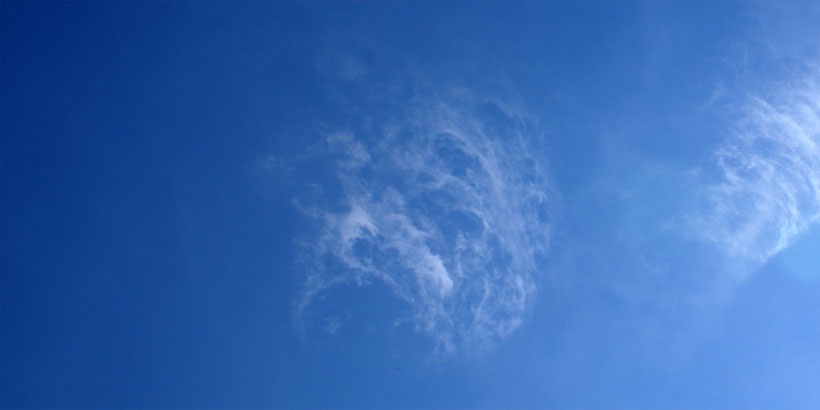 And then we sat there and looked up at the sky observing those artistic clouds. Although we both sat and looked up, none of us noticed the alien mothership and the UFO activity high above us. Which, however, occurred partly in the sunshine.

There is clearly a large elongated UFO in two of the photos. In the first photo DSC06440 top center (Object A), it hovers alone with the deep blue sky as background. There is no UFO scout fleet to be seen just aside from two white dots far right in the sunshine. And there is one dark spherical object under the artistic cloud you see in the above photo.

In the second photo DSC06443 bottom right (Object B), it has moved a fair distance across the sky and now seem to be functioning as mothership. It is surrounded by a large number of smaller objects (scout fleet) partially hiding in the sunshine.

When I enlarge the alien mothership in the first photo DSC06440, I see a vessel that could resemble a huge airship (or alien mothership). At the bottom of the vessel, there seem to be three round discs with a darker tone. To me, it looks like classic flying saucers (discs) that stands obliquely onto the large object, just as the dishes are set in the dishwasher.

The flying saucers as they hereby are baptized appears with a dark gray disc and a lighter elevation in the middle. Two of them are relatively clear. The last one on top of the object seems more unclear, is smaller and located offset from the other two. 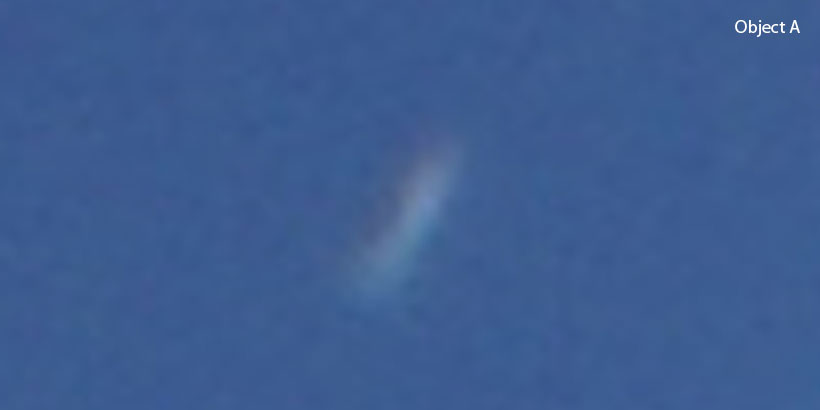 The picture above is unedited and shows the mothership as it is seen in the original photo. The picture below is the same but has been processed with Auto Tone in Adobe Photoshop. In both images, sunlight shines from the right below middle. 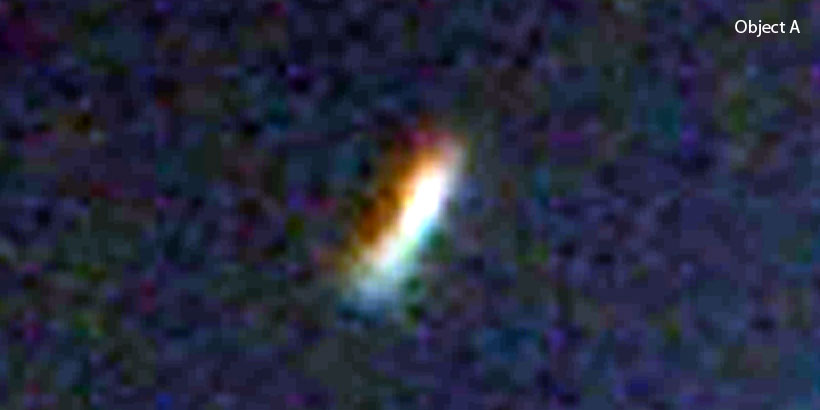 What are these “flying saucers” doing up there at the bottom of this vessel? Are they in transit to or from their mothership or are they docked? Or did the saucers create a cloud to hide in? It is difficult to determine from the picture what is going on. What I see may not be what it really is? But if I really see what I think I see, this must be a real alien mothership with disc-shaped objects aka flying saucers docked. Simply a fantastic photo on the same level as the sphere with a vertical companion-photo if you ask me.

The alien mothership´s (as they hereby are baptized) in the first photo (object A) and the second photo (object B) has the same profile. Both look like a big airship with visible details in the form of elevations on the hull. And that is the reason why I assume it must be the same vessel in both photos, just seen from different perspectives.

Alien mothership (B) with elevations on the hull

The alien mothership (object B) in the second photo (DSC06443) also comes with some strange details at the bottom. When I magnify the image I see a vessel that most of all resemble a large airship. It is much brighter compared to object A since the “aliens” have now moved into the sunshine in relation to the camera position.

The cropped picture below shows object B as it appears in the original image without image processing. 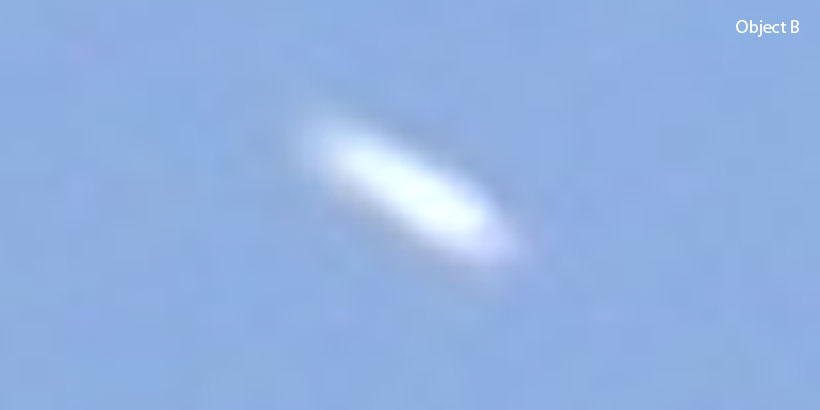 The picture above and below shows the same vessel. We’re looking straight up at the bottom of the vessel. Sunlight comes down from top right. Above you can sense some extensions that are located on the outside of the ship. These are also visible in the picture below where you can see shadows on the hull. 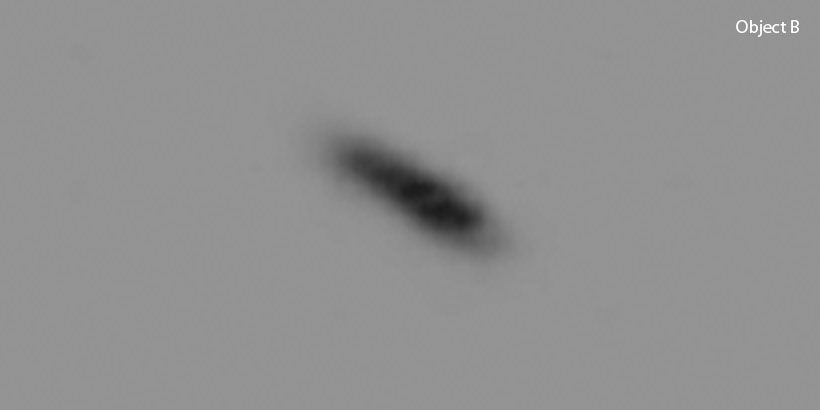 The image above has been processed in Adobe Photoshop with Calculations (red channel merged/gray channel exclusion). This was the only image processing method that most clearly shows the elevations on the hull. The light/shadow relation can be misleading but it is indicating that something is sitting outside on the hull on this supposed alien mothership.

Object A seems to hover alone in the sky while object B seems to share the sky with a large fleet of small cloud-white objects. If some of these small objects are actually a UFO scout fleet originating from the alien mothership is unanswered… 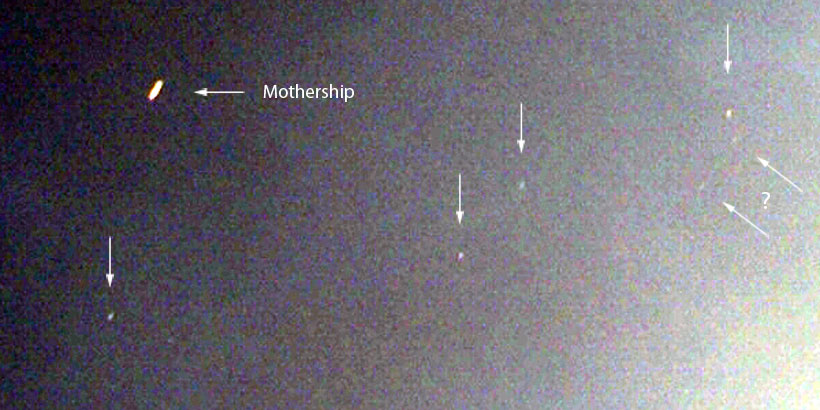 The cropped picture above has been processed with Auto Tone in Adobe Photoshop and originates from DSC06443. It shows the alien mothership together with some smaller objects. The flying saucers are not visible here.

One object seems to blast a short distance in the sky, which leads my thoughts to something not out of this world. You find it on the right side of the picture with the two slanted arrows and a question mark.

Keep in mind we are in late May and the Sun is shining from an almost cloudless sky. So there must be pollen in the air. Some objects seen in DSC06443 in the sunshine may be pollen. But the objects nice outlined with indications of shadows may not be pollen but larger objects. See some of the UFO scout fleet in the list below…

Many more objects in the image are not included here. The blurred and smeared ones that can be pollen have been omitted. If some of these many objects are part of a larger fleet I cannot decide. I’ve been looking for those who seem to have enough pixel mass and light/shadow relations to be a physical object.

Looking beyond the strange elevations or extensions, and skipping by the “cigar-shaped UFO” terminology, the alien mothership could actually look like a large airship at a distance. But this “airship” seem to be very high up, higher than airships would normally come. And this thing moves at a relatively high speed.

The Hindenburg airship was one of the fastest airships ever built. It reached about 136 km / h and did not fly over 650 feet. Goodyear’s typical airships today manage to fly about 125 km / h and about 1500 feet high. However, they can go up to 7000 feet altitude (about 2 km).

There are High-altitude platform station (HAPS), but they are not built for high speed sky cruising. HAPS can both be airships and balloons and are build for operations such like telecommunication, surveillance, weather, and environmental monitoring.

UFO disappears in less than 8 seconds…

However, there is a problem with the airship theory. In the first photo DSC06440 at 01:18:10 you see the ship at the top middle. The next photo DSC06441 I take at 13:18:18 only 8 seconds later, is turned approx. 45 degrees counterclockwise. It still shows the area where the object was in the first picture but the object is gone…

Besides a small black dot in the center out to the left In the next and third image DSC06442, there are no big objects to see here. First, in photo DSC06443 it all goes crazy with alien mothership and a large scout fleet.

24 seconds from point A to B

The fact that the alien mothership is visible in the first photo and gone in the next 8 seconds later is quite a mystery. But this vessel also seem to move over a greater distance from point A in photo DSC06440 to point B in photo DSC06443. And it travels this distance in only 24 seconds. 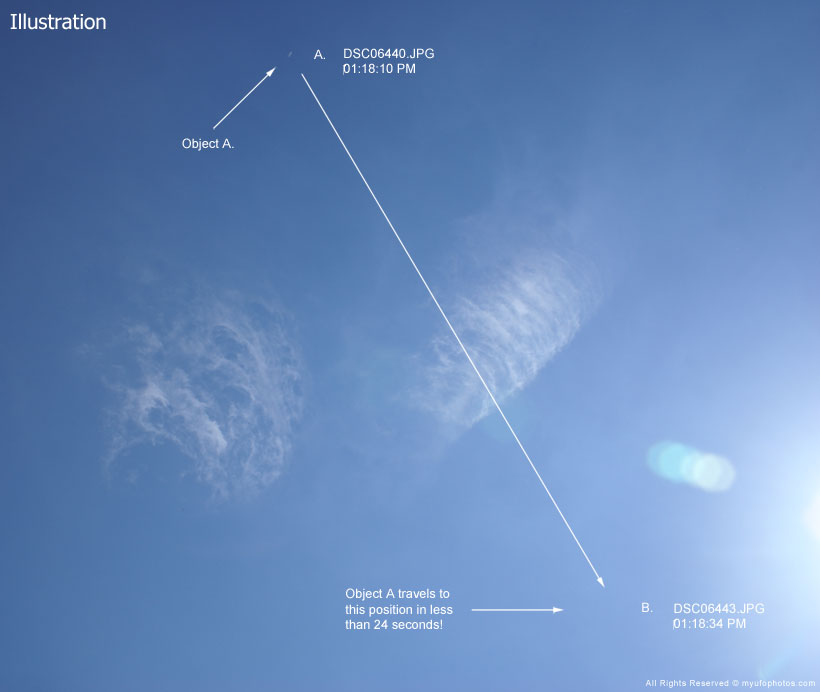 In 24 seconds, an airplane could very well get this far. But if its an airship I start to doubt. Now for good reasons, I do not know the height or exact position of the alien mothership in the two photos. Therefore I can not calculate the distance from points A to B. I am no aviation expert, nor expert photographer, so I will leave it up to the right experts to assess how far there is!

However, I think it is interesting that this UFO probably moves over this distance. And afterward, in the last photo, the alien mothership divides the sky with a fleet of smaller objects, which I hypothetically believe must be the associated UFO scout fleet.

The alien mothership in this article seems to have been photographed again. In another photo sighting from 2017 that produced this UFO gallery, a similar UFO is posing in some of the photos. Read the article UFO mothership with flying saucers docked?