UFO sighting, landing, and alien contact refer to a landing of an unknown craft and first contact with an extraterrestrial paranormal being. It happened in Denmark in my hometown Odense in 1981 under a clear evening sky. 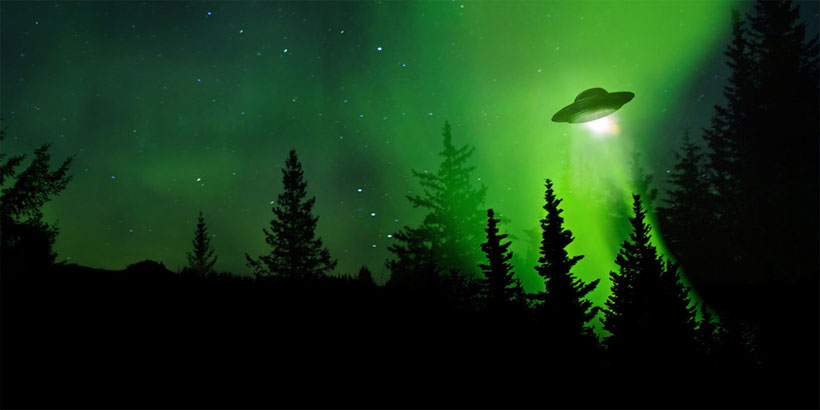 I was 12 years old. I do not remember the actual date for the UFO sighting. But it was late summertime 1981 around 8.00-8.30 pm. I was together outside with 4-5 other kids including my neighbor, which also was my classmate and at the same age as me. Darkness had just fallen, the sky was cloudless and we could see the stars clearly.

My eyes were often directed towards the sky and that evening was no exception. And I see this star move across the sky high up and points to the sky, wow see up there! And we all observed a bright sparkling light. At first glance, it seemed to move across the sky. But we soon realized that it descended slowly but steady in a slightly curved path.

We were all aware of this mysterious object at last because we could see it was coming down. We all looked at it for some minutes while it descended until it disappeared behind some trees 1,5 kilometer away. Our UFO sighting turned into a UFO landing.

And then nothing happened. While we were waiting for it to come back up, it became late. The other kids began walking home one by one. Except me and my neighbor, we were still waiting on the spot, because we really expected it to come up again.

After half an hour we gave up and agreed to go home. Our parents had said we should be home at that time, so we began walking home. But after only a few meters, we looked at each other, turned around, and sprinted back to the spot from where we could see the trees where the object came down.

Exactly as we both were back on that spot and had our eyes directed towards the landing site, we saw a thin streak of light from behind the trees and out in space. Well, it looked that way. It was there and gone under a microsecond. Like a camera flash. And we both screamed “oorrrhhhhh” to each other after seeing that cool spaceship techno performance.

We both agreed that we just had had a real-world UFO sighting. All this happened only 50 meters from where I will have a second UFO sighting 6 years later with a low-flying Boeing 747 and three UFOs (1987).

I clearly remember the sparkling light as the same type of light you see coming from arc welding. Some kind of electrical process that produces the same light like a star. I did not see the craft, just the light, so I have no idea how big it was or what shape it had. I could not see if it was a sphere, a cigar-shaped object, a flying saucer or other shape. We didn´t hear any sound from the object under the UFO sighting. No sound when it came down and no sound then it streaked out in space.

I remember when we ran back to the spot, I arrived first and had my eyes on target where the object landed. I then see out of the corner of my eye my neighbors head and torso appear almost horizontal behind me to the left. While I see him come into sight, he turns his head and the moment he has his eyes pointed towards the landing site, we then see this thin streak of light.

The streak of light was in a vertical line from where the object landed and up into space. I am asking my self, how it can be, that we both suddenly get the same impulse at the exact same time – that we must return to watch again. And exactly as we are back on the spot, we have a UFO sighting. Did this UFO sighting make us telepathic? I think that was strange…

Our UFO sighting that evolved into a landing also became an alien visit. It was face-to-face alien contact with an extraterrestrial entity, which somehow established contact with me outside the realm of time.

After the sighting and streak of light, I and my neighbor went home and nothing more happened that evening. Then one or two days after I suddenly realize, that I have had an encounter with an alien being down at that same spot where we had our UFO sighting.

This awareness could easily have been caused by a dream I dreamed, but this was different. My awareness of being part of an event came out of nowhere. It was not a dream I remembered when I got out of bed. This sudden awareness came to me around noon then I had been awake for hours.

It was not possible for me to point out what day or what time I should have had this alien contact? But the event was in my memory now, like if it really has happened. I ended up with the conclusion, that it may have happened out of our realm of time. This event did not take a second of my time in the real world since I could not point out where in time it happened.

But the alien contact happened and it goes as follows…

I stand halfway up in our driveway and see a red light at the end of the street where we had our UFO sighting. After seeing this red light, it is as if I set in motion and heading for the red light (I do not remember walking). Then I approach, I see this red light is some kind of spotlight on something that looks like a tripod. And I see someone standing next to the spotlight. 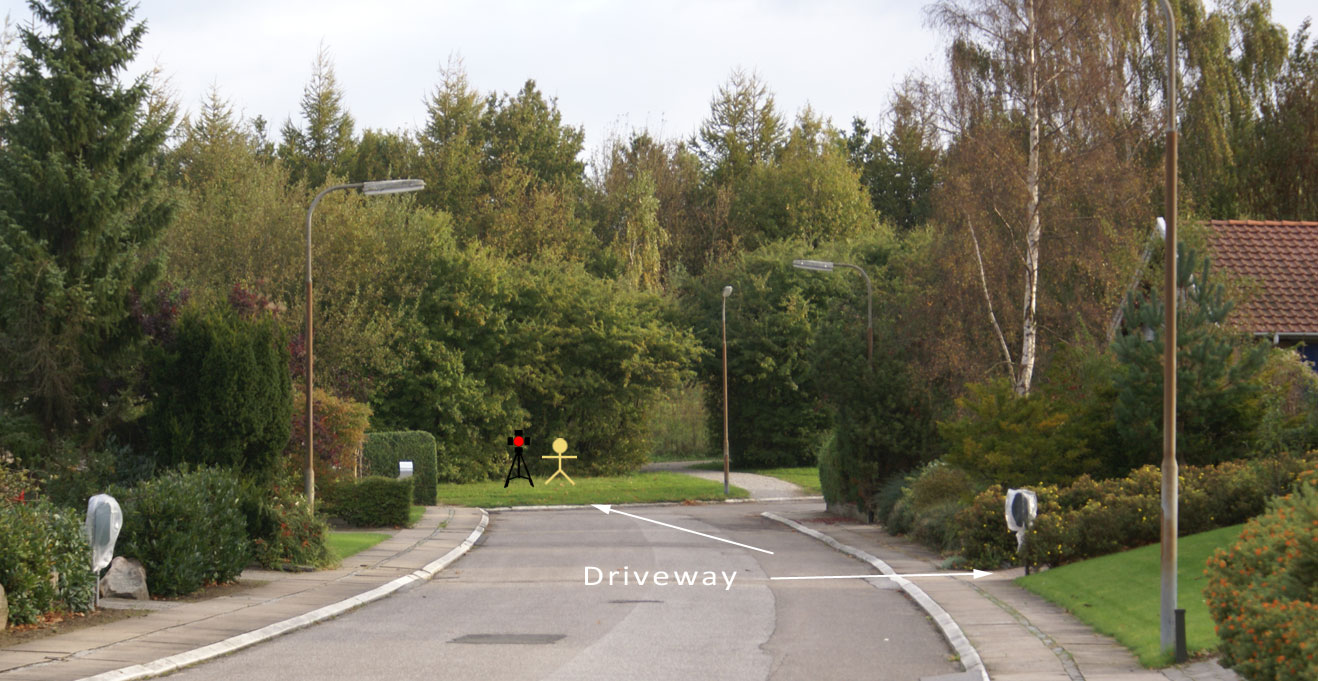 While all this happens, I have no fear at all but is almost in a kind of relaxed state. As I reach the red light, I can see the person next to the red spotlight clearly, and he looks like the reunion is pleasing. Then I don´t remember more and from this point, nothing more happens. My “vision” ends with his smile.

The alien I was facing is not just a random person, but the highest ranking of that spaceship we saw land. He is approximately 1,2-1,4 meter tall, his hair is shortcut like a marine and he is wearing a uniform that looks like an admiral with fringes on the shoulders.

He is slim and his face looks flat on the front and is a bit rectangular from forehead to chin. He had visible eyes, ears, nose, and mouth. His skin color seemed ordinary white with a bit of yellow.

Actually, there is not so much alien about this guy, more humanoid by look, but small and not so tall. His head, however, was slightly larger in relation to the body, compared to an ordinary human being.

Administrator of my current incarnation

I remember fragments of moments from before I was born. And I remember the alien visitor from that time on the other side. Today I know he is the administrator of my current incarnation. He could end this incarnation with a push on a button and I would fall lifeless to the ground. He is a true wizard with absolute power over life and death.

Now over 38 years and several UFO sightings and photos later, including quite a few experiences with the paranormal too, I have come to a greater understanding. Its an understanding of what is really happening, and it is NOT a story we are used to be told. What I know, do not fit well into a worldview that has been ruled by religions for millenniums, and continues to be ruled by religion.

These religions have been used intentionally to mislead people away from their true origin and true path. I do not say that the alien contact I have experienced holds the answers for all humans on this planet. We could come from everywhere in the universe, from different civilizations out there. We could have a lot of different backgrounds and origins.

We have eternal life

The level of deception on this planet tells me, that someone or something, intentionally works hard to mislead us away from our true path. And the true path is all about the recognition of where we came from before we were born into this place. The true path will only come to those who know their true origin because our origin holds the truth about eternal life…

My experiences have taught me, that I had a life before I came into this world. I know that I was present somewhere between my last death and last birth. And it was in that place where the alien who visited me, was present too.

So, in my case, when I see a flying saucer in the skies, I know it can be those guys from the other side. And I know, that the day I take the last ferry, I will go to the place where these alien crafts are coming from.

For those who want to go a little deeper – reincarnation research:

If you have a UFO sighting

If you are so lucky to have a UFO sighting, you should really take some time to think about it. What happened under the sighting and what happened afterward. Not all sightings result in alien contact. And if alien contact happens, you maybe not remember it right away. But just that you have seen the UAP (Unidentified Aerial Phenomena) could be a sign that something very special is going on.

A UFO experience can be a very big mouthful for the psyche. What you experience during a sighting can be such an extreme event for you, that you will need weeks, months or maybe years to process what you just saw.

When I’ve had a sighting, it usually takes a week or two before I have perceived and understood what happened. All the small details you see under a sighting needs to be processed by the brain before they completely render into your consciousness. It can take some time…

There are many alien contact stories out there. Some of them add that alien contact can be a dangerous thing. But what I have experienced is far from danger and evil. They are there for me, support me in my life when I have it extremely difficult.

I was contacted here back in 2011. I was at a landmark period of my life and were close to giving it all up. And they came with love and that´s my overall experience – love and caring.

But if you see a landed craft that is not terrestrial, don´t go touch it. You don´t know what technology or what field is used. It could be harmless but also harm you. Keep distance.

When I studied the area in Google Maps, I could see that there was a conservation area, an old cornfield, perfect for hiding a spacecraft. The area was in the same direction where the object landed. I made a visit to that site and some awesome thing happened. I got a visit by a flying saucer above the old UFO landing site