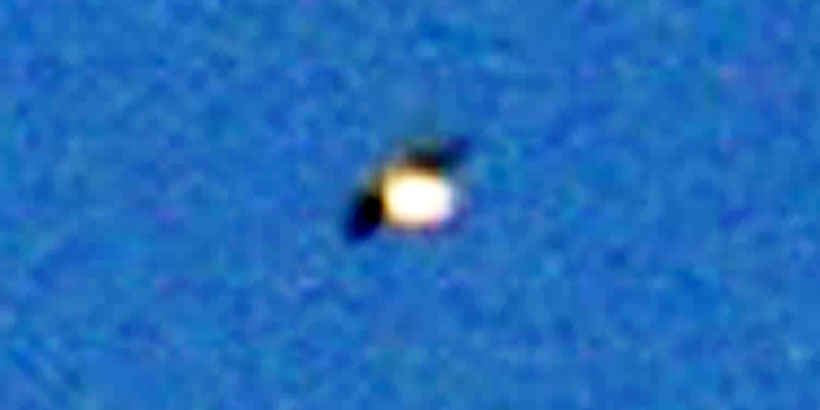 It happened out of my window early in the morning on April 12, 2010, at 6.50 am local time Odense city. I was interested in a contrail in the northern direction. The rising Sun gave a nice contrast to the contrail which caused me to take several pictures.

Object assumed to be a single-engine aircraft

Then I first discovered the shape-shifting UFO in the sky, I did of course not expect an alien vehicle or anything strange. Instead, I immediately assumed it to be a regular Cessna-type single-engine airplane. I remember how I saw it fly while taking pictures. It was moving slowly forward with a slight increase in altitude exactly as you would expect with a small aircraft seen at distance.

At one point, it looked like it turned a little bit. A reflection of sunlight and a shadow moved slowly over the fuselage. It was a calm and constant movement. It had no bird-like behavior like flapping wings. I heard no sound from the supposed airplane which I did not expect because of the distance.

Based on the visual observation, I shifted my focus away from the supposed aircraft and draw attention on the aviation contrail alone. Fortunately, the object was in the same direction as the condensation trail and was included in the photos anyway.

If this strange “alien” thing was disguised as an airplane (or bird) intentionally to fool possible witnesses I don´t know. I can not know for sure. Maybe the shape-shifting UFO here just look as it does without having any misleading intentions?

There are other cases where the UAP (unidentified aerial phenomenon) seem to resemble an aircraft. Case 71468 from MUFON seem to confirm that. A South Carolina witness recalled an alien encounter from 1972 where the object appeared to be disguised as an single-engine airplane. Read more about that here

The following photos are taken with only 2 seconds apart. As you will see, the object is shape-shifting quickly from picture to picture. It also seems to rotate around its own axis. Taken into account, that it was believed to be a small airplane, it is strange to discover this “airplane” behave as it does in the photos. See for your self below.

If you compare the first and the last image, you can see this shape-shifting UAP start with almost horizontal alignment and ends up in an almost 90 degrees turn? Weird behavior by a low-speed airplane.

The five pictures above is in grayscale and has been processed in Adobe Photoshop with Auto Contrast. It was done to sharpen up the shape-shifting UFO and make it as clear as possible in the images.

I got another shape-shifter on photo in 2012. A black flying saucer appeared with a scary transformer probe that changed rapidly. Unfortunately, I did not catch it well on video but found some stills from the video file that shows the secondary probe in action.

As you can see above, this ET vehicle has a white body centered between something I would call “black wings” or some kind of pontoons. These black wings or pontoons seem to both change shape and move around the object from picture to picture. The white body seems a bit foggy compared to the wings, that seems more clear and solid. The white body also seems to glow.

The first picture in the row above shows an object that could resemble a flying saucer. But in the next picture, the thing looks more like a bird? And it goes from a bird-like shape to an acorn-shape as seen in the two last pictures above.

The dark parts, wings, pontoons or whatever, seem to be both spread out and retracted in the pictures. And it all happens within less than 2 seconds intervals, which is the time period between each of the 5 pics above.

This thing is impossible to categorize. The shape-shifting UFO changes quickly from image to image. There is no terrestrial vessel I know that can be compared with this one. I can not draw any parallels to any type of known earthly vessel. And I have never seen any terrestrial vessels do what it does here. The below picture is a negative. 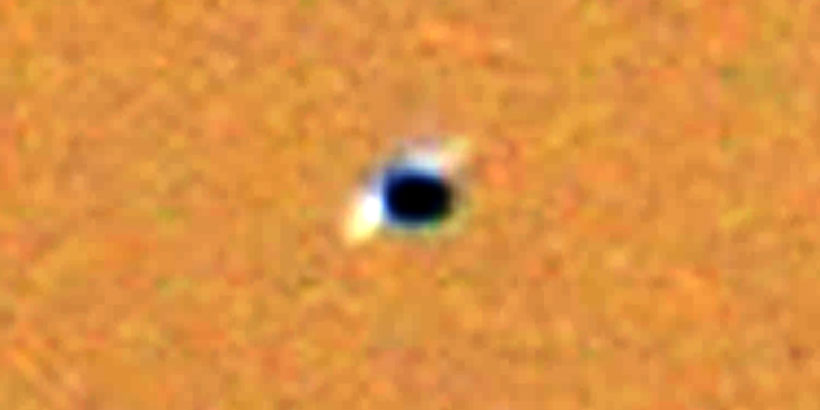 I don´t think it is a bird when the UFO is well away in the distance. And if it should be a bird, then I have probably discovered a new species of bird the size of a small car or maybe bigger. I believe this is an alien vehicle of some kind that is extraterrestrial of origin. What could it else be? I just have to pinch myself in the arm when I look at these shape-shifting UFO photos.

At some point, the ET vehicle in image DSC06935 looks a bit like the Saqqara Bird. The Saqqara Bird was found in 1898 in a tomb at Saqquara, Egypt. It is dated back to about 200 BCE. But that must be my wildest imagination. If I should name the phenomenon in my photos in this particular case, the best term would be UAP (Unidentified Aerial Phenomenon)…

The illustration below shows the 10-second sighting that is now documented with photography. I tried as hard as I could to construct the flight path as precise as possible. The illustration also shows the contrail I was photographing while the UAP was passing in front of it. The bizarre alien vehicle seemed to turn at a moment and I could see a change in the sunshine reflection on the hull. It might have happened around point 2 and 3, see below. 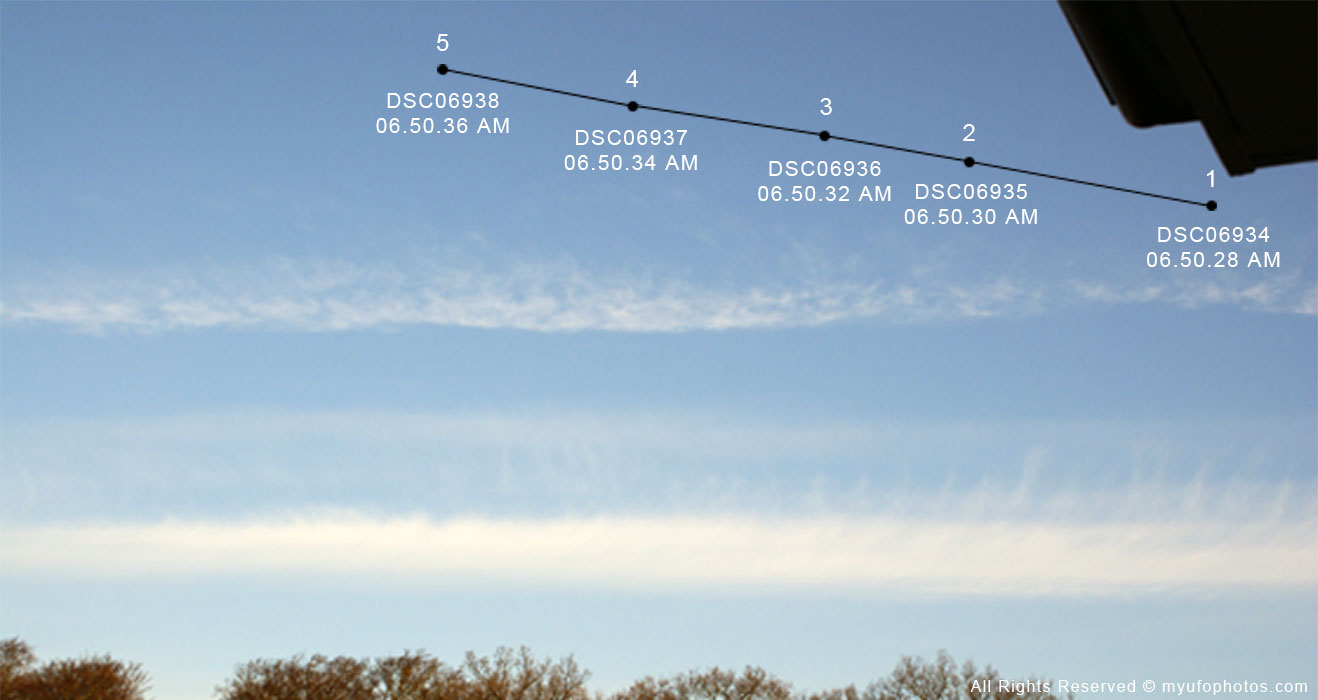 Unfortunately, it is not the first time I will miss the UAP in the sky with my camera in hand. You will find out if you read other articles on this site. I have a lot of photos of unidentified aerial phenomena. This was the first time I photographed a shape-shifting UFO.