Cigar-shaped UFO and airplane in Sun halo is one of my best UFO photos. It shows three events in one image – an aircraft and the mysterious object with the Sun halo as background. It was captured while shooting series of pictures of a Sun halo seen in Denmark on October 9, 2009 at 01.37 pm local time above Odense city. But I did not see the unidentified object during the photography. 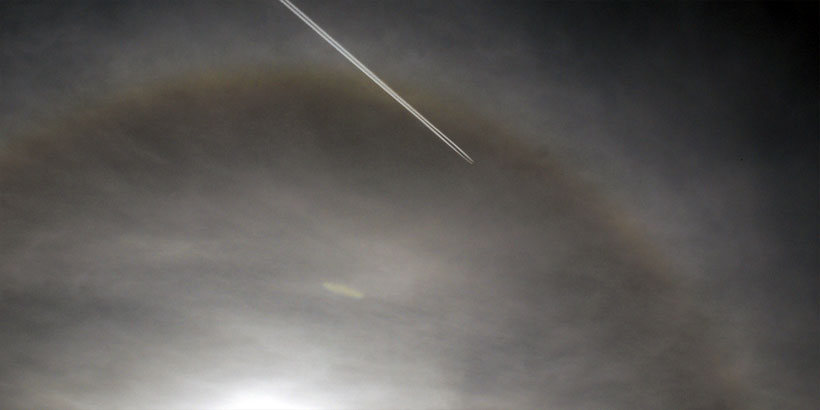 (The picture above is a cropped version of the original photo processed with Auto Tone in Adobe Photoshop to sharpen it.)

The popular term for this type of oblong unidentified flying object tends to be cigar-shaped UFO. But heavy image processing in Adobe Photoshop shows that the shape of the craft seems to be more straight-lined like a cylinder than cigar-shaped.

It has nice rounding´s in both ends and are more in the shape of a large pressure tank. But not a perfect straight-lined pressure tank since it looks like it has a little bend on top to the left. You will see that further down the article.

Massive Sun Halo in the sky

It all happened on a day the sky was covered with a thin veil of high altitude clouds, cluttered with remnants of aviation contrails from air traffic. Around 1.30 pm, I looked out my window in a westerly direction. Up to my left in a southern direction, I saw this massive halo around the Sun. The picture below shows the halo in grayscale. 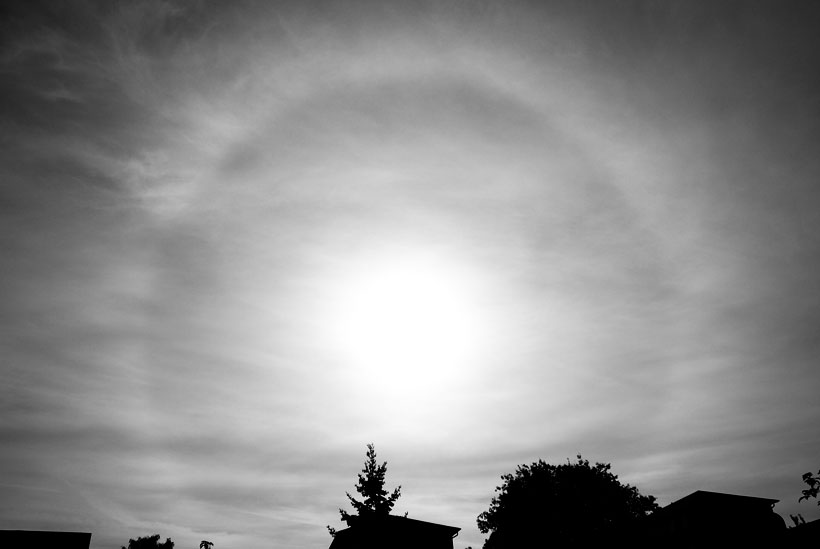 Since it was the first time I had the opportunity to shoot photos of a Sun halo with my new DSLR camera, I hurtled down to our backyard, attached the camera on a tripod and took 8 pictures with short intervals. I was quickly blinded by the Sun and my photo session was quickly settled. I did see the airplane clearly but not the unidentified elongated object.

When my eye vision was normalized again, I checked the Sun Halo photos. On one photo out of eight, a cigar-shaped visitor reveals itself together with a commercial airplane in a marvelous sight with the Sun halo as background. I saw the aircraft and zoomed in to shoot some photos of that particularly, and it was in one of those photos I got the cigar-shaped UFO. 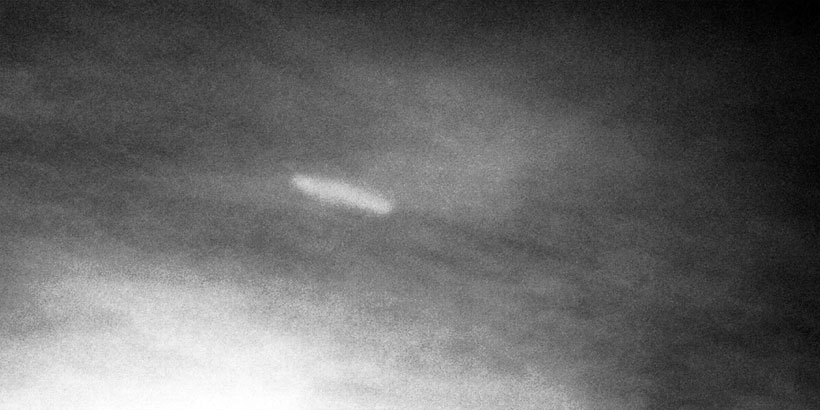 Despite the fact that it passed in front of the camera while shooting one of the photos, a faintly luminous object that easily fell in with the background, had in any case been difficult to discern visually. When you look at the Sun, you are immediately blinded. So to see this whitish craft fly-by just above the Sun, would any day be difficult to see.

Before I take a photo I always use the viewfinder to see what I am photographing. I looked through the viewfinder while shooting the pictures of the airplane but I do not remember that I saw any mysterious objects in the sky that day.

It is obvious in the photo that this is not a high altitude vessel. Instead, it seems to be relatively close to the ground way below the aircraft above. I sense that this vehicle is in the size of a large submarine but it´s only a guess.

Dark streak behind the UFO?

Have you noticed the dark streak to the right of the UFO? If this is caused by the visitor itself I do not know? I have seen those dark streaks (or shadows) in other pictures and videos. I believe those must be real and maybe engine-related. Perhaps we see an indication of a propulsion agent here that leaves a shadow behind the object? This could maybe be caused by the interaction with the air around the cigar-shaped craft, radiating a hidden force? It does not look like an ordinary contrail left by an airplane.

Unfortunately, I have no indications of flight direction since I only have one photo. I assume it flies either left or right but that is of course based on the aerodynamic principle. Difficult to imagine this craft flying away or towards the camera.

From cigar-shape to pressure tank shape?

I can easily imagine a cigar-shaped object when I see this visitor in the distance. But when you zoom in, a bit different shape than a cigar appears, more as a pressure tank shape. Cigars come in many different shapes and the vessel in my pictures does not fit any of those! 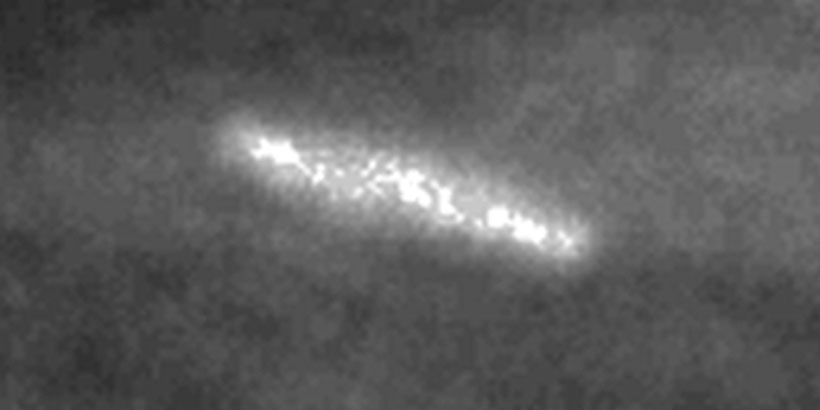 After some heavy image processing in Photoshop to clarify the object as clear as possible, I got the gray-scale result you see above.

The cigar-shaped UFO seems more to resemble a pressure tank shape but with a little indentation on top on the left side. Based on the nature and the size of this craft it could maybe have something to do with this alien mothership visiting in 2012?

See this example of a pressure tank made in steel and this drawing of a tank with spherical ends.

Own source of light or field?

The fifth photo in the series I take at 13:37:12 pm shows the passing pressure tank UFO with the upper part of the Sun halo visible. The next photo I take at ‏‎13:37:20 pm 8 seconds later shows the halo in full view, but here the unidentified flying object is nowhere to be seen. Below left, you have a preview of the original photo with the unknown visitor. Below right you have the halo in full view.

So, in less than 8 seconds, this cigar-shaped UFO manages to move completely out of my cameras field of view.

A balloon or airship would have been on most of the 8 photos. My photo session was ended after only a few minutes and I would have seen a balloon in the sky if there was one. I was blinded by the Sun, yes, but not totally blind, and was able to see both the halo and the airplane while photographing. There were absolutely no balloons in the sky that day.

A cloud cannot condensate and manifest to what we see here and disappear again in such a short time frame (16 seconds). Unbelievable things can form in the sky based on condensation (thickening) in meteorological sense, but not so fast. 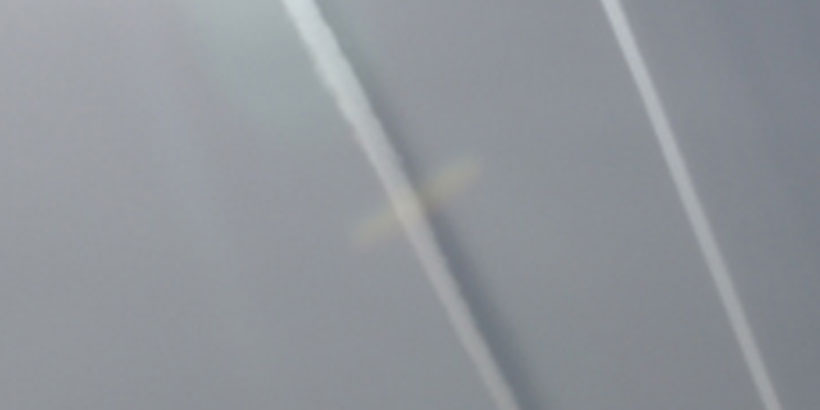 A lens flare caused by the Sun is relative transparent (if not too close to the Sun in the photo). The vessel in this article is not transparent in any way. I found a good example to compare with, in the above picture. It is a solar lens flare that actually looks a bit like the cigar-shaped UFO. This flare is transparent and you can see the contrail through it.

Based on the fact that I had the camera on a tripod pointing towards the same spot with only a minor change to the angle, it cannot be an optical reflection or lens flare. They would have been visible in all the photos probably.

And the strange higher light intensity on the object where it should be darkest is very strange. In the real world, the object should create it´s own shadow away from the Sun but there is no shadow. Instead it looks like it emits it´s own light.

If you study the object closer in DSC04333.JPG you may also discover that it looks like there is some fog or condensation around the center of the craft. You may wish to explore more about condensation in relation to UFOs.

The speed, the light/shadow relation strangeness and the surrounding fog or condensation is a triple indication pointing in the direction of an non-terrestrial explanation. The things that are going on here are so strange it cannot be technology from the human race on earth. Very advanced and unknown forces may be in play here, probably with extraterrestrial origin.

Think I first learned the terminology cigar-shaped UFO through the reading of some George Adamski books in the 80´s. Later I went on the internet searching after videos and found a film from 1967 that shows such type of elongated UFO hovering?

I also found the video from Salida in Colorado. It was a piece of footage recorded on August 27, 1995, with a so-called cigar-shaped/elongated UFO hovering high in the sky.

I was lucky again to capture a similar elongated UFO on still photography in both 2012 and 2017. Read about the alien mothership with flying saucers and scout fleet from 2012, which by the way probably re-appeared in 2017 in the UAP gallery