High altitude UFO with towers or sensor equipment was captured on photo with several other UFOs in the skies above Denmark August 20, 2017. The photo with the high altitude UFO comes with 9 other photos that show 4 different types of unidentified flying objects. Among them, there is a disc-shaped object with probes and another large unknown object with a green glow. 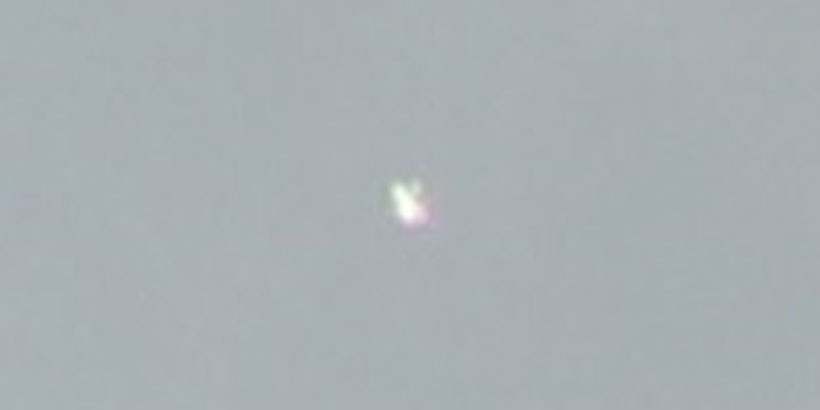 High altitude UFO above (A) in the sunshine perpetuated on photography. It was hovering in the skies over Denmark during a visit with my mom in Odense city around 04.16 pm. Remember to see the hi-res photographs at the bottom.

Using my camera as binoculars

August 20, 2017, was a day with unstable weather, changing between sunshine and rain. And with the many fast-changing clouds and cloud systems, I chose to bring my camera with me on a trip to my mom’s house (promised her to walk with the dog). It was in the hope to catch some awesome cloud systems with the blue sky as background.

But while I was there, I thought I would first try to attach the 300mm lens and use it as binoculars. With a 300mm zoom lens, you can see much farther away than a standard 18-55mm zoom lens can do. I put the chair in the lying position out on my mother’s terrace and began searching the sky above me. It was only few months ago I caught another massive UFO fleet in the sky few hundreds meters away. With that in mind, I was also ready to look after some UFOs.

Something moved very fast up there

While I was looking around the sky above me, I saw something move very fast. I could not see an actual vessel hovering up there, just the movement of something. I began to take photos of the area where I saw something with max focal length (300mm).

And one photo particular is interesting, it shows a high altitude UFO. I think my camera focus was on the clouds. And since this vessel is slightly out of focus, I assume it is at a higher altitude than the clouds. The vessel seems to be an edged triangle shape. On top, there are some elevations. It is a very odd shape you are not used to seeing in the sky. This is not an airplane.

The interesting part of this thing is clearly the elevations on top. Could these elevations be towers or some sort of sensor equipment? One of the elevations seems to have a cylindrical upright shape, nearly like a water tower. The other elevation looks more like an ordinary antenna since it is very slim in relation to the other larger elevation. See the object in this image (object A). 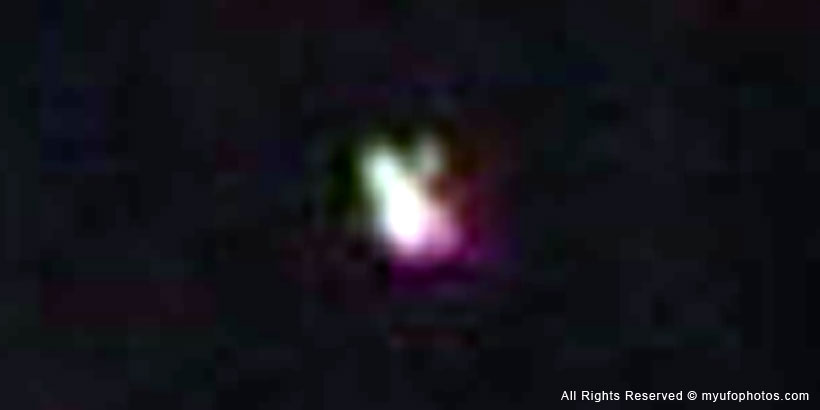 I wonder if this is an alien AWACS (Airborne Warning And Control System) designed to detect all kinds of living and moving targets. If I was an alien in my spaceship, I would also like to know what is happening around me, especially if I was on an alien planet. The scout fleet I send out also needs to be directed and alerted about movements nearby. 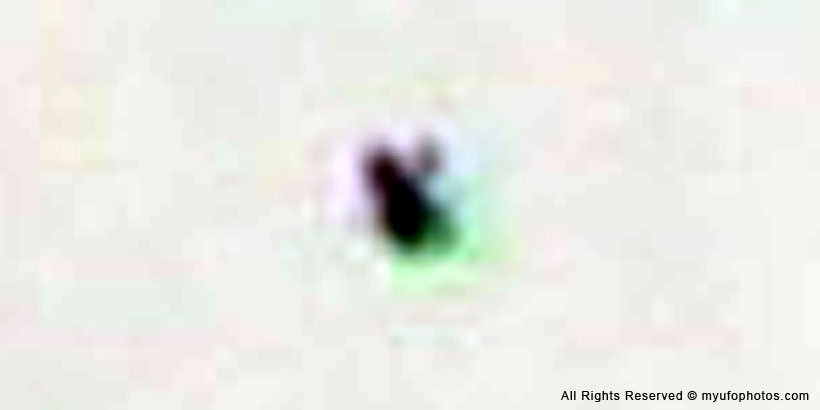 In a terrestrial sense, AWACS is used to detect aircraft, ships, and vehicles at long ranges in surveillance and combat situations. Actually, it is an airborne air traffic control. Funny enough, the Boeing E-3A aircraft that are used for AWACS operations, also have an elevation on top, which is the rotating radar dome. Other types of similar aircraft also have a radar dome on top.

The high altitude vessel with what I think is sensor equipment (A) did not come alone. And the image I link to with object A, B and C, is actually only a small area of a much larger photo IMG_6437.jpg taken at ‏‎04:16:30 pm. 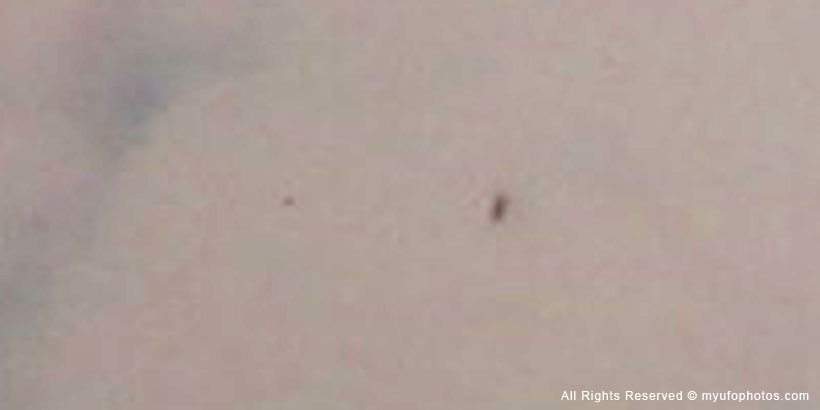 In above picture, which is a negative, two unknown objects assigned with “B” (in this image) appears. The picture got some extra brightness too. It shows a disc-shaped UFO with its probe probably.!? 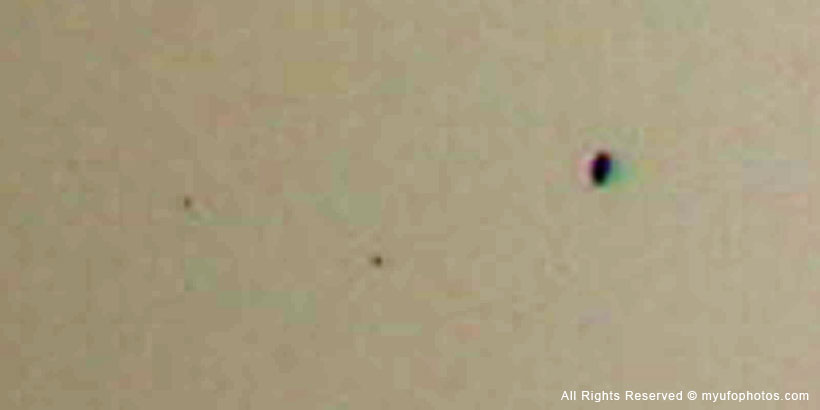 In the next photo (IMG_6438.jpg) taken 4 seconds later (04:16:34 pm), these objects are gone. But they seem to reappear on the next and third photo (IMG_6439.jpg) 2 seconds later (‏‎04:16:36 pm), also in the top left corner, now with two probes. I assume they are probes related to the disc-shaped vessel. You can see them in above picture which is a negative. 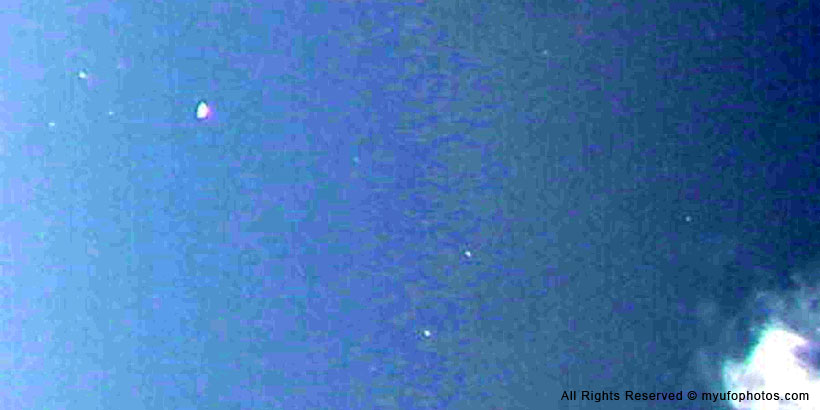 And as seen in above picture, which is a small area (top left corner) of the next photo IMG_6440.jpg, it evolves into a fleet of UFOs. In the following row of photos up to IMG_6445.jpg, this pattern consists in the top left corner. You can see the full list of all high-resolution photos at the bottom of the article and study this unidentified aerial phenomenon (UAP) by your self. 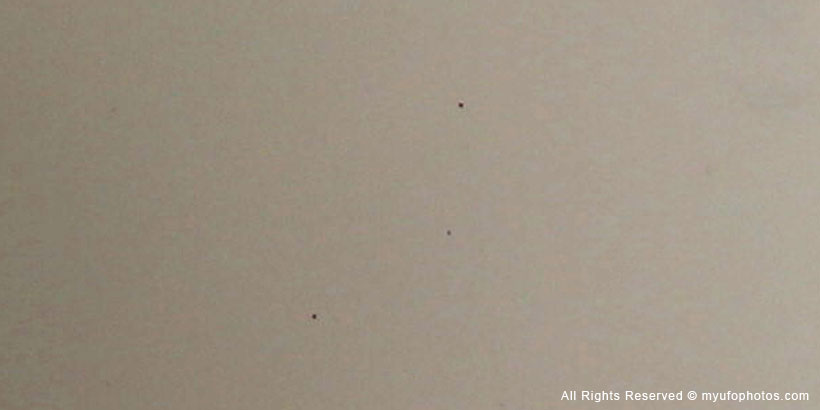 Furthermore, if you look to the right in the photo IMG_6439.jpg with the disc-shaped vessel and two probes, you will see a triangle formation with three spherical objects. You can see that in the above picture, which is a Negative with some extra brightness.

Strange UAP in the sunshine that are assigned with “C” in this image (a small area of IMG_6437.jpg) at the top left corner. At first sight, the UAP below seem to be a physical object at the edges. But in the middle it seem to be partly transparent. 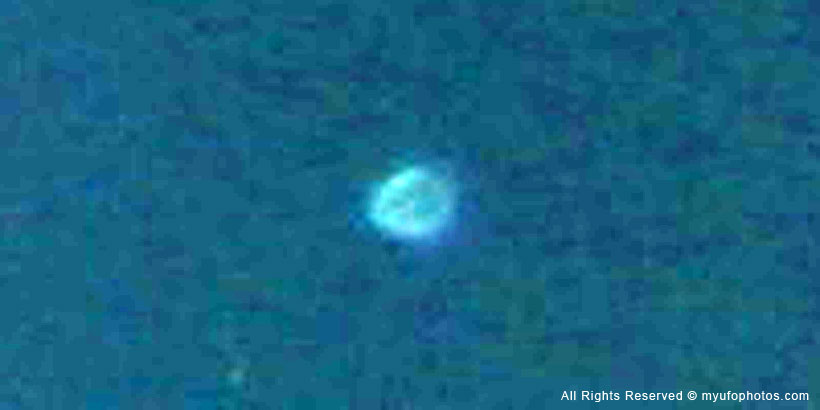 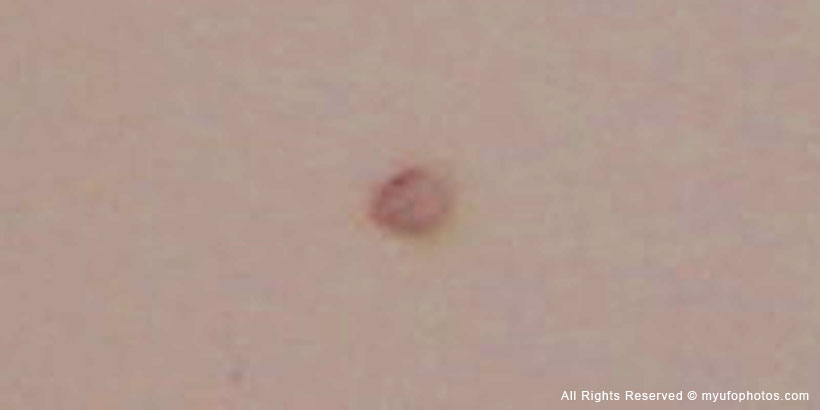 I have seen numerous examples of lens flares caused by the Sun. Some of them can have a very high light intensity and completely render the actual photo behind it invisible. In some cases, these can look like a secondary Sun or a planet nearby, but they are just artificial light. When you shoot photos with the Sun visible in them (or nearby), you should always have a lens flare.

And the object in above last two pictures seems to be partly transparent in the middle. The transparency is the most eye-catching in the last picture above, which is a Negative. The object is not extraterrestrial of origin or the fly-by of an unidentified aerial phenomenon (UAP) but a solar lens flare.

Aliens in the sky above Denmark

So, we have the high altitude UFO with sensors/antennas, the disc-shaped object, the probes and all the other small unknown objects in the photos. If you are a skeptic, you would have a lot of work to do here. For me, it simply indicates, that there really were aliens in the sky above Denmark that day. And there is one more interesting object in the last photo (IMG_6446) to show. 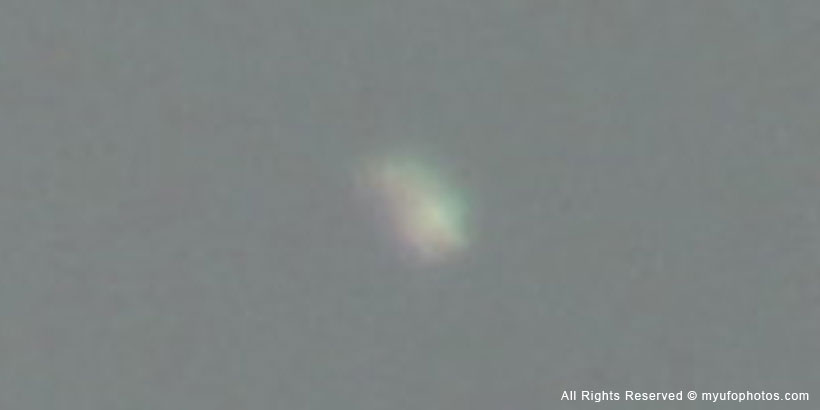 In the top right corner in IMG_6446.jpg there is an amazing object with green glow on its right side. The glow comes from what seems to be a physical object. The glow is opposite the direction of sunlight, which comes from the left. There is also a faint bright spot with higher light intensity visible on the lower part of this thing. It melts together with the green glow. The spot is opposite the direction of sunlight, so it may not be a reflection of sunlight. The source of the bright spot may come from the object itself. 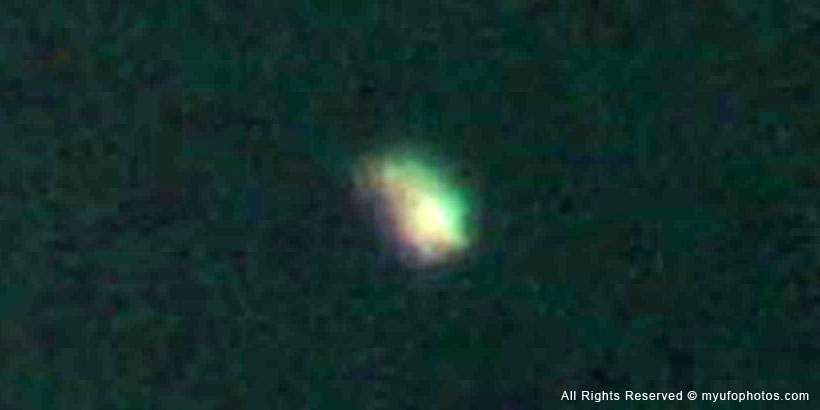 The picture above got some extra contrast. It shows the object with some details. Looks like something is sticking out in both ends (top and bottom). In the middle there is also something on the object, looks like a crater at the distance. I am always alerted about lens flares in sunny photos. This seems not to be a lens flare but a physical object (UFO) clear enough to reveal some details.

I also try to be cautious when claiming there are extraterrestrial vessels in my pictures. But the presence of the UAP (unidentified aerial phenomenon) here is so overwhelming, that I am convinced that the origin of some of these objects is extraterrestrial. Especially the disc-shaped UFO with probes and the high altitude UFO with towers or sensor equipment.

Some of the objects seem to be very high up, especially the thing with elevations. It is probably above the clouds. But the disc-shaped object with what appears to be probes, seem to be at a lower altitude.

The smaller objects seen in the above picture seem to be in front of the clouds. The picture is a cropped and much smaller area of IMG_6445.jpg (see top left corner). The picture above was processed with Auto Tone in Photoshop.

The photos have been edited (copyright information) but are without any form of image processing. You can download the hi-res photos to your desktop (research only) and see them in an image viewer. Or you can load them into for example Photoshop, crop out the top left corner, magnify, and then give them Auto Contrast or Auto Tone to see the objects as clear as possible.