Half flying saucer under teleportation in the sky (?) represents a very strange UFO photo. It actually looks like something that is coming out of the blue sky. The image was captured above Denmark on May 25, 2017, at ‏‎02.40 PM local time Odense city.

The picture above is a cropped and magnified version of the original image (see number 4) processed with Auto Contrast and Brightness in Adobe Photoshop. The photo is part of a larger collection of photos taken inside a secluded pasture where I had a creature sighting the day before on May 24, 2017. And it was in relation to that sighting I went back to the site again on May 25th with my Canon EOS 60D DSLR camera with standard Canon 18-75mm zoom lens attached.

Half flying saucer with a dark field behind?

It really looks like a half flying saucer to me. And a part of the vessel has vanished into a dark field behind it. The flying saucer is the bright spot or reflection that I see as a fuselage with a dome on top.

Since the Sun shines from the right side the dome cast a shadow to the left side. Some of the fuselages lay in shadow. Rest of the object leftward seem to just disappear into a dark field behind. But can I trust what I see? This is probably not a WYSIWYG

In reality, I can´t figure out what I am looking at? It does not look like a cloud manifestation. It does not really look like an insect either. The light reflected back from the object is of such size and intensity that I don´t think it can be a small insect.

Is this an extraterrestrial alien vehicle teleporting into or out of a field? Difficult to say. Teleportation captured on photography would be nice but at the same time problematic since it is a still photo. You will never see the whole process with one still photo. I can only confirm this UFO looks very strange in the image. And I still get the imagination of a flying saucer

Since the picture above is a negative, dark is bright and vice versa. So the two dark spots in the image are sunlight reflected by the object. I can still see a flying saucer but it is not half anymore and the dark field behind is partly invisible. The teleporting saucer going through some kind of stargate is not viable based on the negative.

When I make a calculation in Adobe Photoshop using Exclusion with red and gray channels, the object appears slightly different as seen below. The so-called “field” is visible again but different. There is something behind the UFO and it now looks like fog.

The two dark spots are the same sunlight reflections as seen in the orange negative above. They are just more outlined in the calculation and it looks like we have a UFO with two clear reflections. And in the next photo taken 4 seconds later (see below) actually shows an object in the fog of clouds nearby the first position. It has two reflections (or light sources). 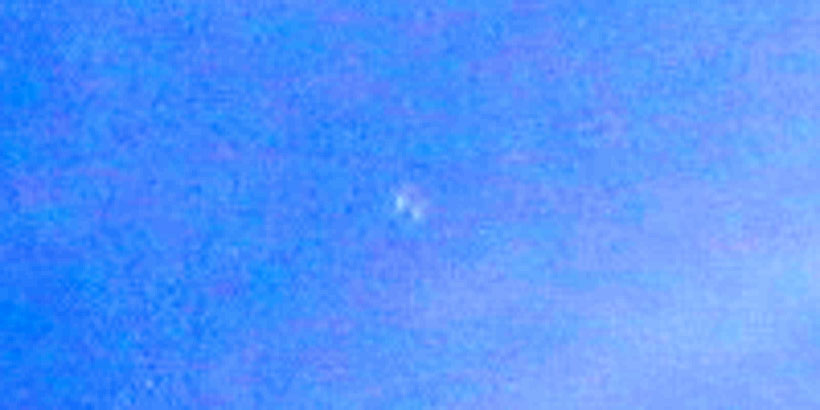 If I magnify above picture this object gets blurred in the image. The mystery is difficult to solve. Maybe it is not a half flying saucer teleporting into our world and maybe not an extraterrestrial alien vehicle observing mankind. But very strange things are happening according to the photos and pictures here. The mysterious object is still a UFO (Unidentified Flying Object).