Heavy contrail weather and Sun halo (photos) were just another day with carbon dioxide (CO2) emissions high up in the atmosphere. The contrails were persistent and caused a messy cloud cover throughout the day. The photos you will see here were captured between 1.19 PM and 3.34 PM local time on October 9, 2009, in Denmark, Odense city. 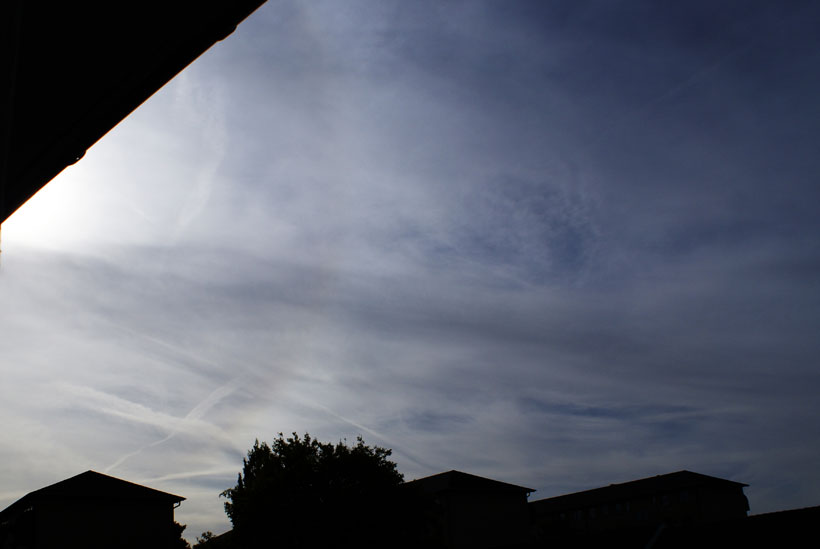 The photo above was captured at 1.51 PM local time. It shows the Sun halo partly to the left with a web of contrails. Across the image coming from the far right, there is a cotton-like cloud stripe that seems to be an Altostratus cloud. The rest may be caused by fragments of aviation condensation trails. The Cirrocumulus-like cloud pattern to the right from the middle is from air traffic.

The photos below show what I will call heavy contrail weather. It can be difficult to discern any known cloud type in this mess. Actually, what I see here is only fragments of condensation trails from aircraft traffic, see below photo particularly. 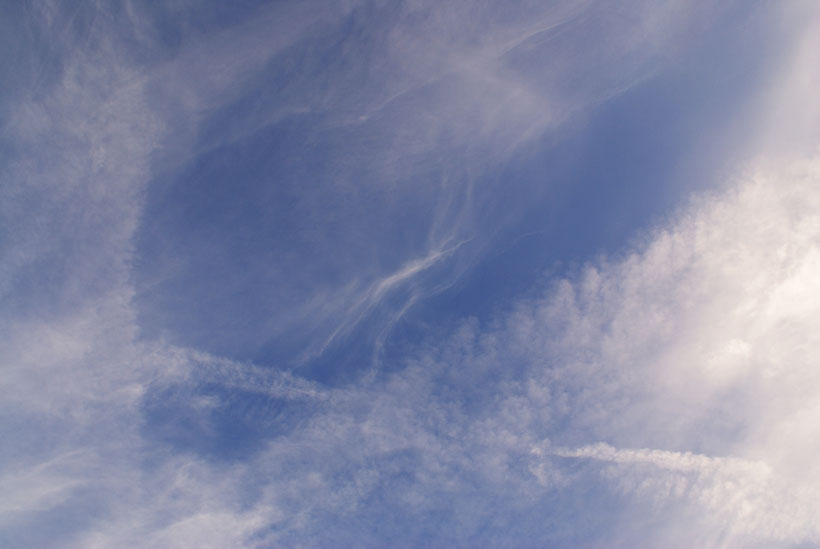 The photo below is a magnification of the thickening in the middle of the above photo. This thickening (or condensation), is what I believe one of the threads or slats, that is a part of the structure of a typical contrail, see this example. It is a typical sight in heavy contrail weather. 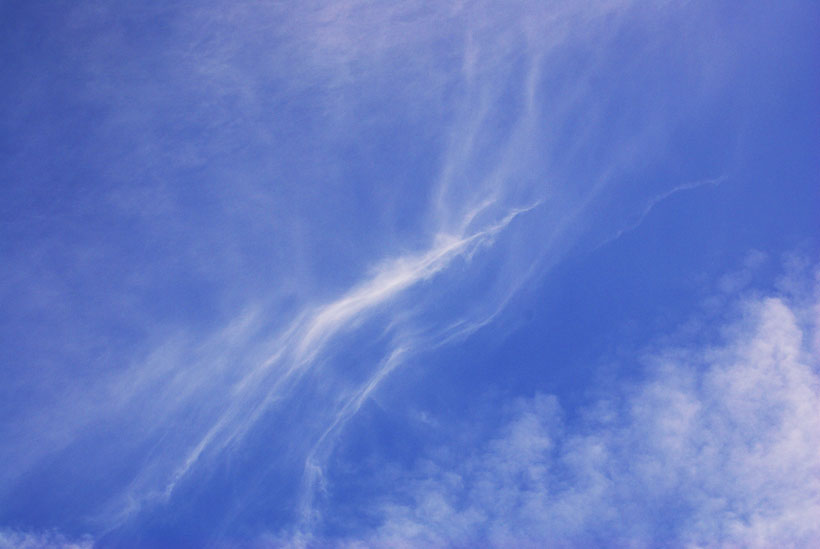 Below photo shows two different types of contrails. It is a clear sign of two different jet engines. The top contrail is a rare sight. The one below is the type you see all the time in the sky. 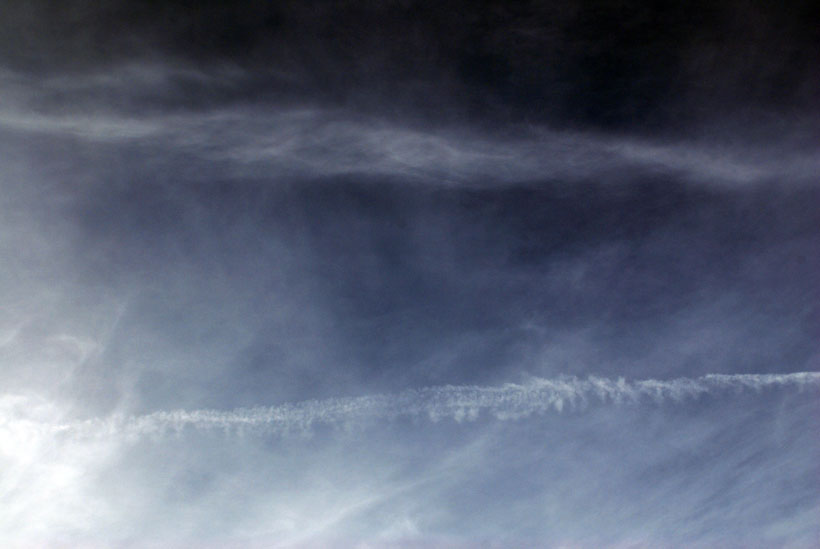 It looks like condensation trails (probably) transforming to Cirrus clouds. That´s the puffy strokes of white clouds in the middle of below photo. Contrails are also seen to transform into the Cirrocumulus cloud type. 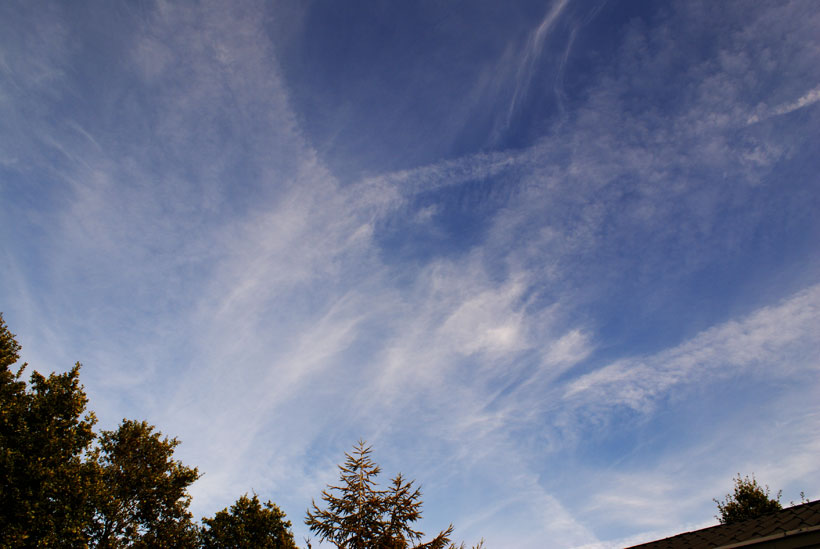 The heavy contrail weather or contrail bombardment in below photo is caused by the wind. Well, you can have three or four aircraft flying simultaneously or you can have aircraft flying with intervals in the same air corridor. The wind blows the condensation trails in one direction and leaves space for a new one. That´s what I think causes this pattern. 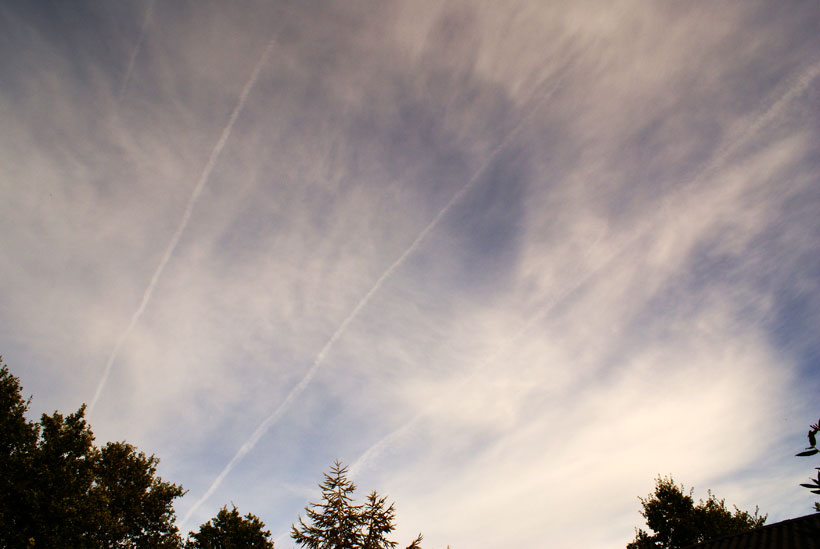 The above photos were taken from 1.19 PM to 3.34 PM local time in Odense city. Also see the photo gallery further below.

The visual pollution from air traffic can in some periods be an everyday event. Blocking out the Sun and our intake of D3 vitamin in the summer period. Visual pollution caused by heavy contrail weather like this above may have a psychological influence too?

There are probably a lot of people who for different reasons do not feel bothered by this. But I know with myself, that to get up in the morning and discover a deep blue sky feels so amazing and so nice. To see that being destroyed an hour later is just horrible.

Even a deep blue sky with the beautiful (and natural) Cumulus clouds feels nice for the soul. It gives you a hint of how the world really should look like. For more on cloud types see the NWS cloud chart.

See the weather history for Denmark (Vojens-Skrydstrup Air Base) on October 9, 2009