Boeing 747 forced down by UFO trio was a 15 minutes long UFO sighting I had when I was 18 years old. It happened over Southern Denmark in Odense city around August 1987. It was an incident involving a low-flying Boeing 747 aircraft and three unidentified flying objects (UFOs). For me, it looked like this alien trio blocked the air corridor for this large aircraft… 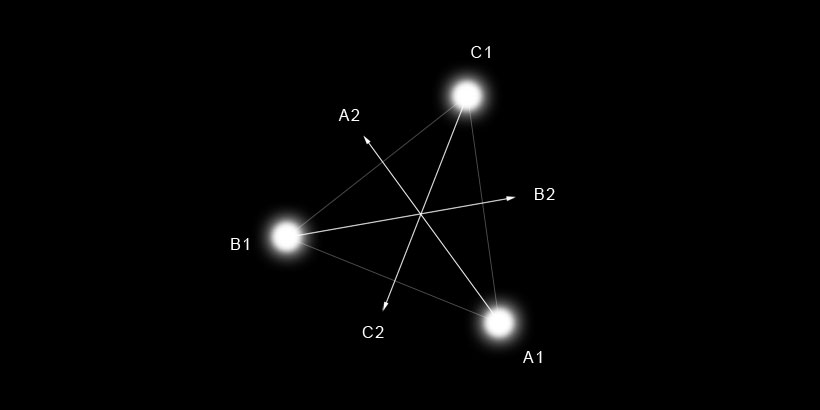 The sun shone from a cloudless sky on a pretty hot day. I think it was just after noon around 1 or 2 pm. I was on my way home and walked along the path system that leads directly down to the place where I had my very first UFO sighting and alien contact seven years earlier. But before I got that far, I got a very rare sight I will never forget.

I looked straight ahead and saw a big airplane coming directly towards me. It came from a westerly direction slightly to my right side at very low altitude. Maybe only 1000 feet, because it seemed extremely low. The landing gear was retracted and fortunately, it did not attempt to land. A short moment I thought I should run, but the aircraft kept a steady course ahead.

It had 4 jet engines and the cockpit was sitting high. I assumed it to be a Boeing 747 aircraft going very low for some reason? I followed the plane with my eyes and then it passed directly above me, I looked straight up into the bottom of the large aircraft. And then the 747´s horizontal stabilizer, the rear, disappeared out of my straight up vertical sight, I looked up in the deep blue sky. And high up there directly above the aircraft, I discovered some birds. I thought it was seagulls flying high above me and the aircraft.

From my position and point of view, they seemed to actually fly very close to the Boeing 747´s flight path. If not directly on the flight path, they may have been around the same air corridor for this aircraft. If the Boeing 747 had the same high altitude as these “birds”, there would have been a high risk of collision.

I remember I looked one more time after the plane that continued its low flying path. And then I looked up at the “birds” again. After a short moment, I realize that it was probably not seagulls as I first assumed. I saw three round objects, they were white luminous and disc-shaped and flew in a quite unique way. This UFO trio flew in a strict triangle formation, moving in between each other in a cyclic pattern. To date, I have not seen any terrestrial crafts imitate this, never!

Then I finally got aware of this very strange pattern in the sky, which was quite mathematical, like a precise watch, I realized I was witness to real alien activity. There were space aliens in the sky…

Those unidentified flying objects were very high up! Because of strong sunlight, it was hard for me to focus my eyesight on the objects. I had to look straight up and because of that, I quickly got a sore neck and had to look down again. After 5 minutes or so I began walking home. But I continued to observe the UFO trio, switched between looking straight up and down.

I reached my home, ran through the garage and out in the backyard, looked straight up again. Yes, they were still there. I remember I shouted to my mum, stepdad and sister, which were inside the house at the time, that they should come out and see the UFO triangle. Unfortunately, at that time we had a very bad atmosphere at home. Apparently, nobody wanted to listen or take notice of my shouting outside in our backyard.

At last, I got more and more pain in the back of my neck. I tried to lay down on the grass and observe them from there, but I learned this was not the best solution. My sight began to blur. Finally, I gave up watching the objects and walked into the house trying to get the attention of my family. But still with no results.

Around 5 minutes later I walked out again and now the UFO trio has disappeared. I checked again a little later, but they were gone. I observed the unidentified flying objects for 15 minutes.

Animation of the cyclical pattern

The animation below illustrates the objects triangle formation in which they moved in a cyclical pattern. And it was exactly that detail that made me convinced, that it was something extraterrestrial I observed. When one of the objects moved in between the other two objects, it began slowly and then speeded up in the middle and slowed down again. And the next object began to move. It was a pretty bizarre sighting and the objects were right above me through the whole observation.

They did not seem to move in any direction. They just hovered on the spot and made their cyclic pattern. I do not remember I heard any noise from the UFO trio. After the Boeing 747 had left the area and the jet engine noise was gone, everything was normal and quiet again. I’ve seen numerous videos with the same white lights in the sky, but never the way I saw it that day.

You may wonder just like me, what this cyclic triangular pattern really means? If it means something at all? Their movements were very precise performed, like a clockwork, and kept inside the same triangle pattern all the time. I experienced it as symbolic, mathematical and magnetic.

I was not in doubt about what I just saw. For me, this was the work of extraterrestrial space aliens. No terrestrial crafts perform such maneuvres. These three “magnets” in the sky had to be aliens in their anti-gravity spaceships.

I think it took a couple of days before I became fully aware, that the Boeing 747 had played a crucial role in the UFO trio incident. There must have been a reason why it flew so low? We don´t have an airport nearby that can handle Boeing 747´s.

Beldringe Airport nearby, now H. C. Andersen Airport, receives smaller passenger aircrafts some days in the week. A Boeing 747 has, as I know of, never landed in the airport. See it in Google Maps here

UFO trio in the flight direction

I wonder if the aircraft has been directed down to the minimum altitude intentionally? There have probably been some mysterious blips on the radar screens somewhere. These blips have most likely been in the same air corridor as the Boeing 747. And then they were not able to identify or get radio contact with the unknown objects, they were forced to direct the plane down to low altitude.

One thing is, that you have a low-flying Boeing 747 over a city with no airport nearby, which is unique enough in itself. But when there is also this UFO trio high up probably in the flight direction. It makes the story a lot more interesting.

And what have the pilots experienced? Have they also observed this phenomenon in front of them? Or have they just been directed down to a lower altitude before reaching visual contact with the unknown objects? Or were they directed down without knowing why? It might be interesting to hear their story.

But it is now over 30 years ago since it happened, so time is probably running out. It would otherwise be a nice confirmation of my report of this incident.

The Boeing 747 came from the west and flew in an easterly direction. The plane had a compass direction of approx. 105 degrees! It was white on the upper side and metal gray on the underside. Unfortunately, I can not remember the exact date but have probably been around 22 August 1987.

I remember another time in the mid-eighties, when me and my stepfather was outside in the backyard of Søparken. A Boeing 747 passed us in extreme low altitude in the opposite direction towards west. This was a white transport aircraft with red markings. I think it was a FedEx plane. What the reason has been I am not aware of.

It was cloudy and I had no experiences with the UFO phenomenon that day. But I remember this flyby clearly because I could see the co-pilot inside the cockpit. Well, I was very young at that time, just before teenager, and I don´t know if I can trust what I think I remember I saw. He was wearing his black uniform and a black cap with yellow decoration. He was looking down at his dashboard.

And I remember there was a third flyover in very low altitude. I was very young at that time. I was in my bed and it was a late night when I heard the roar of a big aircraft. I could see it out of my window then it passed. This one flew towards East.

I wonder if all these low-flying aircraft have been ordered down to a lower altitude because of the UFOs?

Other experiences with aircrafts and UFOs

Another experience I had with an aircraft was when a military aircraft chased something above Odense city in 2010. You can read more about that in the Military aircraft in dramatic UFO fleet hunt over Denmark-article.