NASA image evidence of extraterrestrial life on Mars is the question I ask my self when I see PIA10214. The panoramic image captured by the Spirit rover on Mars November 2007, made headlines in UFO and conspiracy communities. Because in this particular image, there were several strange objects and something that seem to look like humanoid figures. 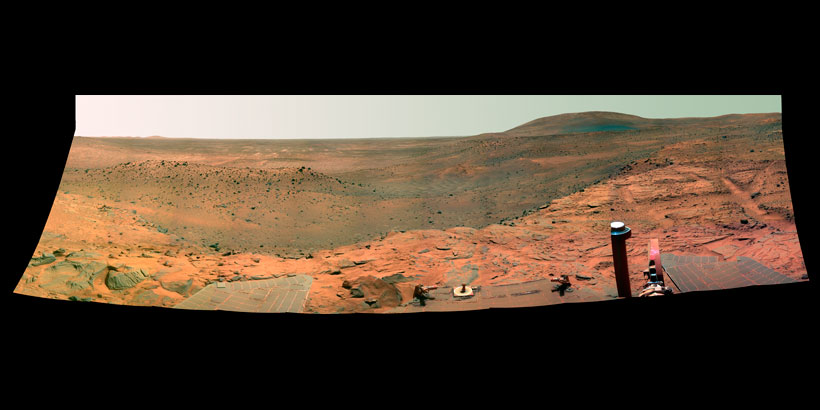 The panoramic picture above taken with PANCAM can be downloaded here as a *.JPEG or as a 130 MB large *.TIFF image file. In this case, I use the *.TIFF file to extract several odd objects present in and near a basin somewhere on the red planet. 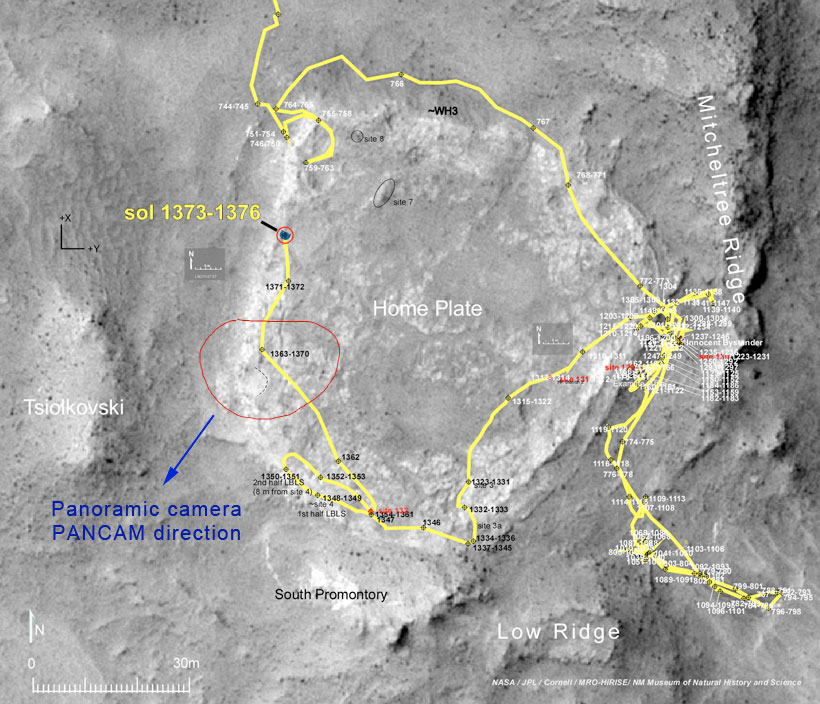 Image above is a detailed traverse map that shows the Spirit rover position on a geological plate called Homeplate. See all traverse maps here or see the particular traverse maps related to the panoramic image PIA10214 here

For some of you, the next couple of pictures may be old news. But some of the pictures I present further down the page might not have been shown to the world before. Adobe Photoshop was used to process some of the images below.

There is something very strange going on on Mars. It is evident in the panoramic image PIA10214. Something that looks like a humanoid, or a Martian, seems to walk down the hill out in the lower left side of the image. The unidentified object has a dark outfit with apron and his face seems to be masked. In front of him lyes something that looks like a humanoid figure on the ground. If this is space aliens or maybe native extraterrestrial life on Mars I do not know. But it looks suspicious. 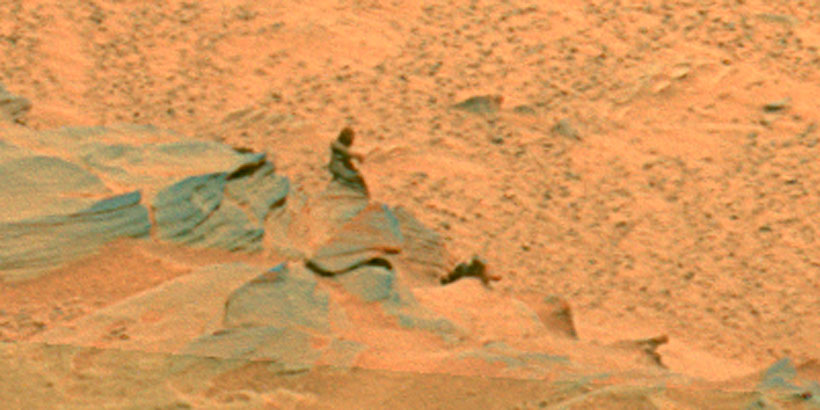 Unfortunately, this is not the absolute evidence of extraterrestrial life on Mars. Even when it strangely looks like something we know, a humanoid figure walking down a hill. It is possibly our imagination playing tricks on us when we look at these fantastic outer world images from planet Mars. It could be rock formations that coincidentally looks very odd at that time on the day.

I admit I have a strong imagination and when I saw the cropped and the magnified image above (and below) I was surprised. It really looks like someone is walking down a hill. Below that someone lies another figure that looks like the head of a humanoid. The whole situation gives me the feeling, that this is a Martian kicking down a humanoid.

The Martians footwear is covered by the rocks but you can see the rest of his body. The humanoid also seems to be partly behind rocks. But this is my imagination running the game because I really don´t know what I am looking at? 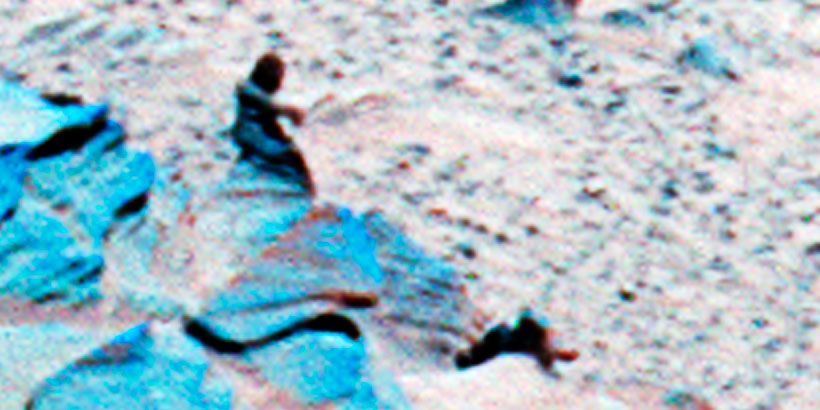 The Martian figure could be a continuation of the rocks below. The rock formation could just stand up vertical in an odd way. Objectively seen, the object is very clearly delineated against the background. Maybe native extraterrestrial life on Mars? 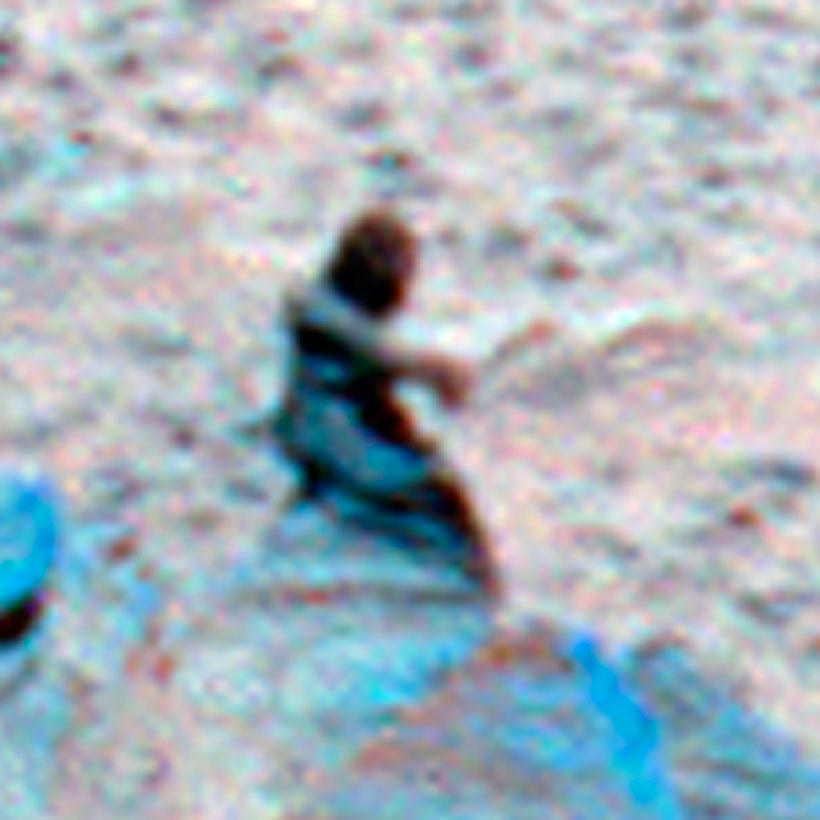 Some will probably find that it looks as if he holds an oblong object with a red color at the end. It is in his outstretched hand. But I think that must be the background. If you look at the background around the Martian, it looks the same with red pixels scattered arbitrarily in the landscape. But it really looks like a stretched arm where the clothes only reach the upper arm. Rest of the arm and the hand seem to have human skin color. Is it a sign of extraterrestrial life on Mars or just a rock formation?

Something is laying down there on the rocks. What I saw as a balled head with human skin color hanging over the edge of the rock is now more blurred. It is mixed with the rocky background in the magnified picture below and does not really look like a humanoid´s balled head anymore. But as it lays there it seems not to be a part of the rocky foundation. 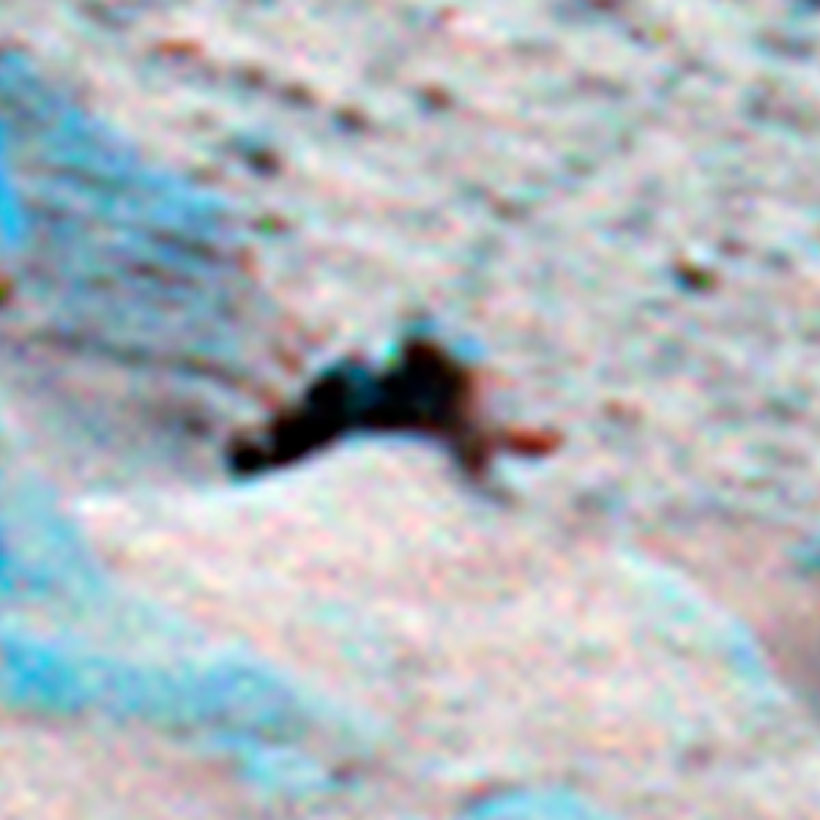 Even when it is not really resembling a humanoid precisely I can still imagine a human figure lying there on the rocks. Maybe it is the skin color that triggers something in me? If the humanoid object is a rock it is maybe a different type of rock? The different colors may indicate that there are different types of rocks or materials present just there? Or extraterrestrial life on Mars?

Mars landscape and the shadows

Alone that, to see pictures from another world on the first parquet, is pretty shocking. The planet landscape is haunting with its natural curved rocks and odd rock formations. The Sun is obviously shining from right above and creates strange shadows. Shadows that make you see something different than it really is – light/shadow relations that tricks your eyes. 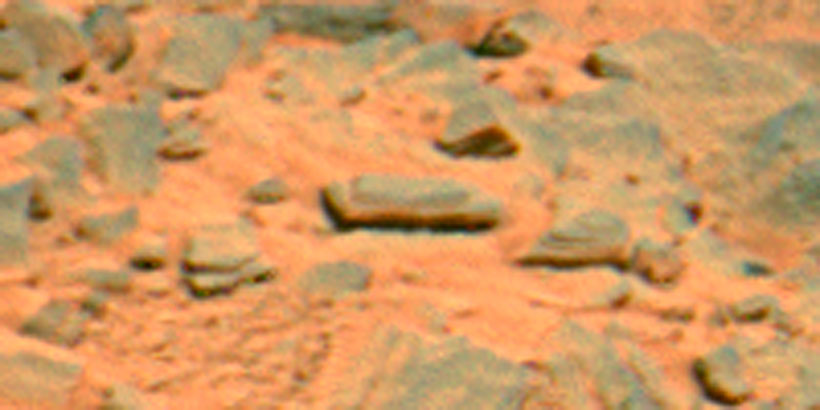 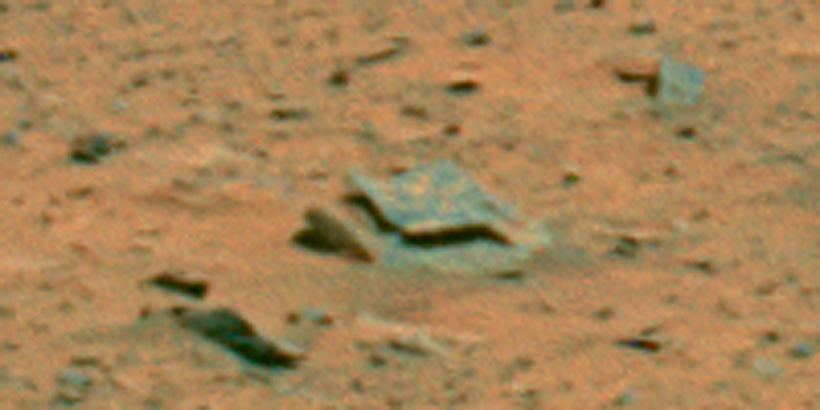 The stone formation in the above picture seems to have an indentation on two sides. It almost looks like if the rock was processed and hollowed. From the perspective, it looks strange, and the rocks on Mars are strange for an earthling. The geology does not exactly look the same as on earth. Mars has been undergoing its own unique geological process. 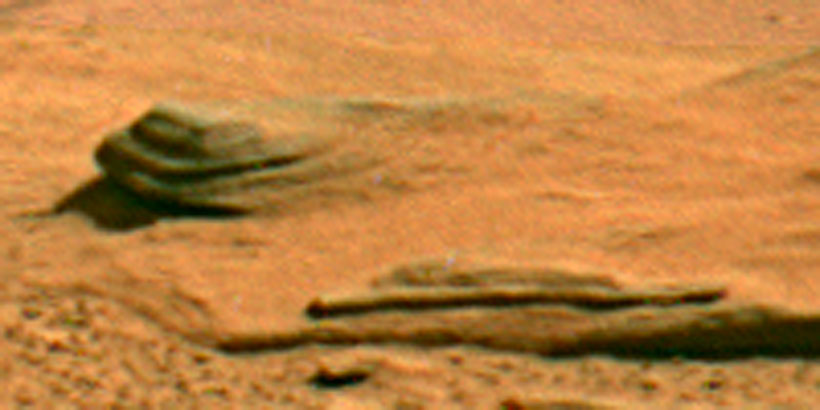 The above picture possibly shows the type of rocks that are causing the odd shadows in the landscape. What you see depends on your position in relation to the rocks and the angle of sunlight.

There are many strange rock formations and stones in this particular Mars landscape seen in PIA10214. And it seems that there are different types of rocks scattered in the landscape. In the picture below you see in the middle a vertical dark structure. To the right of it, and scattered around it, there are lighter colored rocks. The dark vertical structure and the greenish rocks to the right both seem to turn the same side towards the Sun. And yet they have completely different colors? 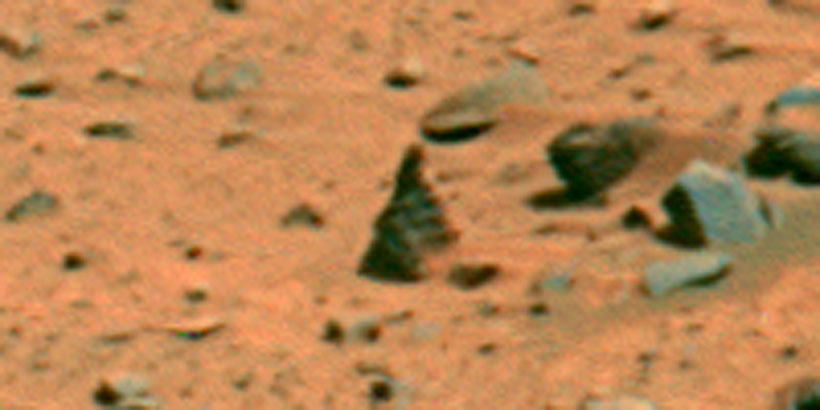 A short research after black rocks on Mars turned out to be basalt, a dark volcanic rock (link). And the structure in the above picture is almost black, so maybe it could be basalt we are looking at here? Just below the black vertical structure, there is a curved building complex. At least it could look that way from the perspective. 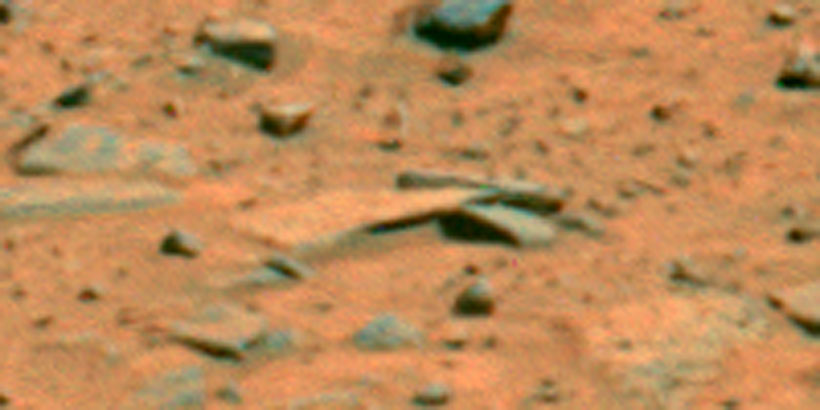 Somewhere below the middle in the panoramic image PIA10214, there is an object that looks round and cylinder-shaped. It pretty much looks like a barrel half buried in the sand. My immediate thought was rocket booster, see below image. 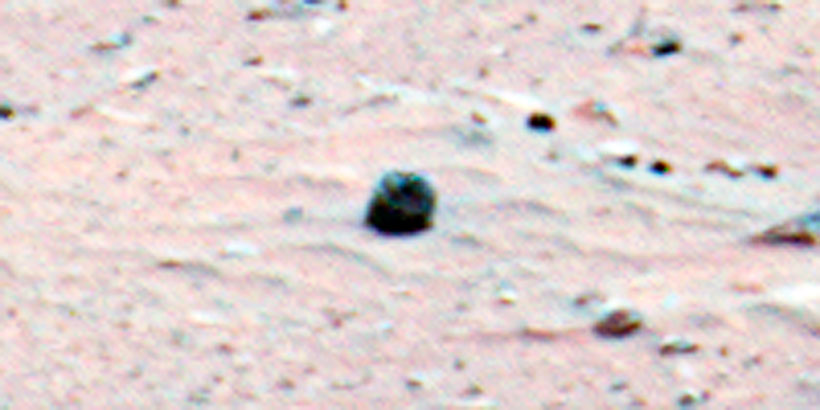 This is some of the things you can find in the landscape of planet Mars shown in PIA10214.

I think that the Martian and Humanoid portraits further up in the article are very odd. But in this kind of landscape, there are also a lot of possibilities for optical illusions. The shape of the rocks, the vertical volcanic stone structures, the shadows, the pixels and so on. Unfortunately, we can not use this as evidence for extraterrestrial life on Mars.

To think we have found some kind of hell where Martian reptiles beat up humanoids in a true nightmare scenario is pure fiction. We must not deceive our selves based on image mirages. If the PIA10214 image had evidence of extraterrestrial life on Mars, the most obvious indication would be the presence of plants, insects, and animals.

Have you seen the martian female ghostly figure on Mars?

The credit of all images on this page goes to: