UFO reveals strange condensation feature above Denmark in a still photo taken on May 25, 2017 at 3.09 pm in Odense city. The photo shows three unidentified flying objects (UFOs), one sphere and two elongated objects, and they are positioned in a tilted “V” formation in the sky. One of the elongated objects has a strange feature which show some sort of condensation process? 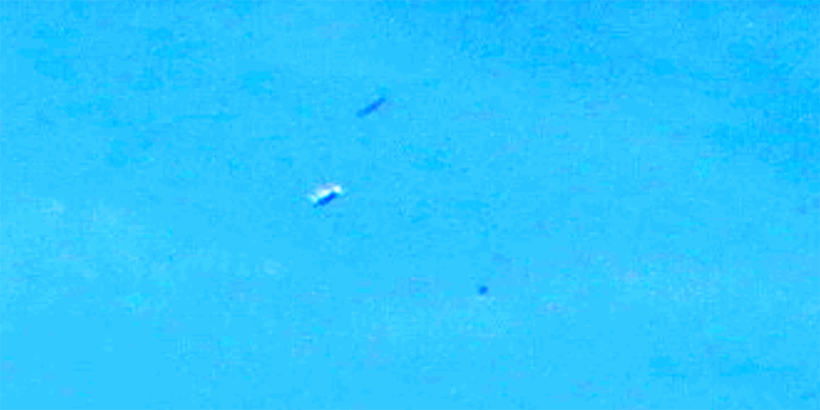 It does not look like a typical contrail left behind a terrestrial aircraft or a typical vapor trail (wingtip vortex) from a wingtip. It is something that looks like fog drifting off the top of the object. I am not sure what kind of process we look at but something odd is going on. And we even don´t know what kind of object we have here? Is it extraterrestrial, a UFO, or something terrestrial?

I only have one still photo (I did not see it while taking pictures), so we can not see what is actually happening. None of the three objects shows sign of movement in the photo. The supposed UFO condensation process must be caused by some other factor.

They could have been moving slowly, yes, but I don´t think it would be particularly fast, since the movement would be evident visually with motion blur in the photo. And it may be unlikely that a “wingtip” vapor trail in that size is created by a very slow moving aircraft. How fast you must move in flight to create a wingtip vapor trail I do not know. But you must move significantly to create friction between a surface and the air to create visible condensation I think. 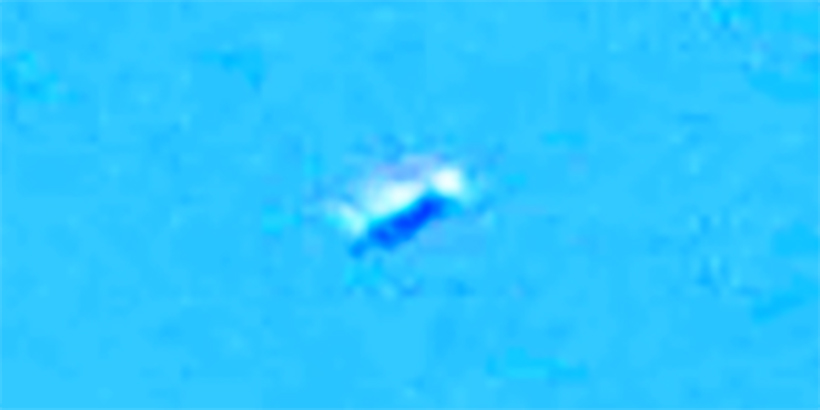 The picture above is the closest we can get before it gets too blurry in the pixels. It reveals an unknown presence in the sky, a dark area that is difficult to discern despite the fact that it is only a little bit out of focus. A tiny turn more on the focus ring on the camera would have caught it 100% in focus. It has some white luminous cloud-like substance on top. It looks like it is drifting upwards. The object seem not to move but hover which makes the cloud-like substance, the fog, a mystery to me.

Could it be the UFO surface temperature, ambient humidity and changes in pressure around the object that creates the cloud-like substance? There are many questions and this article is actually one big question? Why is this happening and why is it only one of the objects that seems to create this strange phenomenon?

Another explanation of this phenomenon could be that the UFO had a radiation field around it. Maybe something related to high voltage magnetism and a way to equalize gravity. Since Pentagon has acknowledged that we have vessels in our airspace that we can not explain, this triangle formations ability to hover could be a good example of exactly that.

Suspended mid-air without visible engines to keep it floating. Something hovering in the air above Denmark and it is not aerodynamic machines like airplanes. One of the objects, the sphere, should fall to the ground Immediately. But it does not. Something we don´t know about and can´t see is keeping this sphere suspended in the air.

There must be some kind of radiation field or strong magnetism around it that equalize gravity and produce the uplift. And this field could maybe change things like the state of water in the air and maybe change pressure and temperature also? Something we don´t know about produce this strange condensation phenomenon.

Or is this the cloud creation technology I suspect them to have in their arsenal of hiding measures? It is not always a good thing to hover above a city in a spaceship and make your presence known to anyone. You need hiding procedures and the most logical choice would be to use an existing cloud cover. And if there are no clouds at your position you create one. Then you can safely monitor the city below without anyone noticing the UFO activity above them.

Last photo out of 173 images

This UFO condensation photo ended my investigation inside a secluded pasture in relation to a creature sighting I had there the day before on May 24, 2017. That investigation produced 173 images and created this photo gallery