Massive contrail expansion with a mysterious visitor above Denmark on December 19, 2009. Photos were taken around 1.08 PM local time in Odense city. They show what seems to be a fragment of a contrail spreading out. It may not be the most exciting pictures you have seen, but they just show how much a contrail can invade the sky. 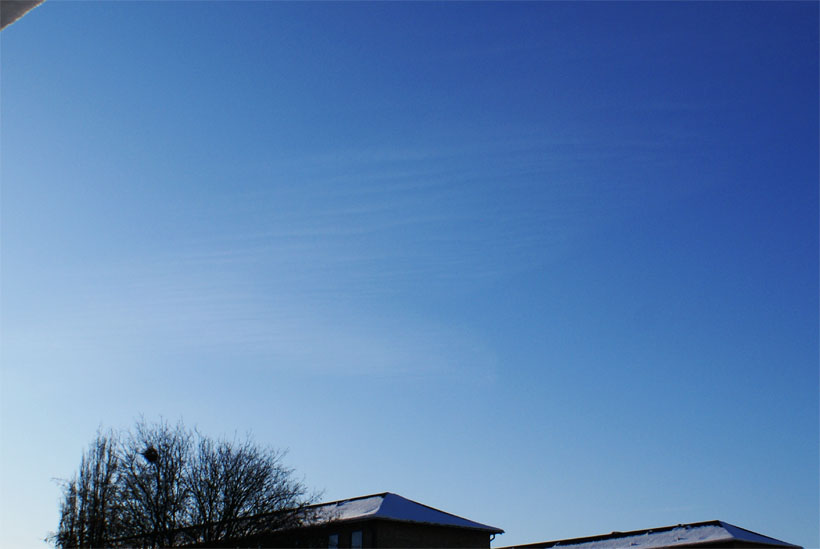 The main chemical composition of a normal condensation trail is carbon-dioxide (CO2) and water. Since the CO2 is an invisible gas, you don´t see it in the sky. What you do see is the water that freezes to ice crystals and creates the white stripes called aviation contrails. 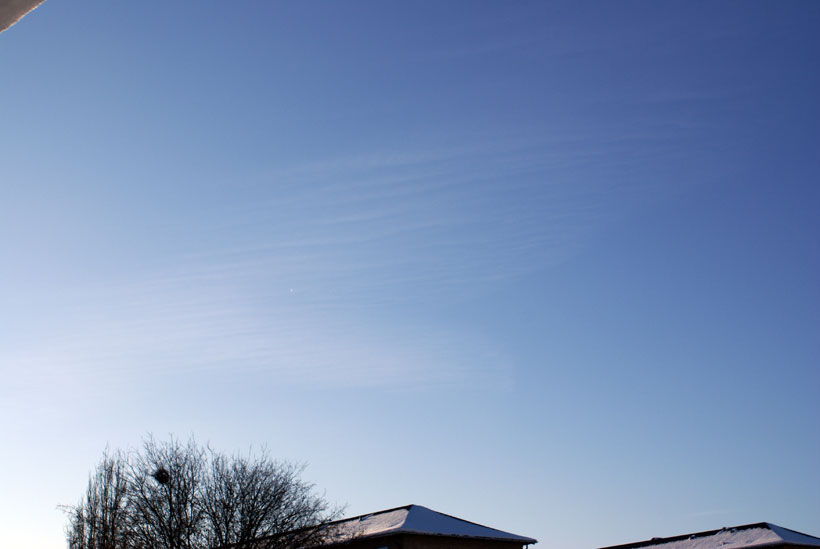 The top photo was photographed at 1.08.10 PM. The next photo above was taken at 1.08.28 PM 18 seconds later and shows the massive contrail now with a light in it. You can read more about the mysterious visitor here: UFO displaces sunlight?

The massive contrail expansion happened on a day where many condensation trails were left in the sky by air traffic. This one is an aviation contrail but it actually has the same profile as a typical Altocumulus cloud in bands. But it is not an Altocumulus cloud which occurs at an altitude between 6.000 feet to 20.000 feet. Aircraft condensation trails generally occur from around 27.000 feet to 40.000 feet. 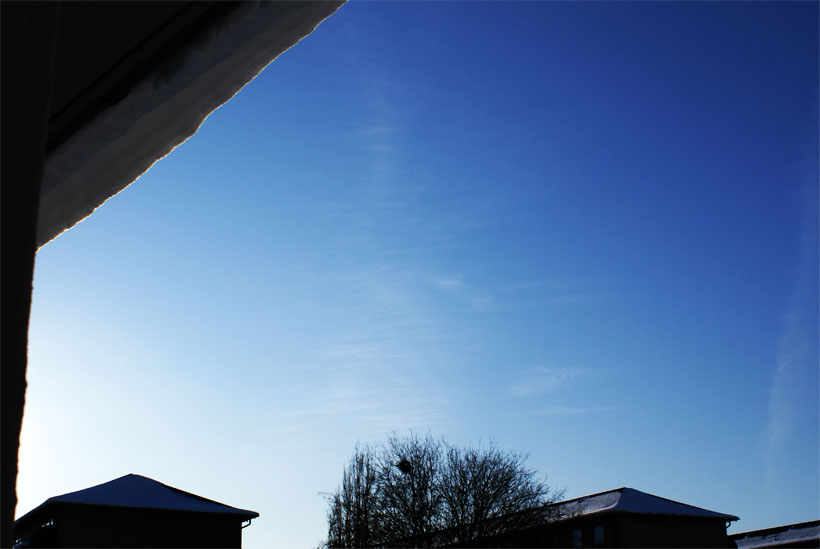 The photo above shows the same contrail at 1.25 PM 17 minutes after and it has now moved further to the south. Notice that some small clouds seem to have formed in that contrail.

When a contrail has been left to the weather’s whims it must obey the processes that create clouds. A contrail that is left above 18.000 feet will in some cases become a part of the prevailing weather system that sometimes creates Cirrocumulus clouds.

A contrail is a chemtrail

So a contrail could end up as a Cirrocumulus weather system! Even when it is not natural but created artificially by chemical leftovers from humankind. The chemicals we are spraying in our atmosphere will under any circumstances have an impact. But how much it will change the weather is up to the climate scientists to decide.

Air traffic (weather geoengineering) have an impact on the weather. If you are chemist then you also know that if you mix a drop of beer into a bucket of water, all water in that bucket will be contaminated with beer. That is an indisputable fact.

For each tonne of kerosene that is burned in a jet engine 1,24 tons of water and 3,15 tons of CO2 by-products are produced. Amazing to discover that when something is burned, then it expands explosively and actually become more than it was before.

So 1 tonne of kerosene becomes 4,39 tons of CO2 and water? For each tonne of water emitted, which produces the ice crystals forming the condensation trails, 3 tons of the invisible CO2 gas is also present there. When you see a massive contrail in the sky spreading out, you now know that the CO2 is probably expanding three times more than the visible ice crystals in the atmosphere.

There are no trees in the atmosphere

There is a tendency that CO2 is concentrating near the ground but is carried with the wind up and down. Carbon-dioxide (CO2) that is left high up in the atmosphere is not absorbed as it happens when it meets the trees on the ground. But over time it will come down fortunately but how long it will take is out of my reach. Climate scientists must explain the Turnover Time (T).

While our lifestyle is under repeated attacks and while we are getting billed with CO2 taxes, we can look up and see the mess in the sky. All that “poisonous” carbon-dioxide they tell us is catastrophic for the climate, is sprayed high above us where no trees can absorb it. The weather is geoengineered with CO2 in front of our eyes while we are punished by UN and IPCC.

And now they wanna to do it even more with sulphate: Controversial spraying method aims to curb global warming

See the weather history for Denmark (Vojens-Skrydstrup Air Base) on December 19, 2009

See more in the contrail and meteorology archives