Condensation trail transforms into Sylph cloud seem evident in contrail weather photos from Denmark on September 17, 2010. They show aircraft condensation residues known by their long continuous shape converting into other cloud types like sylph and Cirrus clouds. The photos were shot in Odense city at around 5.55 pm local time. 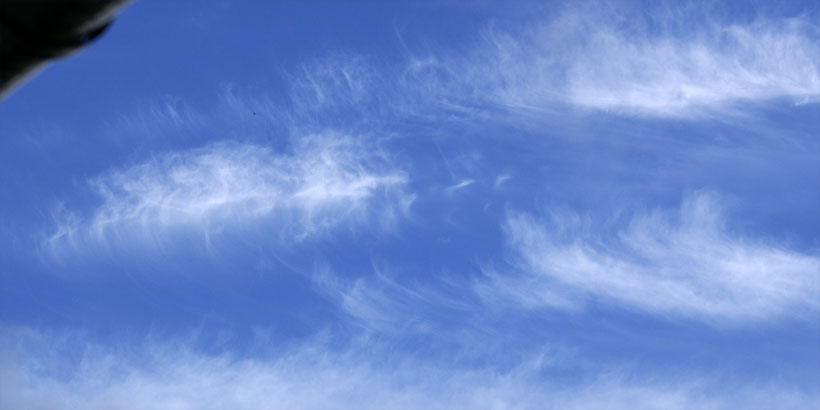 The above picture shows what I believe is a so-called Sylph (left) and a Cirrus cloud (right below middle) together. See the large illustration here. The “sylph” here is an old contrail residue that seems to undergo a process where a Cirrus weather system rules. It is obvious because of the Cirrus cloud’s presence right beside it in the above picture.

The above picture shows the sylph cloud closeup.

Sylph (sylphid) is according to Wikipedia a mythological air spirit that as terminology originates from the 16th-century work of Paracelsus. Paracelsus describes sylphs as invisible beings of the air. So clouds that people believe are spiritual beings got the “Sylph” etiquette. This one is not a spiritual being but a residue from a condensation trail (contrail) left by aircraft.

In the photo gallery above you see the full extent of the aircraft contrail residues which I strongly believe it is. It is seen as a long continuous cloud formation. I did not see the aircraft´s leave these. But since I have kept an eye with the sky since 2009 when I got my first DSLR camera, I know the shapes of aviation contrails very well. And these looks like typical condensation trails to me. Cumulus clouds are passing in the foreground close to the ground. Up behind at high altitude is the Sylph and Cirrus cloud.

See the weather history for Denmark (Vojens-Skrydstrup Air Base) on September 17, 2010