Amazing UFO fleet sighting in Denmark (video analysis) is about several unknown lights caught on video over Alleroed city on August 7th 2010. The sighting was recorded with an iPhone and the unknown lights seen in the video stands out pretty clear. What youtube user Femse filmed that night, is in my opinion one of the more interesting UFO sightings from Denmark.

You can hear the witnesses speak almost excitedly in the video (Danish language) which is fully understandable in relation to what they are seeing. There was real magic in the air that night, the unidentified aerial phenomenon (UAP) lasted for whole 20 minutes.

Then I first saw this video, I was amazed by the details of some of the lights. There are two large unidentified flying objects in the footage. The first large object shown in below picture has one big white light and four smaller more faint ones, also white. You will find it at the start of the video (above) at 0:12 where it is seen together with a smaller object that seems spherical. 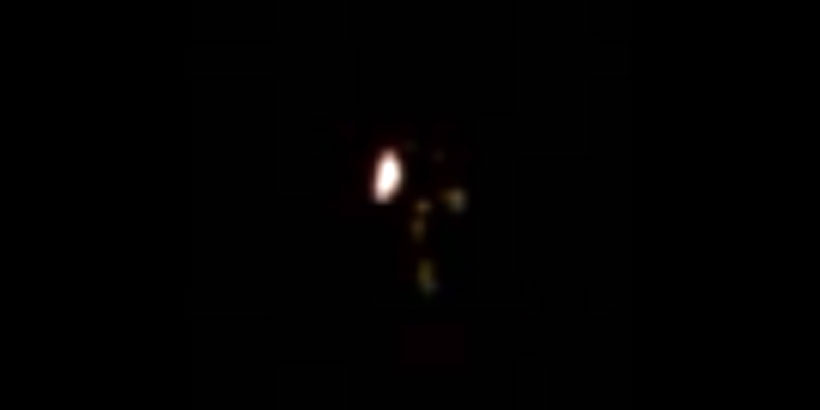 The other large object shown in below picture has two big lights, one green, and one white. It is followed by a triangle with what appears to be three spherical objects. You will find it at the very end of the video (above) at 4:36 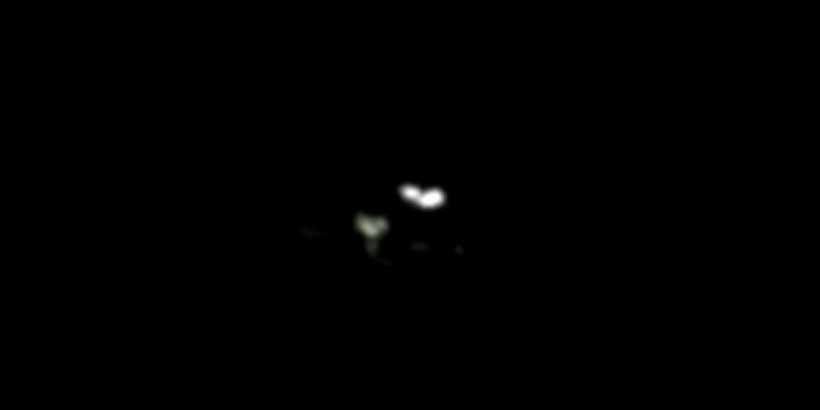 If you see the video to the end, you will notice that there are a whole fleet of UFOs. The partly shaken recording does not prevent us from discovering multiple lights in the footage.

Scandinavian UFO Information (SUFOI) immediately turned this UFO sighting down, claiming it was just Chinese lanterns. But the two pictures above with the two large objects seem not to resemble Chinese lanterns.

The lights on the first large object seem to render up an actual fixed structure behind the white glowing lights. The other large object has a clear green and white light, not really the typical Chinese lantern-profile with the orange-reddish glow.

I wonder why SUFOI chose to go with the lantern theory alone? Some of the small objects actually have a red glow more than orange. If they were the only type of objects seen I understand. But the small ones are seen together with the large ones. So why they chose to put the blind eye on the large objects is a mystery to me.

I stood in my garden and smoked a cigarette when I suddenly saw a big ball come flying. It flew faster than a plane and was completely silent. Since I could not see it anymore, I looked back from where it first came, and then 2 more, and so it went on for approx. 20 min. There were maybe 50 of them. We filmed it on the phone and took pictures with a digital camera. They flew all along the same route and same height. They were all the same size but one that was maybe twice as big. It seemed like it flew closer, and not quite the same path as the others, but ended with flying the same course as the first and then disappeared into the horizon. It ended with I could not see them anymore because they were blocked from my field of view of trees and roofs.

The UFO sighting in Denmark is an interesting case, because the same type of mysterious light, specifically the large objects, were also observed in North Carolina in Hendersonville on October 17, 2011, one year and 70 days after the sighting in Denmark.

The North Carolina UFO was observed by three witnesses who recorded the object, as it traveled across the sky, exactly as the UFOs did in Denmark. I think the sighting in Hendersonville supports Femse´s sighting in Denmark, because it reveals that she was probably not the only one who saw this aerial phenomenon.

The UFO from North Carolina that was reported to MUFON under case number #32678, have the same profile as the one filmed in Denmark. It has one big light and two smaller ones. There is indeed some correlation in the characteristics here, please go and see for your self in the North Carolina UFO Sighting

I made a short video analysis for the UFO fleet sighting in Denmark, pointing out the large vessels seen in the footage. Here you can see more about the North Carolina UFO relation. The video was made in relation to an old blog I do not author anymore.

What do you think about this UFO fleet sighting? Are they all Chinese lanterns or is this actually the UAP (unidentified aerial phenomenon) unfolding right in front of you? To say that the two large objects are real UFOs together with a flock of Chinese lanterns would also be quite an amazing thought.

In my humble opinion, this was one of the largest UFO sightings in Denmark caught on video, which should have had its own place in the history of Danish ufology. But our local reporting center SUFOI turned it down…

Other fleet sightings in Denmark