UFO sighting on warship in the North Sea is about a UFO sighting I had on a navy ship I was stationed on back in 1994. It happened while we were on an exercise somewhere out in the North Sea. As 25-year-old, I was voluntary military service in the Navy, and after elementary school of the Navy, I ended up in the officers fair at the 84-meter long corvet Peter Tordenskjold.

In this connection, I participated in an 11-day exercise in the North Sea and Skagerrak, held from 11 to 22 September 1994. Part of the exercise was devoted to submarine hunting, but in addition, the corvet also had the task of firing a Sea Sparrow SA missile.

Storm in the North Sea

Three days into the exercise we went into a storm that reached 28 meters per second. The wave heights were measured to approximately 15 meters. It was my first real cruise with this ship and definitely an extraordinary mind-blowing experience I will never forget. Despite widespread seasickness among the crew 4-5 days in a row due to the storm, everyone met their duties.

The North Sea is a part of the Atlantic Ocean and is located between Great Britain, Scandinavia, Germany, the Netherlands, Belgium, and France. It has an Average depth of 95 m (312 ft) and a maximum depth is 700 m (2,300 ft)

When the storm had finally subsided 4-5 days into the exercise, we started looking for submarines. We had been told, that if we saw something that could indicate a submarine, we should advise it to the officer in charge on the bridge.

When I finished my job with the evening meal in the officers fair, most likely on September 16, 1994, I walked up on the upper deck. It was around 8.00-8.30 pm and I sat down on a bench few meters from the port side entrance to the bridge.

There I sat and relaxed with a cigarette and scouted out over the water, to see if I could spot a submarine. At that time it was almost dark, only a slight cut of sunlight on the horizon was left, which was slightly reflected on the sea level a good distance away.

UFO shoots up from the North Sea

Suddenly, a dot of blue light shoots up from the sea. It was about 2-3 km away in a precise vertical line and stops abruptly mid-air about 150-200 meters up. As it stops, it lights up and now acts like a little sparkling star with a mix of blue and green color. The ascend of the blue dot went so fast, that I would think it happened in less than one second.

Since we were already alerted that there were submarines out there and we should keep eye and report to the bridge if we saw something, I was obviously on the mark and counted the seconds from the moment the object stopped mid-air. I managed to count five seconds, and then the light went out like it was switched off, and I didn´t see it again that night.

I made the animation above as authentic as possible, in an attempt to show you exactly what I saw. You will probably have troubles seeing the blue light shooting up, but its there. First, then the UFO stopped mid-air, it lit up as a sparkling star.

Definitely not a distress signalling rocket

Well, I was not fully aware of what I had just seen. Definitely not aware of a sighting, because I automatically assumed my observation was related to the submarine hunt. Maybe some kind of signaling rocket that was fired from a submarine? But we had not learned anything about other signal rockets, than the red distress signalling rocket. Its a parachute rocket with red flare you may use when you need to be rescued at sea.

After the observation, I informed the duty officer on the bridge what I had seen. I remember he asked me three times in a row if I was colorblind, which I rejected all three times. I held on the blue and blue-green color I had seen. Then we found the direction of the compass where I had seen the object shoot up from the ocean.

After that, the officer returned to the bridge and I sat back on the bench again. I sat there 5-10 minutes more before going down to the cabin. While I sat there, the ship began to turn in the direction of where the blue-green star ascended.

Not aware of my UFO sighting

Not at any time, during and after the observation, or while speaking with the officer, I felt something strange about the situation. I just assumed that it was a kind of signaling rocket fired from a submarine in relation to the exercise that was going on. 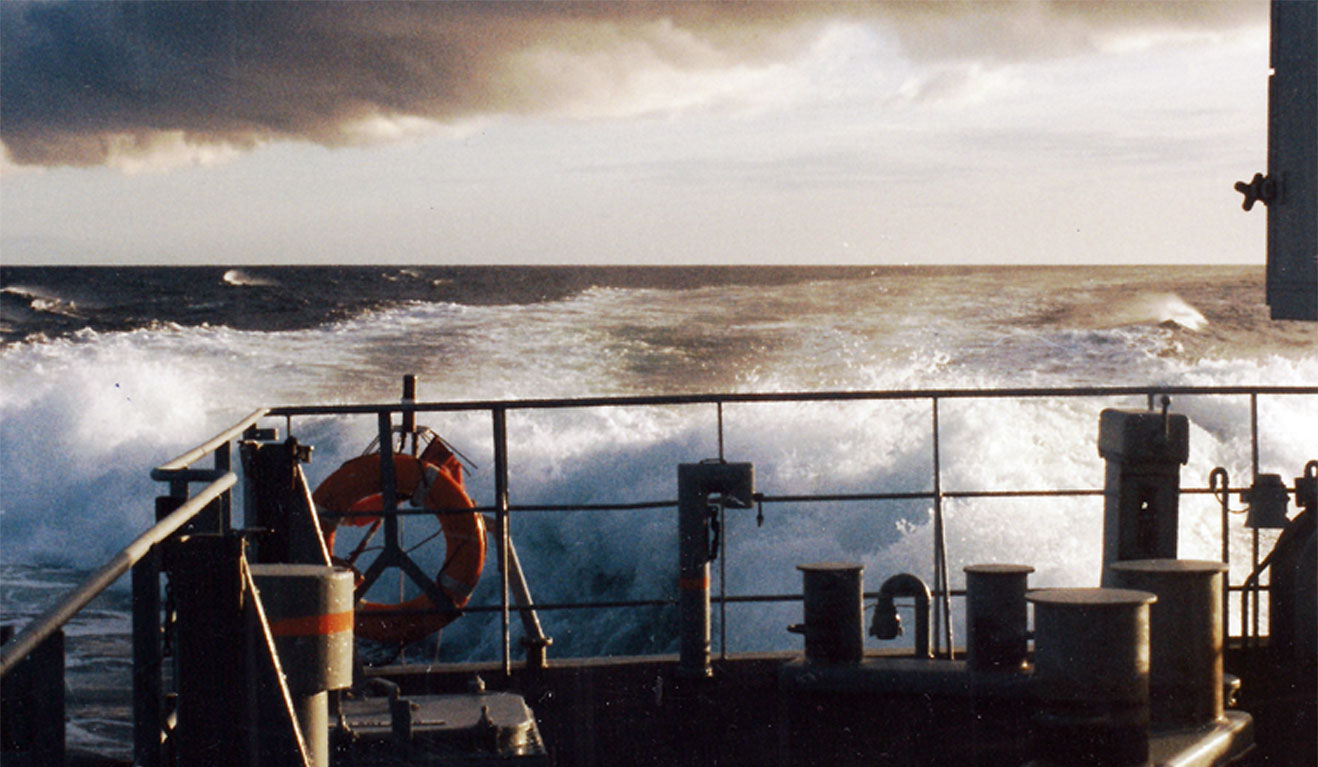 It was first several years after when I thought about the incident that it dawned on me, that it was strange this light could rise so fast and stop abruptly mid-air? And also that it was NOT floating with the wind at all, it was dead on in its position all 5 seconds before the light disappeared. So, in many years I was unaware that my observation probably was a UFO sighting.

The corvet Peter Tordenskjold: Image (information is outdated the ship was retired 2013)