UFO salute with three unidentified flying objects in one photo was actually the very last photo I took on May 25, 2017. I shot 173 photos that day and this is the very last one. In the end of the long photo session in the field, the unidentified aerial phenomenon swarmed the sky around me. And in this photo, there are two elongated objects and one spherical. One of the objects seem to cause some kind of condensation and it looks like it flows upwards from the UFO. I call it the UFO salute… 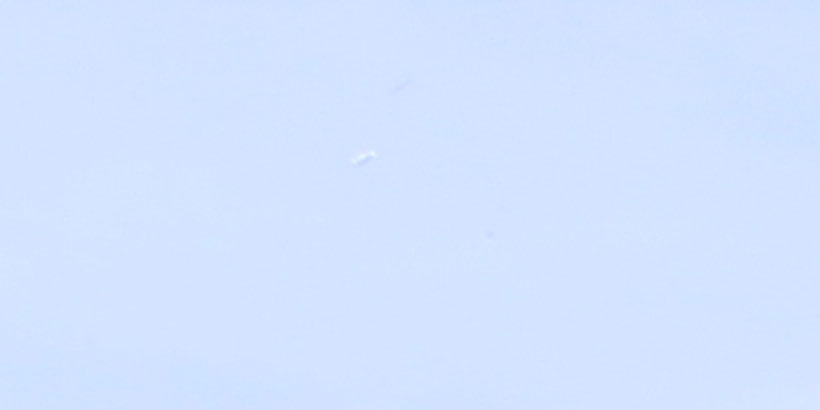 The above picture is cropped but unedited. It has been magnified 200% and you can barely see the two large elongated vessels and the sphere. The same picture was processed with Auto Contrast and Brightness in Adobe Photoshop see below.

The two elongated objects look cigar-shaped in the picture above. They could also be disc-shaped but without the hump. They do not look like flying saucers to me. The spherical object, the sphere, could be related and acts as a probe maybe?

The UFOs are clearly there and one of them cause something that looks like condensation. An aircraft can cause natural condensation as vapor trails or a vapor cone but this seems not to be a terrestrial aircraft.

This is not a normal craft and the so-called condensation or whatever it is looks strange. It has three main sources on the object (see below), three concentrations of the white substance. Above it, it looks like it is drifting off the object (see above).

Explore the condensation-TAG for more on these types of objects.

The UFO salute photo ended my investigation inside a secluded pasture in relation to a creature sighting I had there the day before on May 24, 2017. That investigation produced 173 images and created this UFO photo gallery