The case of strange lights seen in outdoor wildlife camera videos finally seems to have found a logical explanation. 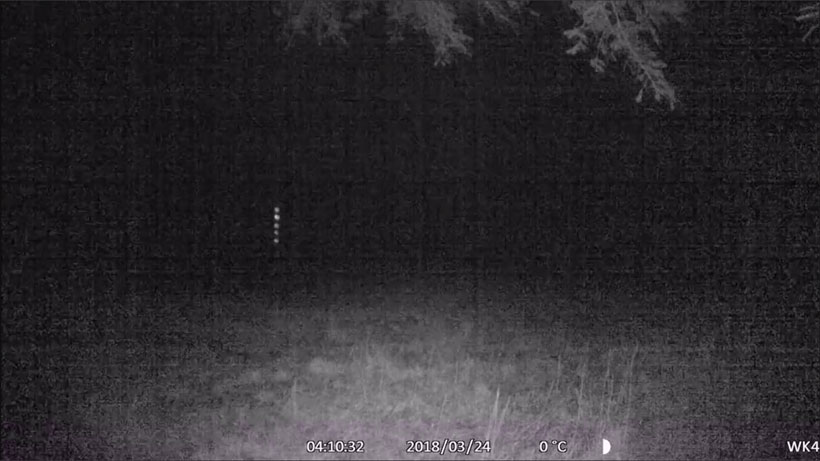 Since outdoor wildlife cameras have become a household item, a handful of supposed UFO videos with strange moving lights have appeared on the internet. Some videos uploaded to Youtube and other places shows a strange row of vertical or horizontal lights that somehow moves around in the frame. The video above shows strange vertical lights recorded in Denmark March 24, 2018.

The Danish UFO reporting center SUFOI (Scandinavian UFO Information) recently had a similar case from Hoejer, Denmark, March 24th 2018. After many repeated reviews of the video sequence above, it is the photographer’s opinion at SUFOI, that the strange lights are due to a reflection in the cover glass by one of the vertical rows of diode lights in front of the camera. The reason why it moves around in the footage may be because of a loose cover in front of the diodes moving in the wind.

I have an outdoor wildlife surveillance camera my self. If I position it behind a window, the infrared light gets visible as a reflection in the window. Apparently IR light gets visible when it´s wavelength are broken up in the glass of an ordinary window. Similar strange effects are also seen in the below and before accessible video with the deer and two unknown lights on top of the deer.

As you could have seen in the above video, the reflection in the supposed coverglass seem to be intensified when the deer is in front of the wildlife camera. In this situation, the deer seem to catch the IR light, which is thrown back at the camera as visible light. The two points of light right above the deer may be the diodes attached on the camera.

The video above also shows a row of lights moving around while animals are passing. The last image shows no animals and the lights are centered. It looks weird but it must be the diodes. It seems not to be a loose coverglass here but simply the passing animals that cause some weird interactions with the IR light.

The last video above is much more difficult to explain. I haven´t found any outdoor cameras with so many diodes in one row. These seem to be stationary in the same place both then the animal is there and not…

As I said before, this phenomenon seems to come only from outdoor wildlife surveillance cameras. They have sections with rows and columns of IR diodes behind a coverglass. So the strange lights that show up as rows of lights, both vertical and horizontal, may be caused directly by the IR diodes in the camera itself. 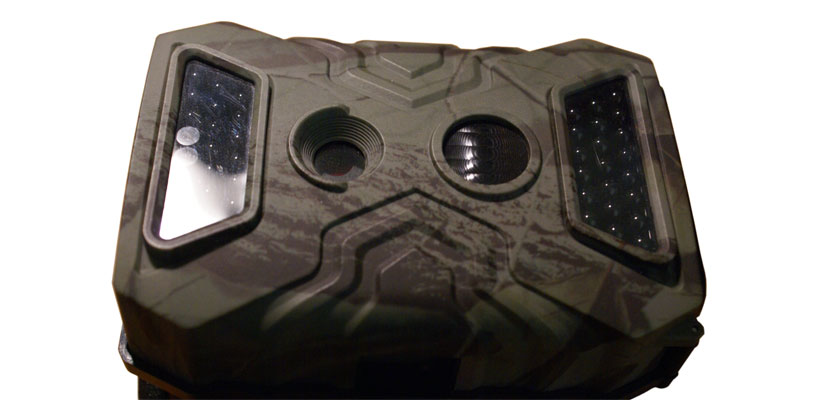 On my own wildlife camera (above picture), the cover glasses seem to be securely attached to the camera housing with glue I think. There is no way the wind can move that. But when these types of cameras are in nature and exposed to all kinds of weather, the glue may become porous and weakened over time? And when the coverglass gets loose, wind can move it slightly enough to produce some UFO video…

IR wavelength not detectable by the naked eye, but…

Infrared (IR) light is not visible to the naked eye. IR light has a wavelength that our eyes cannot detect. But when IR light hits the glass of a window, the wavelength gets broken up in different wavelengths in the light spectrum. And some of these wavelengths are visible to the naked eye. Maybe the type of coverglass used in these cameras has a flaw in relation to reflections? It cannot be intended that the IR diodes get visible on recordings, but they actually do sometimes apparently.

In other videos we see the same type of reflections actually moving around with the animals, indicating that it must be the camera itself causing this. See this thread on a french forum for more examples of this issue.